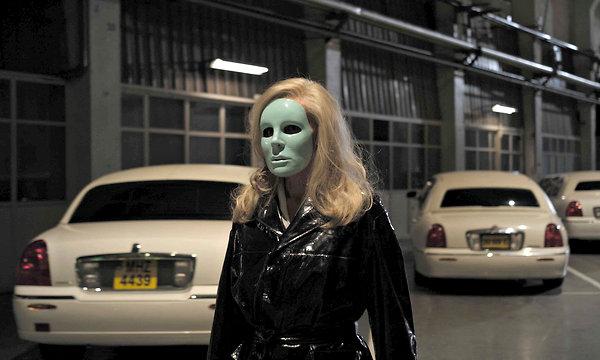 The phrase “love letter” is one of the most pervasive yet stale of critical tools used to describe an object so imbued with its makers’ passions that it cannot be properly classified in any other way that forgoes the personal. Writer/director Leos Carax’s Holy Motors is a film swiftly building a fierce reputation for just such reasons. Indeed Carax’s film was recently named the best film of 2012 by the prestigious (and usually delightfully pretentious) film magazine Cahiers du Cinéma. The film’s release is also noteworthy as it is the first feature film made by Carax since 1999’s Pola X. Viewing the film it is easy to see why it has been received so warmly in critical circles as it foregrounds themes which play into the tastes of contemporary Western film criticism. However, what makes Holy Motors an exceptional movie going experience is Carax’s ability to balance the films loftier pursuits with the equally ethereal responses of visceral reaction.

Set over the course of a single day, Holy Motors follows Mr. Oscar (Denis Lavant) as he is chauffeured around Paris in a lavish limousine attending various “appointments”. At these appointments Mr. Oscar transforms himself into a variety of characters and performs what we could call scenes or sequences for an array of invisible cameras. We of course don’t see these cameras but are assured they are watching, implicating us as the intended recipients of these dramatic moments. Mr. Oscar inhabits the lives of a beggar woman, fathers, a hit man, a husband, motion-capture performer, a subterranean id named Monsieur Merde, and more. His only direct contact with the business that employs him is a brief encounter with an ignominious man with a birth mark and the limousine’s driver Céline (Edith Scob) who doubles as his only real confidant. As the day progresses Mr. Oscar becomes increasingly weary of his work, taking to drinking heavily and smoking drugs. As he nears the end of his daily appointments the line between reality and fiction blurs and folds in on itself as we begin to question what we assume about Mr. Oscar and his work.

Typically Holy Motors is the sort of film I abhor. The setup and much of the film’s underlying themes heavily gesture at those types of academic buzzwords that instantly cause one’s eyes to glaze over. The film explicitly trades in bread-and-butter critical concepts such as post modernism, artifice, meta-narratives, and the simulacrum. This is the sort of thing that for me usually smacks of cinematic self-flagellation in some sort of pious attempt to undermine the “evil” of constantly shifting notions of fun and entertainment in popular media. (Not that these sorts of films don’t have an important role to play, but they are certainly less likely to become critical whipping boys than more “popular” films.) But while for many conversations on the nature of art, media, and lived experience are where the meat of Holy Motors can be found, Carax also knows that part of what makes the movies “THE MOVIES” is that complex process of identification, fun, entertainment, empathy, and nostalgia. Much of the credit must be given to Denis Lavant’s performance as he enacts one of the true chameleon performances in the cinema. The film maintains a delightful yet disturbing balance of absurdist comedy and the dangerous confusion that results from living in a world in which fictions are the most concrete identities we can hold on to.

Holy Motors refrains from becoming too nostalgic for the celluloid cinema gone by. This is precisely enacted in the most visually dynamic sequence of the film in which Mr. Oscar performs acrobatics, fires a machine gun, and fucks all within the confines of a motion-capture rig. While Carax has openly stated his distaste for digital photography he employs it with relish in this sequence (and throughout the movie), reenacting and condensing nearly a century’s worth of what Pauline Kael had defined as the “Kiss Kiss Bang Bang” of popular movies. We see in this moment both the beauty in the process of technology as well as its potential perversion of primal humanity.

The film does suffer from some missteps during the film’s third act as Mr. Oscar is required to enact a more sincere examination of a dying melodramatic character. Up until this point we are showered with all manner of hyper-reactive, absurdist characters. But once we are introduced to this scene the film screeches to a halt. It’s as though the segment was strategically placed to make us aware of the duration in which such events may occur in actuality. But given the films fluidity and playfulness with the real and the manufactured the scene comes off as misguided and awkwardly long. This sentiment unfortunately extends into the following segment in which Mr. Oscar accidentally encounters a performer he worked with previously named Jean/Eva (Kylie Minogue). And while this segment concludes with a bittersweet recall of the superficial reality Mr. Oscar lives, it nevertheless suffers from its preoccupation with attempting to convince us of Mr. Oscar’s essential humanity unfettered by the show.

Holy Motors achieves something inspired in that it manages to coax a personal, sincere narrative out of its inherently highfalutin' nature. The film's philosophical meanderings work in concert with its unanswered mystery to allow us enough space to engage with its characters while provoking us to consider our relationship to the screen. Never does it feel as though we are watching someone spill their thoughts on to a screen for the sake of a self satisfying diatribe. What becomes so exceptional is how the film embodies the works, genres, and character types its referencing with such total investment that we can allow ourselves to be wrapped up in their narratives even for the 15 minutes we spend with them. Like Mr. Oscar, Carax both embraces and challenges the uncertainty and the slippage that happens once the film leaves the filmmakers’ hands.