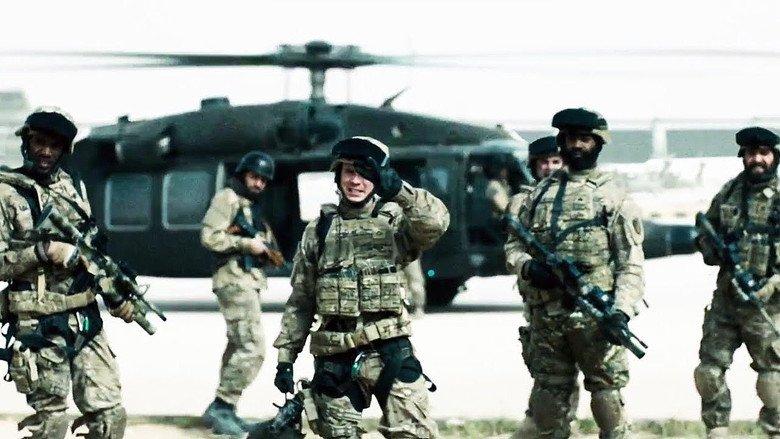 There comes a time when saying a movie looks good or seems to be competently made is no longer complimentary. Tom Green (not to be confused with the comedian) is an auteur who appears to have a grasp on what makes material look cinematic, but somewhere down the line and smeared all over the frames of Monsters: Dark Continent is a confused filmmaker begging for guidance. Sadly enough, his pleas must have went unheard and his sequel to Gareth Edwards' calling card suffers mightily from an identity crisis.

This "sequel" picks up a decade after the events of the first film and the creatures have begun to spread globally. Michael (Sam Keeley) has enlisted in the military to fight the creatures and is getting ready to begin his deployment overseas. Once there he and a small group are tasked with entering an infected zone to rescue some captured comrades- and that's pretty much it. Although that particular premise as written gives this movie more credit as to its connection to the original than most of the footage in the film.

One of Monsters: Dark Continent's most egregious sins is that is has zero purpose. The second, aside from brief glimpses of the tentacled monsters, it's not a sequel to Monsters. Instead what it is, is a badly scripted war movie that was likely turned down by every studio in existence with snarky notes that said, "add creatures, then we'll talk." So Green did exactly that. The movie begins with some ham fisted noir-esque grizzled voiceover, turns into war movie as visualized by a grade-schooler, then ends as a pretentious art film. All the while the main threat is sidelined in favor of painful war cliches and horrendously paced melodrama.

Gareth Edwards' Monsters did much with very little, but it was by design. Regardless of rather or not he had any intention of it spawning a sequel, it's doubtful this is what he had imagined. Green's sequel seemingly with more tools at his disposal and an open palette to create something unique opts to focus on everything but the titular menace. The war being fought in Monsters: Dark Continent is just like every other war movie anyone has ever seen, but with absolutely no stakes, no historical relevance, and no connection to the giant foes that are supposedly taking over the world.

The best thing one can possibly say about Tom Green's Monsters: Dark Continent is that it sure does look like a movie. Say what you will about the casts ability to make grossly immature dialogue seem rugged, manly, or even remotely theatrical; in the end it's still pointless drivel. None of Edwards original thematic material even bleeds over into Monsters: Dark Continent and in the end it's "legacy" is tainted by over-stylized overlong muck that no one should have to be subjected to.