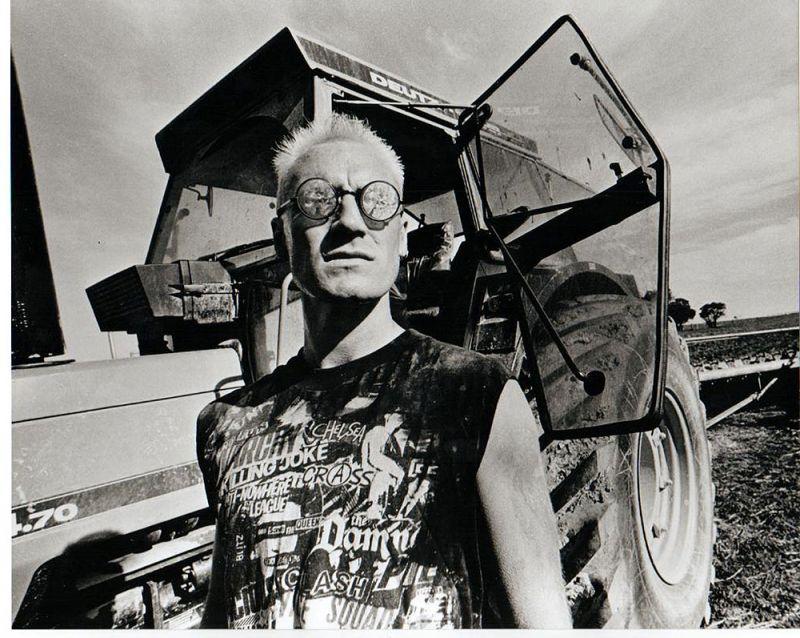 “Incident at Raven’s Gate” was re-titled “Encounter at Raven’s Gate” presumably because international audiences could more readily glean its extraterrestrial content if it shared a three syllable word with Spielberg’s seminal alien visitation flick “Close Encounters of the Third Kind”. Whether or not this was a marketing decision the two films do have enough in common to make the title similarity work both as a thematic reference as well as an homage. The two films share a paranoid tension and both hitch rides with characters that are having their lives dismantled at least partially by phenomena they cannot explain. The major difference between the sci-fi thrillers is that Rolf de Heer’s 1988 Aussie alien tale features no sense of Spielbergian awe or the promise of dreams fulfilled through answering the call to adventure. In fact, by the final crane shot over the outback we realize that an ironic “careful what you wish for” reality has been visited on the surviving protagonists of Raven’s Gate.

The film follows two brothers, Eddie and Richard Cleary who live, along with Richard’s young wife Rachel, on a vast, arid Australian farm. Eddie is fresh out of jail and while he is keen to help his agrarian brother build the farm into something prosperous, he is also struggling to shed his wild side. Eddie is shtupping the local barmaid to the chagrin of a jealous cop named Skinner and additionally has at least one group of drunken brigands who would like to provoke him into a quick trip back to jail. Then there’s the sexual tension between Eddie and Rachel, who are closer in age than Rachel is to her husband Richard.

One night a neighbor of the Cleary’s disappears in a hail of ‘Close Encounters’- styled bright lights. The neighbor’s house is transformed into a sort of Tarkovskyian vortex that turns some of those who enter into dangerous loonies. One of those who is afflicted is Eddie’s nemesis Skinner. After visiting the sinister abode the crazed cop proceeds to kill his coveted barmaid and take her corpse to see “La Traviata” at the Sydney Opera House.

Back on the farm the alien visitors have begun zapping vital water stores, and tensions among the Cleary’s are starting to boil over. Things worsen when Eddie is forced to kill Richard’s dog after it falls under alien influence. Eddie tries to make Richard see that what is going on at the neighbors’ house is the cause of all the strangeness but Richard is convinced his brother is becoming dangerously delusional. To compound matters further Richard is aware that Rachel and Eddie have become intimate. When the elder Cleary decides to visit the alien vortex this smoldering family triangle erupts in a violent final confrontation.

This film feels like a cross between a Red Scare movie and an exercise in zombie-free Romero-styled populism. Paranoia and the authoritarian valuation of information and secrecy over the lives of average folks factor prominently in the story. The menace here is not an ‘Evil Empire” nor is it the undefined alien force laying quiet siege to Raven’s Gate. The grave threat to this tiny outback berg is a collection militant scientists who are using the people of the town as pawns and lab-rats, in order to conceal the presence of extraterrestrial visitors. The people of this rural area live without surplus, physical or emotional, and when their ratios are interrupted the consequences are tragic. For the Cleary’s in particular, the disruption amplifies the small frictions of their daily struggle to live in triangular harmony and makes their already difficult situation completely untenable.

Rolf de Heer tries to keep a lot of balls in the air during the 90 minutes of “Incident at Raven’s Gate”. As a character piece it is a moderate success; giving us understated people who aren’t free from cliché but do respond like actual human beings to their circumstances. As an alien invasion movie it leaves a something to be desired. Where it mimics the practical light shows of “Close Encounters” and gives us eerie alien post-scripts of circles burned into the ground and dead sheep, the film is filled with tension and portent. However by the end of the story we feel like we've taken too many trips to the well and the eerie overtones begin to dry up in the narrative's sandstorm of ambiguity . While these choices do feel like the deliberate movers of a calculating director they will still result in a wholly unsatisfying conclusion for those who are looking for a balls-out alien invasion.

At its best “Incident at Raven’s Gate” is a tense, character driven thriller with the strong feeling of better films that preceded and followed it. Echoes of Peter Weir’s “The Last Wave”, Matthew Saville’s “Noise”, and P.T. Anderson’s “Magnolia” all ring through Rolf de Heer’s film, making it likely that it not only borrowed from, but may have even influenced some pretty thoughtful filmmakers. That fact doesn’t elevate it above the level of an average alien thriller but it does mean there is a good deal here to appreciate. Clever, at times playful shooting, nice pacing and some really inventive sound design combined with a fun 80’s soundtrack make this film both an easy and thought-provoking watch. Limitations of narrative coherency, sparse alien action and dated FX work may detract from the overall enjoyment but shouldn’t totally invalidate the power of its mystery and slow-burning tension. I don’t know if the world needed a dark reworking of “Close Encounters of the Third Kind” but if you ever wondered what that might look like, wonder no more.