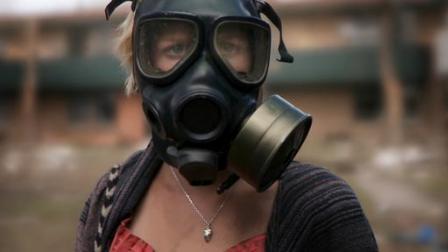 What do you want from a movie called “Monsters.” Me, I was hoping for Sigourney Weaver fighting a brood of uglified acid-blooded Charlize Therons but knowing that wasn’t going to happen, I would be willing to settle for some giant-sized monsters effing some ess up. While there were indeed giant-sized monsters and there was some evidence indicating that at some point ess had, to a certain degree, been effed up, “Monsters” was more the story of the mismatched and the misunderstood finding love under unlikely circumstances. In other words, not at all what I signed up for.

Let’s get this straight right out of the gate: I have no problem with movies that subvert my expectations. In fact, there are few things that delight me more than a movie that zags when I expect it to zig. On paper, “Monsters” sounds like the kind of left-field approach to genre filmmaking that usually has me swooning: it’s an alien invasion, but instead of being large scale and Michael Bay-ified, it’s scaled back so much that the ETs are more or less the backdrop to a romantic road adventure story. I love this film on paper. On my TV, it put me to sleep.

In the near future of the film, a space probe returned to Earth with a few hitchhikers. These hitchikers grew into ginormous tentacle-y things which quickly turned most of Mexico into the “infected zone” and caused the authorities to build a huge wall between the US and Mexico (get it?). A publishing tycoon hires one of his photographers to escort his daughter out of the infected zone and back to the US for her impending wedding. Getting through the infected zone proves to be more difficult than expected and along the way the two get closer and learn about the true nature of the creatures.

As for the true nature of the creatures (spoiler alert for the very obtuse) they’re here to make love, not war. This is supposed to be a surprise but since every other modern sci fi movie pulls the whole “who’s the real bad guy here” gambit, it’s not exactly hard to guess. By the midpoint of the movie when the aliens first appear and proceed to not really do anything more threatening that waving a tentacle about in the background while people run around and shout, most seasoned moviegoers will just nod and go “oh, it’s that kind of movie.” One of the biggest problems with the movie is that there’s never a sense that any of the characters are in any danger. Sure, it’s inconvenient that they have to trek across northern Mexico but inconvenient is about as high as the drama ever gets. The aliens hardly even factor into the story – with a minimal amount of cuts and reshoots the heroes could be running from political strife or disease or any other background boogeyman. Instead of a low-key story in a high-concept world, it’s a low-stakes race across an interesting but ultimately inconsequential landscape.

While “Monsters” might commit the cardinal sin of a movie with such a lurid title – it’s downright boring, it does deserve kudos not just for taking a risk in its concept but for being a small film that feels like it takes place in the shadow of a summer blockbuster and doing so on a shoestring budget. Thanks to some well-thought out and integrated CG shots and some clever use of actual hurricane-stricken locations, “Monsters” looks like it cost exponentially more than its sub-million dollar budget. I’ve always believed that less is more when it comes to CG and I’ll take a believable tentacle sparingly used in the background in the dark over a computer generated character farting its way through a whole movie any day of the week. That’s the tragedy of “Monsters”: if it had the story to back up the concept and effects it could have been something truly special. Instead it’s closer to a snoozy, charisma-deficient road trip through “Cloverfield” as reimagined by M. Night Shymalan.