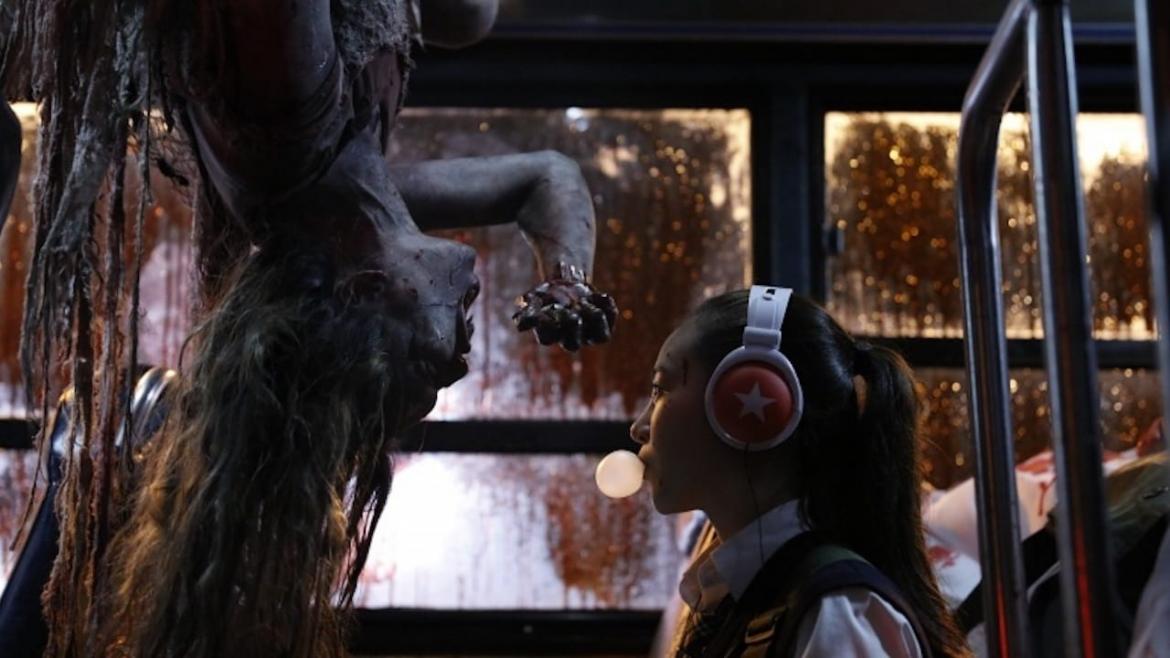 With a title as abrasively silly as Mon Mon Mon Monsters one might assume this is some Taiwanese version of a Scooby Doo mystery. Let me tell you, Mon Mon Mon Monsters is not that movie. Not even close. In fact, one could argue there is not one iota of fun to be had in this bizarrely cruel little horror film that otherwise looks incredible and features some impressively violent sequences.

Focusing on a brutal culture of bullying within Taiwan (yet the commentary speaks universally) Monsters centers on social punching bag, Lin Shu-wei (Yu-Kai Teng), who joins the ranks of his tormentors, hoping for acceptance and to escape their constant physical and emotional attacks. One night they stumble across a pair of flesh eating monsters, though they appear to just be orphaned girls turned feral. Capturing one, they tie it/her in an abandoned building and proceed to brutally torture the monster. As the days drag out Lin Shu-wei feels his humanity slipping and must fight his transformation into a monster himself, all the while the escaped monster searches frantically for its sibling.

Subtlety isn't one of Monsters’ strong suits. The film continuously paints its portrait of the systemic nature of bullying in a culture, never once allowing you up for air. The perpetrators are often enabled and even nurtured within the education system while the victims watch helplessly as their authority figures make statements that excuse rather than deflect the behavior. Yet, as our main protagonist shows flickers of humanity, he too enables the abhorrent behavior and it isn't until the final act that the revelations bleed through all the horrific physical violence to try to salvage the perception of our "hero." But it all is far too little too late. Because you spend so much time enduring the abuse of the "monster" --who is basically a little girl--good will toward any of these characters is out the window and you count the seconds until they are ripped to shreds.

The film takes steps to ensure we know that while the monsters look like feral little girls, they are in fact supernatural. When exposed to light their skin burns and their blood bursts into flames. But all too often does director Giddens Ko linger in unpleasant and uncompromising moments of bullying and torture. Little time is spent trying to puncture the defenses of these characters. As a result, whether or not you can dig deep enough into the layers of Ko's film to find its more pointed commentary depends on if you can accept the endurance test of watching a girl be relentlessly beaten, have her teeth pulled out, and various other atrocities thrust upon her for just under two hours.

There's a lot about Mon Mon Mon Monsters to appreciate. It looks great, the monster violence has all the splattery goods of past Asian influenced gorefests, and the performances are on point. It's a conflicting little film that is effective at what it does, but what it does may prove to be difficult for many to swallow. Mon Mon Mon Monsters is the manifestation of every schoolyard bully holding the audience upside down for their lunch money before setting you down gently to offer a handshake then spinning you around for a wedgie while musing about what good friends you are. Approach with ca ca ca caution.