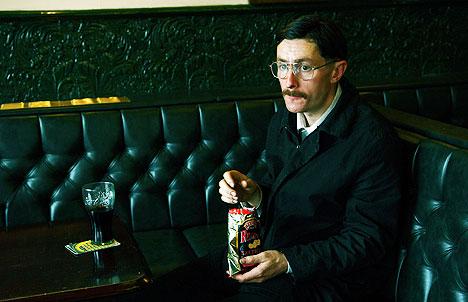 Although it's extremely easy to classify Gerard Johnson's creepy 2009 thriller "Tony" as your standard, run-of-the-mill serial killer movie, doing so severely undercuts the film's power, it's impact. This seedy little tale of one miserable loser's frequently gruesome encounters with an assortment of working-class Londoners is more of a sick and twisted character piece than a straightforward genre offering. The film is slow, taxing, and anti-climatic, to be sure, but it's never dull or uninteresting. It may, however, be too slow for those who like it quick and dirty, but if you're willing to invest a little bit of your time and patience, the rewards are numerous. Figuratively speak, of course.

Peter Ferdinando stars as Tony, an unemployed, socially awkward loner who spends his listless afternoons casually munching cereal while watching an array of low-budget action pictures on his unlicensed television. When he's not ensconced in front of the proverbial “boob tube”, Tony is out wandering the streets of London, randomly interacting with the various locals he happens across during his countless misadventures. Not all of these encounters are positive or productive, especially when the poor bastard is forced to communicate with members of the opposite sex.

During one fateful afternoon, Tony brazenly attempts to score some illegal narcotics from a pair of sketchy hoodlums who, for whatever reason, allow this gangly stranger to accompany them on their impromptu drug run. The scenario unfolds as one might expect: Tony reluctantly enters the home of a tough-as-nails dealer, stares a little too long at the naked woman lying face down on the guy’s couch, and, in the process, generates a fair amount of unwanted attention. Fortunately, his newfound mates quickly calm the situation, and the trio retire to Tony’s flat for some much-needed rest and relaxation.

Once his friends have smoked their stash and passed out, the tone of the picture changes considerably. What started as a relatively inoffensive tale of a man and his personal hang-ups suddenly becomes something altogether darker. Cold, calculated, and completely detached, Tony murders the unsuspecting addicts while they doze, a savage act that effectively demonstrates the man’s fractured state of mind. In order to conceal his crimes, Tony disembowels and dismembers his prey, places what he can’t forcibly cram down the drain into small plastic bags, and tosses the refuge into the river. Since the people he stalks are lowlifes and scumbags, no one is any the wiser.

Gerard Johnson's direction is superb. Instead of delivering the same tired exploitation flick we’ve seen countless times in the past, the talented filmmaker takes a bold and unexpected risk: he makes Tony strangely sympathetic and oddly likable. Sure, he’s a relentless sociopath with homicidal tendencies who spends way too much time watching gratuitously violent films, but you get the feeling that, had his life taken a slightly different path, Tony wouldn’t be knee-deep in human evisceration and financial desperation. Johnson’s script is smart, and it never sells the characters out.

The secret ingredient, of course, is Peter Ferdinando. His performance is the centerpiece of “Tony”, and I seriously doubt the picture could have worked without him. His ability to nail the character’s quirks and ticks without making them seem like a gimmick is extraordinary, as is his ability to generate empathy from the unlikeliest of individuals. You may despise everything the man says and does over the course of the picture, but you don’t hate him for it. Naturally, your opinion of "Tony" may differ greatly, and my ability to overlook his vile deeds may say more about the state of my moral compass than anything else. Still, he’s a fascinating character, and Ferdinando brings him to life with in a way that seems almost effortless.

I honestly can't say enough good things about "Tony". It's a horror movie, a dark and twisted human drama, a character piece, an origin story for a seriously flawed superhero -- however you decide to market the picture, Gerard Johnson's fascinating story of an unstable man and his misguided quest to rid the city of crime is nothing short of fantastic. Peter Ferdinando's performance completes the package, and should garner the gifted actor some much-deserved attention. Even after several very hectic days, I still can't get the movie out of my head. Impressive.