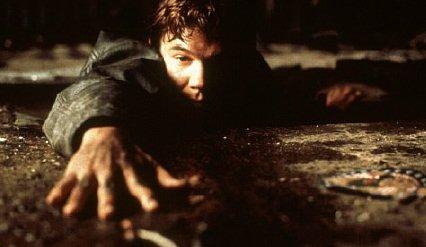 I've talked about my childhood enough in my reviews that I'm sure you've been able to deduce what everyone who knows me knows to be true; I was a pretty weird kid. My favorite movie when I was 10? "Evil Dead". Favorite TV show? "Twin Peaks". Boyhood crush? Mira Sorvino. At some point, my Dad took me to go see "Mimic" in theaters and something about the blonde beauty caused 11 year old me to start seriously crushing. Naturally, I tried to see the rest of her filmography which ranged from awesome (John Woo's "The Replacement Killers") to awful ( the Lisa Kudrow vehicle "Romy and Michelle's High School Reunion"). Fourteen years later, "Mimic" is back in the form of a swanky new Director's Cut. But how does it stand up without the warm and fuzzy feelings of my childhood crush?

Now being 25, the first thing to grab my attention is that "Mimic" was directed by Guillermo Del Toro, who was still a relatively unknown name back in 1997. Being an obscure, foreign director, Del Toro had not yet earned the creative freedom he demands on the set and as a result, has vocally disowned "Mimic", citing numerous creative clashes with the film's producers, the Weinsteins. That said, Del Toro, has come out as saying that this Director's Cut is his attempt to reclaim "Mimic" and that he's happy with the end product. Unfortunately for Del Toro, I think I'm going to have to side with the Weinsteins on this one.

Director's Cuts tend to be a mixed bag. On one hand, you have visionary directors who want to do something bold and daring that get held back by a conservative studio worried about the bottom line and not the art. Ridley Scott's recent "Final Cut" of "Blade Runner" is an excellent example of a great film that was held back by a cautious studio. On the other hand, you have egotistical, bull-headed directors that demand full creative freedom, even if it comes at the price of torpedoing their work. There's a reason why everyone loves "Empire Strikes Back" (it had the most outside influence from people not named George Lucas) yet hates the Prequel Trilogy (full-blown Lucas). "Mimic" falls somewhere in the middle. While Del Toro and the Weinsteins may have had creative differences, there are underlying structural problems that are sadly exacerbated in Del Toro's cut.

For one, the plot is fairly disjointed. Things open in a hospital that's inundated with sick children, the result of a plague-like illness that is running rampant through the children of New York. As the disease is uncurable, the only solution is to kill the carriers of the disease, the common cockroach. A hybrid roach that is genetically created to kill off the infected roaches, is unleashed in the subways and the plague is cured. Three years later, bodies and mysterious insects are showing up in the subway, leading those who created the hybrid insect to question whether the subjects are still alive and evolving at an accelerating rate.

There's an odd shift in tone as the first 15 to 20 minutes focus on the plague pretty heavily. Then, once it's cured, it's never mentioned again. It's an odd decision, as ultimately the plague is simply the driving force behind the creation of the monster, yet it could easily be the subject of it's own film. There's also no visible after effects of the plague, which is inconsistent with the tone of the first 20 minutes, where it seems like some serious "Children of Men" shit is about to break out. In the grand scheme of things, it simply answers the why behind the monsters existence, which could have been answered with numerous other plot devices that wouldn't have eaten up so much screen time.

That's worth noting, as "Mimic" is plagued by serious pacing problems throughout. While the Director's Cut only adds a little over 10 minutes to the running time, it's adding 10 minutes to an already bloated hour and 45 minutes. Clocking in at just shy of two hours, the Director's Cut is simply filled with way too much downtime. While the whole plague backstory is a significant cause, there's still way too much exposition and shifts in pacing. Watching "Mimic" is like driving with a teenage driver, things will speed up and then drop back down multiple times instead of hitting one consistent pace throughout. While you get to the same place at the end, one path is a much more enjoyable way to get there. This isn't that path.

Del Toro is an astoundingly gifted director when it comes to visuals, and that skill is definitely on display here. The underground scenes in the subway are beautifully shot and framed and really highlight Del Toro's talent. However, Del Toro was a young, raw director when he made "Mimic". While the visual prowess and eye for mood-setting are all here, the rest of Del Toro's toolbox hadn't really caught up in 1997. The sometimes questionable acting, disjointed plot and long, drawn-out runtime ultimately doom "Mimic", even in this Del Toro approved Director's Cut. However, his raw talent is on display and obvious despite the other problems which prevent "Mimic" from being at the same level as his other work. That said, Del Toro fans should check this out to get a better understanding of where he started and to get a better appreciation for where he is now. Everyone else? Just forget it exists, much like the man himself.