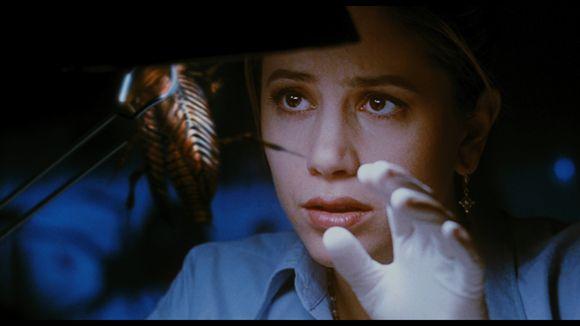 “Mimic” is a film I feel many horror fans look back to through retroactive produced rose-colored glasses. Most of this perception understandably comes from the current status of the film’s director and writer Guillermo del Toro as a cultural icon for both genre fans and international cinema. But at the time “Mimic” was initially released del Toro had yet to prove his filmmaking prowess despite the success of “Cronos”. Regardless there seemed to be the nagging sense that something was always right there underneath the film’s surface, waiting to reveal it as a piece of grand horror filmmaking twisted and broken by studio interference. Hidden somewhere in the film is a surreally beautiful and grim tale full of transgressive bodily fluid, ruminations on the terrors and joys of mother-hood, and the potential dangers of scientific hubris. And while these themes are hardly original— the comparisons to Cronenberg have been made before— the style with which del Toro executes them are what mark “Mimic” as something both intangibly generic and fresh.

Originally released in 1997, “Mimic” follows the efforts of the CDC and entomologist Dr. Susan Tyler (Mira Sorvino) to contain and eradicate a disease carried by cockroaches known as “Stricklers” that has killed huge numbers of children in New York. Susan with the help of Dr. Peter Mann (Jeremy Northam) creates a genetically modified insect known as the “Judas Breed” whose secretions are designed to kill the cockroaches carrying the virus. But what they don’t foresee happening is that the “Judas Breed” thrives, growing increasingly large, intelligent, and capable of, wait for it, “mimicking” humans. (Title High-Five!) Soon Susan and now husband Peter race to find a way to destroy the Judas Breed and warn the world all the while screaming great 90’s science lines like “We changed its DNA!”

Now Miramax and Lionsgate have released a three film Blu-Ray set that not only includes del Toro’s “Director’s Cut” of “Mimic” but also the film’s two sequels; “Mimic 2” and “Mimic 3: Sentinel”. Complete with a more than decent sprinkling of Special Features, the set also includes a commentary by del Toro recounting his experiences making “Mimic”. This is by far where the set’s greatest worth lies. It’s a truly entertaining and enlightening commentary that firmly establishes him as one of the best commentators. Indeed, del Toro covers a wide range of topics including the imbalance of power between directors and producers in Hollywood film, the personal inspiration he took from some of the actors, and his thoughts on the benefits of chaos and the dangers of total control.

I’m not going to spend a lot of time going back and forth between del Toro’s account of what the studio did or did not do. And I’m not going to definitively say if he had his way that “Mimic” would have been better. I honestly don’t have that kind of stake in director vs. studio cuts that are much more about marketing a video product than the film as a cultural product (I’m looking at you endlessly re-releasing “Blade Runner” sets). But I will say that I find del Toro’s reconstruction of the film to be much more engaged with its themes and its characters. Even though the film is only six minutes longer there is a palpable shift between viewing experiences. And while the admittedly “generic” material dealt with here is handled with a greater amount of care and concern it doesn’t feel as though it reaches the heights del Toro hoped for. Still, it’s a far sight more interesting. You can check out a more detailed review of “Mimic: The Director’s Cut” by Angelo under the “Related Content” section to the right.

“Mimic 2” (directed by Jean de Segonzac) and “Mimic 3: Sentinel” (directed by JT Petty) are DTV sequels that you can pretty much guess what you are in for. Each of the films does very little in the way of furthering the mythology of the Judas Breed and they have more than there fair share of non-climatic climaxes and payoffs. But what I did find interesting about each one of the films is how they don’t attempt to reinvent the creatures with each go around but instead let the idea of them continue to inform main protagonists. Rather, each of the films is more interested in focusing on particular generic traditions (the erotic-thriller in 2 and suspense/domestic-thriller in 3) within the context of a world where a species of seven-foot tall carnivorous, man-eating cockroach is a real thing. Each of the films is obviously designed to capitalize on the relatively small popularity of “Mimic” but they do so in a fashion that one cannot easily write-off.

The complete Mimic “Legacy” may not need space in your home collection, but it does provide more than what you might be expecting if you aren’t already a fan. It’s certainly not an incredibly original or consistently well-executed concept. But, that being said “Mimic: The Director’s Cut” and the commentary provided by del Toro are worth the price alone. It is fascinating to hear del Toro’s thoughts on the film and his personal experience dealing with enemies and friends. The film and the director’s comments on it are a starkly personal document of a particularly trying and difficult moment for a filmmaker that succeeded; becoming a nearly Spielbergian name in how cultural products he is associated with are marketed.

Disclaimer: The number score is not for the individual films but the set as a whole.