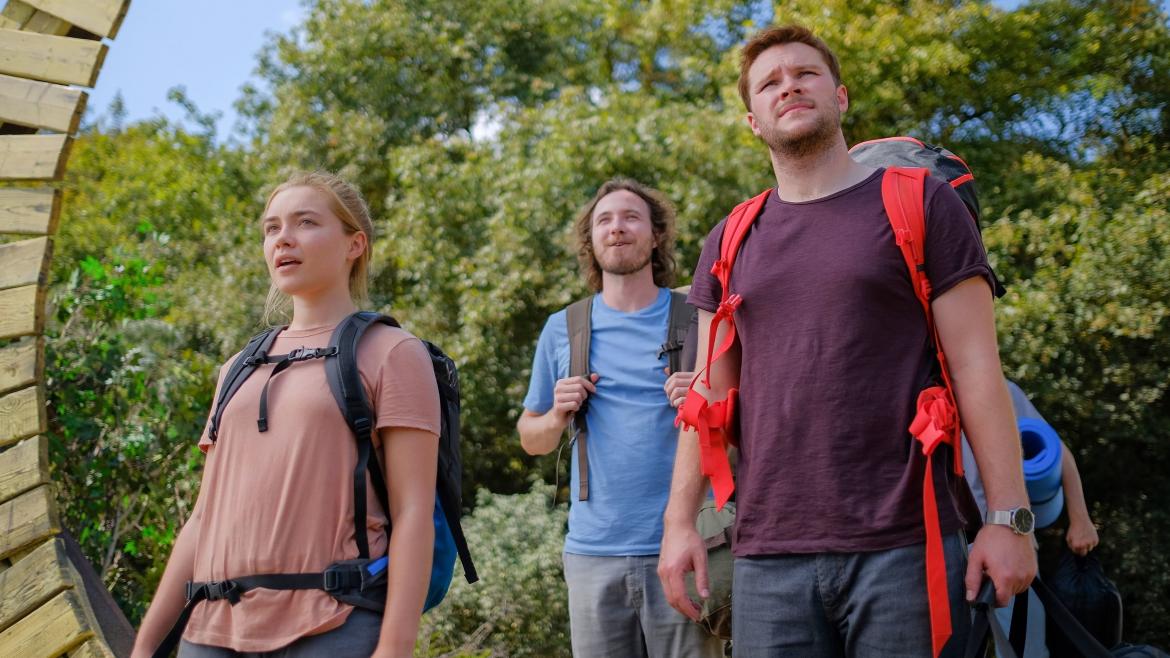 Outside of Ari Aster's imagination, the Swedish Midsummer traditions seem like intriguing cultural celebrations not without certain oddities yet harmless and mostly light hearted. Inside Aster's world, where he combines the late June festivities with a number of troubling pagan rituals, Midsommar puts a unique horror twist on these folk traditions in a way that only the man who made The Strange Thing About the Johnsons can. It's ambitious. It's original. It doesn't always work.

Aster's film follows Dani (Florence Pugh) as she accompanies her boyfriend, Christian (Jack Reynor), and his friends to Sweden where they've been invited by a fellow anthropology major to attend his family's 9-day Midsummer celebration. Dani, reeling from an immense personal tragedy and prone to panic attacks, finds herself growing distant from Christian as the group is thrust into an increasingly bizarre and violent form of the traditional Midsummer that turns out to be much more than they bargained for.

In Hereditary, Aster built a growing sense of dread which for certain audiences fostered moments of laughter out of the uncomfortable horror of the situation. Midsommar, on the other hand, embraces a streak of absurd humor that quite frankly doesn't always blend well with the sure handed drama at the heart of it all. Like Aster's debut feature, there's an incredible sense of confidence in the filmmaker's shooting style. Midsommar is deliberately paced to invoke feelings of dread as the result of how slowly characters react and scenes play out. The humor, however, sometimes shifts tones too abruptly to be appreciated or does not compliment the nuanced emotions in the moment.

One factor consistent throughout is the performance by Florence Pugh as Dani, who is an absolute revelation. Wearing her emotions on her sleeve, Pugh imbues her performance with growing sense of strength as Dani comes to finally see the toxicity of a relationship which has in many ways contributed to her feelings of self doubt and isolation. There is beauty to how Aster has crafted this film to artistically build her arc of perseverance and catharsis, transforming the ritualistic bloodletting into what essentially becomes a break up movie.

Aster shoots everything for a purpose, whether it's to foreshadow later reveals, highlight themes, or to invite meaningful consideration as certain shots linger. Eventually, as the film climbs up through its two and half hour runtime, the increasingly bizarre nature of what is happening to these characters seems, to an extent, indulgent of a filmmaker’s singular whims. Yet it's Pugh's deeply personal and often vulnerable performance that provides the beacon to follow to the end as Aster explores some deeply uncomfortable corners of his psyche.

For many, Midsommar will be a tough pill to swallow; a cinematic placebo of unknown purpose. Yet, in spite of the tonal inconsistencies it invites, the humor is a welcome distraction to the undeniably weird and frequently upsetting visuals. Aster's sun saturated horror film strikes that tenuous marriage of absurd humor and rich folk horror which will surely land sour in the mouths of those not accustomed to the filmmaker's peculiar imagination.