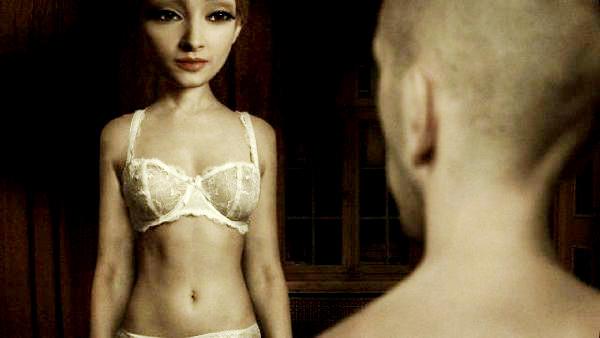 In the not too distant future, the world’s oil reserves have run dry. The major cities of Europe are connected with a massive metro system and most people split their time between soul-sucking jobs and watching television in their shabby apartments. This not exactly unfamiliar world is the setting for “Metropia”, a dystopian Swedish animated film starring American voice actors and directed by a Turkish graffiti artist.

The protagonist of the film is Roger (voiced by Vincent Gallo), a normal guy (as he repeatedly reminds us) living in Stockholm. Roger has a crummy job, a girlfriend he suspects of cheating and a crush on the girl in the commercials for Dangst shampoo. He’s also plagued by a voice in his head that constantly tells him what to do. His quest to find out where the voice in his head is coming from leads him to a conspiracy involving the government, corporations and brainwashing in the most literal sense.

The first thing you should know about “Metropia” is that you have never seen an animated movie like this before. The characters and settings are made of real photographs that are then manipulated onto 3D models for an effect that deliberately plumbs the depths of the uncanny valley. The art is astonishingly lifelike while still being stiff and distorted enough to make watching the film inexplicably uncomfortable. It can also be hard to admire the art style at times because everything is covered with a drab smog of greys and browns which spread out over 90 minutes begins to feel just as oppressive as the Big Brother of the film. The look of this film is still an achievement in itself and even if you don’t care about the subject matter, the film is worth at least one watch if you are at all interested in dark and unique animation.

The story isn’t quite as cutting edge as the art. It’s a fairly standard evolution of “1984” filtered through the sensibilities of Terry Gilliam with a healthy dollop of noir on top. There’s a regular guy caught up in a conspiracy, a beautiful woman who knows more than she lets on, clandestine meetings under the cover of dark and moral ambiguities with enough shades of grey to match the art style. It’s a world which we have visited many, many times before, though rarely as lushly visualized. The world of the film has lots of nice details like the continent-spanning subway and the fact that the controlling voices in people’s heads come not from sinister covert operatives but from everyday schlubs just a notch higher on the social ladder. The problem is, these details don’t always add up or necessarily go anywhere. The oil crisis and massive underground that we learn about in a few screens of text exposition that open the film don’t actually have any bearing on the story. Even the central mind control conspiracy is never explained. Why exactly is this secret cabal going to such great lengths to broadcast voices into people’s heads? Who knows. The controllers act more like they’re playing a video game with no discernable goal than that they are manufacturing consent.

Another frustrating point is that Roger rarely asks any sensible questions of the people he runs into who have knowledge of the conspiracy. You could make excuses for the film by assuming that it’s because he isn’t accustomed to making decisions for himself, but I suspect it has more to do with artificially keeping the mystery alive, much like how the characters on “Lost” never just sat down and pieced together everything that they knew. Any story of intrigue has to take a few liberties to keep the ball in the air but it’s hard to imagine that someone would find out that thoughts have been broadcast into their head and wouldn’t bother to ask “What’s the point?”.

Well-worn story aside, “Metropia” carves out its own identity with its one-of-a-kind look and oppressive atmosphere. The fact that the plot matches the art so well doesn’t always make for a pleasant watching experience, however. The film feels a lot longer than its 86 minutes and the creepy, dingy art style puts the ‘blah’ in ‘bleak’. Despite these shortcomings, the animation alone practically guarantees that “Metropia” will have a cult following, at least until the real world becomes even more indistinguishable from the one the film depicts.