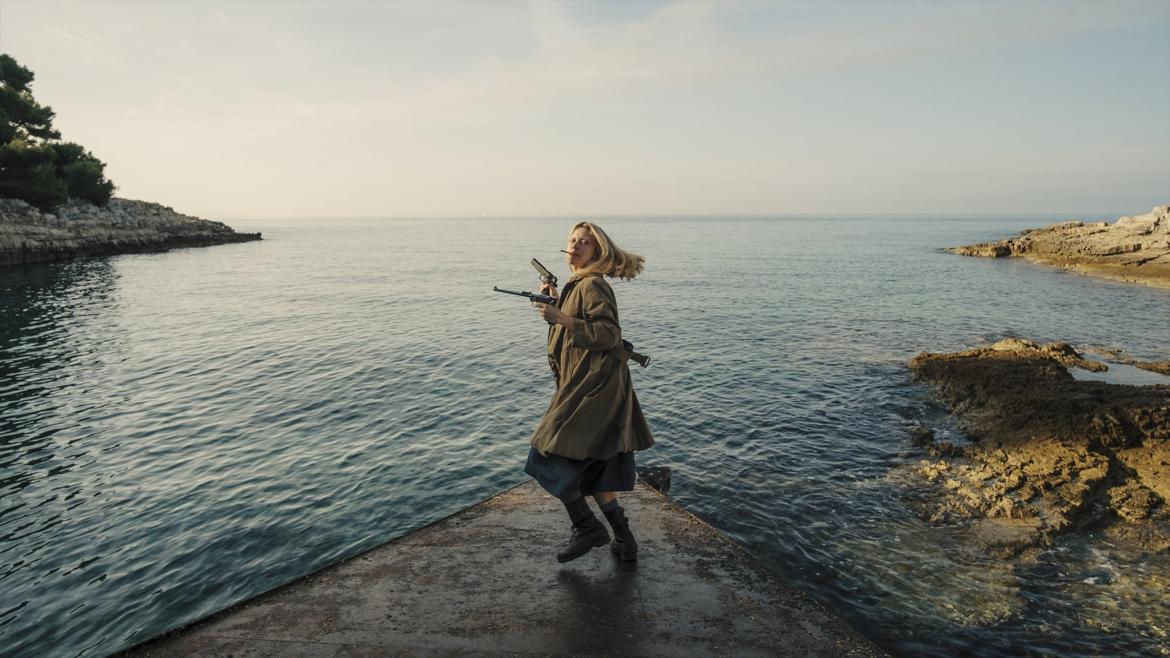 Mary. Alpha. Yankee. Delta. Alpha. Yankee. In the International Radiotelephony Alphabet, this string of words spells “Mayday;” a distress signal. These words, strung together this way, are often used in military contexts (especially by soldiers on airplanes and ships) in dire and life threatening circumstances. Throughout Karen Cinorre’s film of the same name, we hear this message reach out through the airwaves, calling for help.

Mayday centers on a young woman named Ana (Grace Van Patten), a  caterer service worker who is struggling in her day to day life. Her work environment is incredibly toxic and her male supervisor is verbally and physically abusive. When she arrives at this week’s gig, an extravagant wedding,  she is approached by a very emotional bride who asks for her help. She takes the woman to the bathroom where she openly weeps (not tears of joy, but of defeat). Ana’s supervisor finds her in the restroom, rushes the bride out, and screams at Ana. After she shatters an expensive ice sculpture, he screams and chases her into the basement where she pulls the breaker. When power is restored, Ana is alone. She can hear a woman calling, “Mary. Alpha. Yankee. Delta. Alpha. Yankee” and follows the voice.

Next thing she knows, Ana finds herself on a beach, where she meets another young woman named Marsha (Mia Goth) and it doesn’t take long for Ana to realize that this world is not her own. Marsha is a soldier. She lives in a beached naval ship with two other young women named Bea (Havana Rose Liu) and Gert (Soko). The women are engaged in an endless conflict with an army of men. In their communications room, Marsha repeats the MAYDAY call into the radio, and when men answer and try to come to their aid, they send them to their deaths within the dark sea.

Mayday feels a bit like a fairy tale. The whole movie has real Wizard of Oz vibes. Mia Goth’s turn as the young bride from the opening sequence and as Marsha recalls the earlier film’s dual casting. The absolutely gorgeous look of the film further elist a sense of the fantastic. Shot on location in Croatia, the visuals are stunning to look at, and lend to the film’s dreamlike and ethereal feel. The ocean, which plays a pivota l role in the film, is a beautiful, clear blue and the landscape seems otherworldly. In a later sequence, battle and death are portrayed as a beautiful, gauzy dance sequence, catching the viewer off guard while absolutely enamoring you.

Karen Cinorre’s script and direction  emphasize pointed dialogue that our heroines speak to one another. In an early sequence when Marsha teaches Ana how to shoot, she explains that girls make excellent snipers because they are used to being in uncomfortable positions and are used to making themselves invisible. When Ana tells Marsha that she’s never been in war, Marsha responds simply, “You’ve been in a war your whole life.” But despite these dark themes of pain and combat, the film maintains a core of female joy. Living in a world where men are not a regular presence, and where a large network of women protects and supports each other all along the coast, the women are allowed to experience joy and be fully human without gendered expectations.

Mayday plays with genres that are typically gendered male - action, war, - with a cast that is almost entirely female. When asked why she chose to do this in a Q&A, Cinorre answered that she has always seen genre as, “A corset, especially for women.” She expressed a desire to tell a story about women supporting each other through a painful journey and finding healing in that love without having to shoehorn that story or her characters.

With all the things that it does right, the final act of Mayday felt somewhat muddled. Without providing any spoilers, the way that the movie resolves feels like it loses the message, or at least confuses it somewhat. For this reviewer, it will certainly take a second viewing to decide whether or not the ending works for me. But, whichever way you feel about the ending, Mayday is worth the watch. The experience feels like following someone else into a dream, and it is an incredibly enjoyable ride. I look forward to whatever Cinorre creates next.