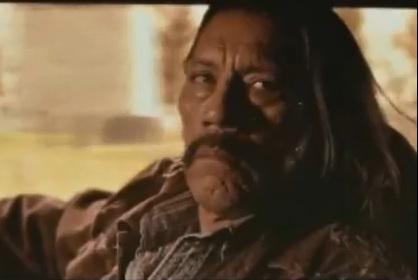 Though my records may be incomplete, "Machete" marks what I believe is a notable Hollywood first: the fake trailer that has made it all the way to the big screen. Conceived as part of the Tarantino-Rodriguez "Grindhouse" experience, full-fledged "Machete" rumors began to swirl almost immediately after the original double-bill's opening. It wasn't hard to see why either, as Rodriguez had hit on a near perfect storm of post-modern amazingness. Combining one part down-market character actor, one part brilliant genre homage, and one part inspired casting, the results were virtually guaranteed. The surprise then is not that "Machete" works as a piece of entertainment, as it would have been hard to fail by that measure, but that "Machete" succeeds as both a comedic vehicle as well as a cultural product with critical insights into contemporary cinema and politics.

We should probably not be surprised by how much of "Machete" survived from its original incarnation as fake-trailer into the final theatrical product. In many cases, it almost seems as if Rodriguez and co-director Ethan Maniquis were able to go back and simply fill in the blanks that the "Grindhouse" trailer left out. As was made clear then, Danny Trejo's Machete is a former Mexican Federale agent now living as an illegal in the U.S. He is recruited as a patsy in a convoluted plot to stage an assassination attempt on the hard-line Republican and anti-immigration State Senator McLaughlin, thus ensuring McLaughlin's re-election. This plot eventually comes to involve an electrified border fence, a gang of vigilante "minute-men," and load of Mexican drug money supplied by super-dealer Torrez, played by Steven Seagal.

On Machete's side, things are equally over-complex. There's Jessica Alba as the Latina immigration agent who comes around to the cause. There's Michelle Rodriguez as the leader of an underground-railroad-like network that assists illegal immigrants. And there's Cheech Marin as Machete's brother, the Padre, who is as deadly with a shotgun as any man of the cloth can be. Of course, none of this even touches on two of the film's best roles featuring Lindsay Lohan and Tom Savini.

If all of this sounds like a bit much, it is.

What raises "Machete" above the level of forgettable cinema though, is the cast and crew's full-on embrace of the concept and vision. That Rodriguez was able to land legitimate talent like De Niro (as wishy-washy as his recent career may be) and Alba (who easily earns a lifetime pass from me), combine them with the under-appreciated Fahey and Michelle Rodriguez and nearly forgotten players like Cheech Marin and Don Johnson, then get all of those personalities to play to a central talent with marginal acting chops in Trejo feels, in the end, like a real victory. "Machete" at many points begins to feel like a bloated mess, but the performances constantly engage the audience, and bring the attention front-and-center enough that everyone's body parts are able to fly across the finish line together.

It's important to note that Rodriguez here has not so much laid new ground -- indeed, he simply firmed up a vision he first presented three years ago. But while "Machete" fits firmly into the genre cycle created with the "Grindhouse" experiment, and arguably continued with "My Bloody Valentine 3-D" and the more recent "Piranha 3-D," this film more holistically and genuinely captures the humor and tone promised by the neo-exploitation revival than any previous work. "Machete" in many ways is the film that Rodriguez has been angling toward since "El Mariachi" led to "From Dusk till Dawn." Now that he's promised two sequels, what will be interesting is whether or not the artistic vision has anywhere to grow.

One cynical view of this type of film, which has been cropping up around the web these days, is that cinema is eating itself. Having moved into a realm of self-awareness that leaves it little maneuvering room, Hollywood is at some sort of crossroads, staring down creative destruction of a unique sort. While it's easy to see -- with films like "Piranha" and "Machete" -- how filmgoers and critics might feel this way, it's also silly to underestimate the ability of the filmmaking community to rejuvenate or even reboot itself. Rodriguez's film opens this weekend against "The American," a stripped-down spy thriller that like "Machete" harkens back to an older cinematic moment at the same time that it careens forward in a new way. While there has been far less fretting over what that film means, it also seems far more likely that "Machete" like "The American" will be simply another marker -- albeit a raucous and enjoyable marker -- along the genre cycle than any sort of end-point. This view also dodges the most important question that we need to be asking of our movies: does this entertain an audience? By that measure alone, "Machete" succeeds where many others have failed.