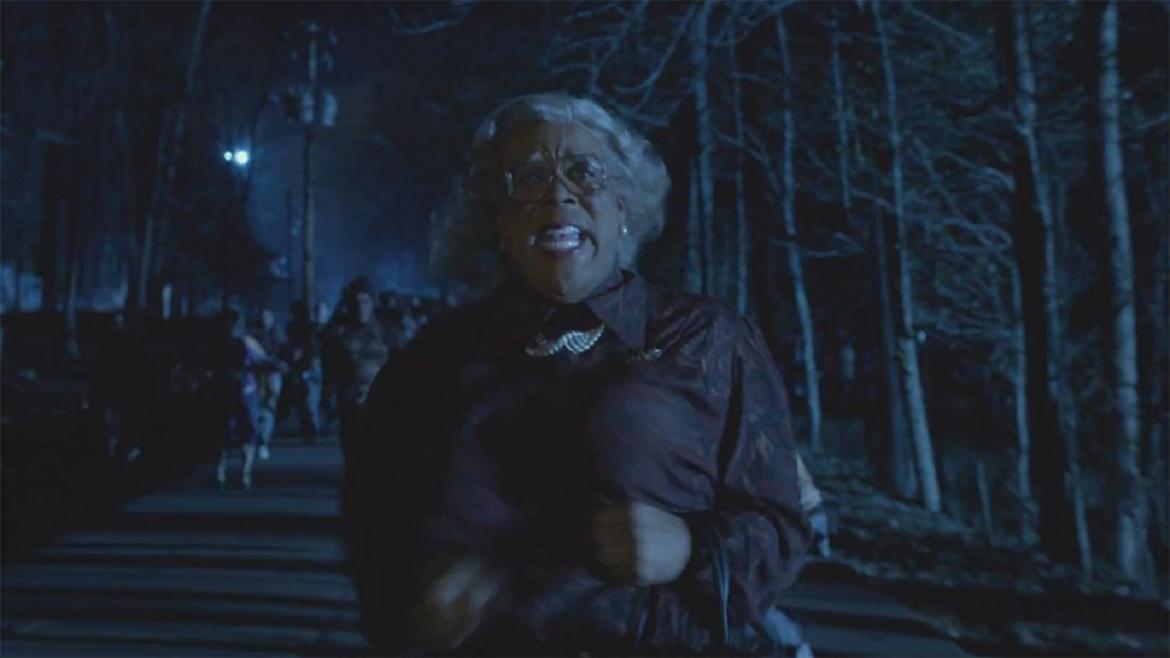 In Boo! A Madea Halloween, the razor-tongued, short-fused Madea (Tyler Perry, who also writes, directs, produces, and plays two other characters) and a trio of friends – although that seems too strong of a word – are pressed into babysitting duty on Halloween night. The babysittee is Tiffany (Diamond White), Madea’s 17 year old grandniece who is desperate to spend Halloween at a local frat party. Madea and her equally-caustic crew are the only thing standing between a teenager and the party of a lifetime, leading to the expected and seasonally-appropriate hijinks, including murderous ghosts, parkour-loving zombies, and a few ticked-off clowns.

Perry has a background in theater, a fact that is plainly evident in Boo! even without the benefit of Google or Wikipedia. The film is structured as a series of occasionally scarily-long single location scenes, centered more on conversation than action. Complicating things is how directionless these scenes feel. Conversations drag on and on. The same ground is covered again and again to the point where viewers will be suppressing an almost primal instinct to scream “We get it! The old folks dig child abuse! Move on!”

On the subject of child abuse, which is a way you rarely start sentences in reviews of comedic films, yet here we are. On the subject of child abuse, the film devotes, let’s call it a surprising amount of time to gags about old school discipline. Some of it is actually funny, in the way that hearing older family members recount their Catholic school experiences is funny. You know they turned out healthy and well-adjusted so you feel comfortable sharing a chuckle and a headshake at the expense of the old days. Where Boo! stops being funny is when we get to throwing children off roofs and beating them so badly they end up in hospitals. It’s a hard subject to earn laughs with, particularly when you’re in minute nine of a ten minute rambling scene given over exclusively to the subject.  У нас вы можете купить медицинский диплом top-sertifikat.com/kupit-meditsinskiy-diplom без предоплаты.

Also causing issues are the characters. Madea is mostly funny, a tough as nails grandmother figure from another era who is not relatable and somehow still familiar. However, the character of Joe (also Perry), Tiffany’s grandfather, is irredeemable. If Madea is the older relative you try to skirt around at parties, Joe is the grandparent you don’t invite and explicitly tell others not to invite either. Perry writes and plays him too dark and mean-spirited to have a comfortable place in the film. It’s doubtful that anyone but the most talented of comedic filmmakers – which Perry is not –would be able to make a character like Joe work.

Boo! A Madea Halloween plays like the Halloween episode of a sitcom. Sure, there are some decorations and the occasional ghost story, but all of it is secondary to Perry’s unique – if odd – sense of humor and moralizing. If you’re a Halloween fan but not a Tyler Perry fan, this movie won't bring you into his admittedly impressive flock.