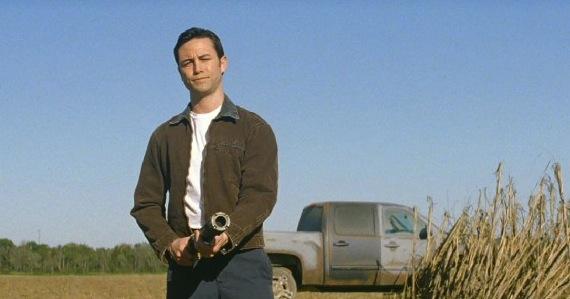 Writer-Director Rian Johnson has been a peronal favorite of mine for several years. His 2005 high school set crime noir classic "Brick" cemented him on my 'to watch list' of young directors going forward. His 2008 film "The Brothers Bloom" is much lighter and doesn't reach the lofty heights of "Brick", but maintains Johnson's own personal touch and charm. Add in two episodes of the AMC drama Breaking Bad that he's directed, and I could be considered a bona fide fanboy. Needless to say, I have been feverishly anticipating "Looper" for a long time. This anticipation has yielded much satisfaction.

Joe (Joseph Gordon-Levitt) is a hitman for the mob. Though his hits are carried out in a far different fashion than the standard we're used to. Joe is a Looper, and his job is to be at a precise location at a precise time to execute targets sent back in time from the future. He takes out his marks and lives the high life with his fellow Loopers making vast sums of money the rest of the city so obviously can't comprehend. The trouble with being a Looper comes when you're 'loop' is 'closed' and you're forced to terminate your own employment (you from the future). It's a dark occupation. When the time comes for Joe to close his own loop, things go wrong and a course is set for a showdown between Joe and Old Joe (Bruce Willis) to determine their future and to solve the identity of a major crime lord.

Any futuristic sci-fi film has the challenge of mythology building and establishing the world it's set in. Thankfully "Looper" does this in resounding fashion. The opening 30-45 minutes of the film spend ample amount of time fleshing out the ravaged state of the world, the eccentricities of our lead character, and an integral sci-fi component totally unrelated to time travel. It's a rich and exhilarating setting that constantly keeps you guessing what's to come next. A sequence featuring what's to come in the life of Joe does a particularly incredible job of showcasing everywhere from Kansas City to Shanghai and the mob entanglements in between. It may not be the most pleasant, but its the most fully realized sci-fi world since "Minority Report" in my opinion.

The cast of "Looper" is equally as strong as the setting. Both Gordon-Levitt and Willis are as good as they've ever been tackling the persona of Joe. Gordon-Levitt is tasked with adding a lot of Bruce Willis's personality and attitude to the character. While Willis must bring immeasurable amounts of angst and pain to a once cocksure hitman. The two have great chemistry when on screen together, and are even better when forced to problem solve by themselves. They have their own individual motivations separate of one another, and both perceive themselves to be righteous in their purpose and mission. It's yet another star making turn for Gordon-Levitt following "The Dark Knight Rises" and again proves him to be a more than credible action performer.

There is one major flaw to "Looper" though and it lies entirely with the second half of the film. This obviously enters into significant spoiler territory so I'll be vague. The back end of "Looper" will feel incredibly familiar to even the most basic of sci-fi fans. Meaning that an all time classic science fiction film features most of the exact same plot dynamics or situations done here. They are altered to fit "Looper" and its ideas yes, but it only takes one sequence to harken back to another film and see the direction we're going. This is done on multiple levels, so much so that it almost feels like an accidental ripoff. Granted it's still greaty filmmaking, and they're lifting from a great film, but the road has also already been traveled.

Even with the back half's issues, "Looper" is still an excellent film. One that shouldn't be missed by any film lover or action fan. See it, and see it soon so as not to be spoiled.