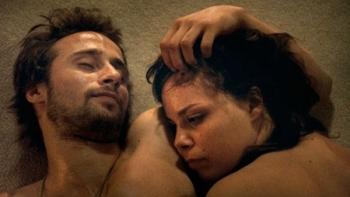 A quiet Belgian horror film, “Linkeroever”, which translates to mean “Left Bank,” is the story of Marie, a professional runner who has just qualified for the European Championships. Played by the cute Eline Kuppens, Marie meets Bobby (Matthias Schoenaerts), the head of the archery guild. Bobby lives on the elusive left bank of Antwerp in a creepy apartment building which has a dark history going all the way back to the Medieval period.

Fleeing her overprotective mother, Marie moves in with Bobby. Things are ideal at first, as they learn to share a fancy apartment and have hot floor sex, but events take an immediate turn for the uncomfortable when Marie comes down with an unexplainable illness that her doctor attributes to her rigorous running schedule and she can't compete in the European Championships as planned.

There are also other symptoms to her illness that cannot be explained, such as the onset of her surreal dreams that border on nightmares. There also turns out to be a dark side to Bobby, as his temper at times gets out of hand. The neighbors in the building are aloof and unfriendly and Marie's condition becomes progressively worse as she begins to discover that things in the Left Bank are beyond normal.

"Linkeroever" plays as a dramatic horror film. Events that in any other genre would add up to perfectly banal relationship tensions and melodrama, instead lead to surprising and sometimes supernatural conclusions. Marie reacts to strange noises in the apartment building and creepy interactions with neighbors in a level headed manner. She is shaken, but Eline Kuppens doesn't overplay the fear and unease that Marie begins to feel as she uncovers the mystery of the Left Bank.

This film contains none of the typical horror film tropes. Pieter Van Hees rarely uses music or jump scares and because of this, there were times when I forgot I was watching a horror film. While there are elements of horror, the film focuses more of the psychological stress of undergoing changes, like how an athlete feels when they can no longer compete. For this, “Linkeroever” feels like a more subdued Richard Matheson story, and one that has definitely has taken inspiration from “Rosemary's Baby.”

“Linkeroever” plays horror in a more realistic, dramatic circumstance. The longer I watched the film, the more I began to believe in the mythos of “Linkeroever”, because many of the events in the building are familiar to everyday apartment living. Because of this, I found the ending to be pleasantly creepy. It definitely gave an entirely new spin to the 'final girl' theory. The ending in particular is so interesting that I wished that some of the other elements were stronger throughout the film. Then again, it would have shifted the tone to a more typical horror film feel, which would have destroyed the sleepy pacing that “Linkeroever” uses successfully to build tension. Either way, I wouldn't pass this film up if you are a fan of character-driven horror films and don't mind something that's a bit of a "slow burn".

“Linkeroever” is stunningly filmed in Duerne, Belgium and has some gorgeous shots of the misty countryside. Its aesthetic is due entirely to cinematographer Nicolas Karakatsanis whose use of color and lighting are engrossing enough to balance out the slow pacing. The gore hound in me was itching for a maiming at points so, depending on what type of person you are, this may be an afternoon background film instead of one to sit down with. The pacing is slow throughout and while creepy things do happen, it may not be ground breaking enough to hold some viewer's attentions.

I viewed this back to back with another Belgian film with horror elements called “Small Gods." Both films capture a certain hopelessness when faced with life changes and what happens when people are pushed passed their boundaries. Belgian horror is for the most part a nonexistent genre, but these two films together excite me at the possibilities.