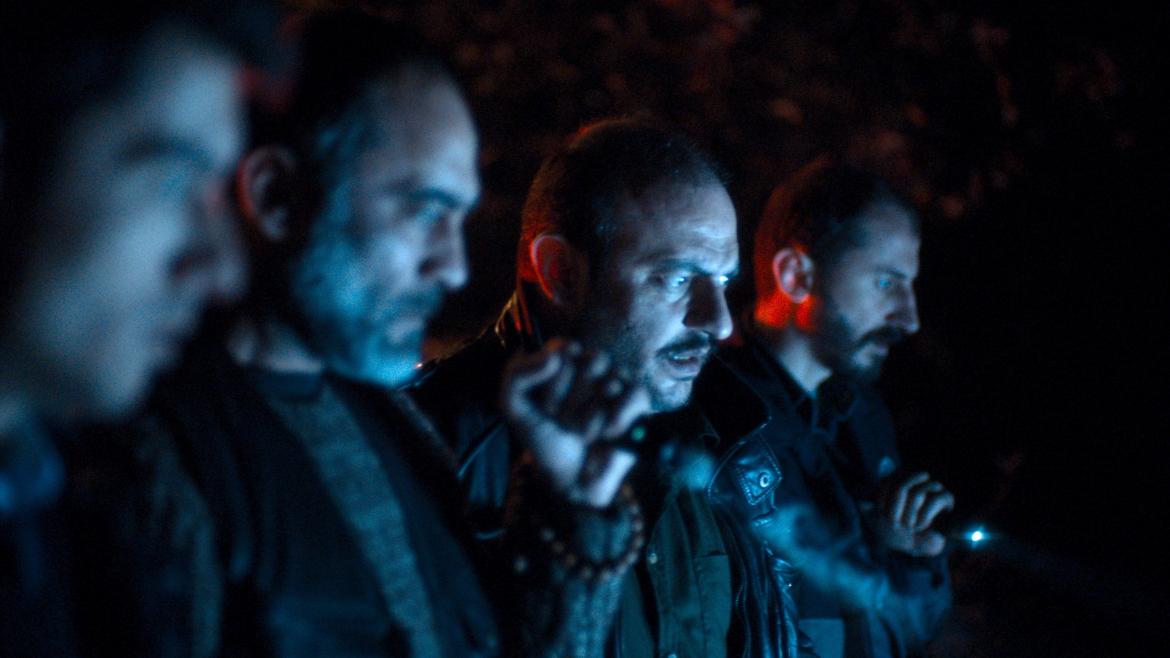 Vicious, labyrinthine, and saturated in blood and guts, Baskin is a Turkish film that made some noise in the festivals late last year. It’s not hard to understand why. This is the type of film that viewed with the right sort of crowd could ratchet up the emotion around the impressive visuals and lessens the impact of the lack of structure.

Baskin beings with a shot of a boy cowering in his bed to the sound of someone moaning in the next room in some very interesting and surprisingly artistic framing and deft camerawork that can be seen peppered throughout this film. We move to a squad of five policeman gathered around a table telling bawdy jokes and eating meat and weighing the pros and cons of prostitution and anal penetration. One could chalk this up to a Tarantino homage, perhaps because of the cultural differences or just the comedic timing not translating through subtitles, it all falls flat.  Following that, one of the policeman picks a fight with a waiter doing little to cast these men in a favorable light.

All of this doesn’t seem to matter much as we are quickly on our way into a van and called to the scene of a crime, crashing into a lack. There, they find themselves in the midst of a black mass and are murdered one by one in escalating scenes of realistic torture and scenes of grisly mayhem. When Baskin enters the final act, first time director Can Evrenol is able to dive into the gruesome visuals which are clearly his passion and easily make up the most interesting aspect of Baskin. This is a film with nearly all the right pieces that somehow just don’t come together.

“Hell is not a place you go. You carry Hell with you at all times.” The Father (played by Mehmet Cerrahoglu who looks shockingly like a tiny Michael Berrymen). This statement seems to be the thesis of the film, but the lines drawn are shaky and ill formed at best leaving a somewhat confusing heap in its place. As a result even some of the beats come across more as a series of staged haunted house visuals than an immersive film making experience. Обзор популярного казино Азино777 на сайте https://slotyinfo.com/casino-azino777/ .

Yet when Baskin comes to its final scenes things begin to click into place, it nearly overcomes the shambling mess of a plot.