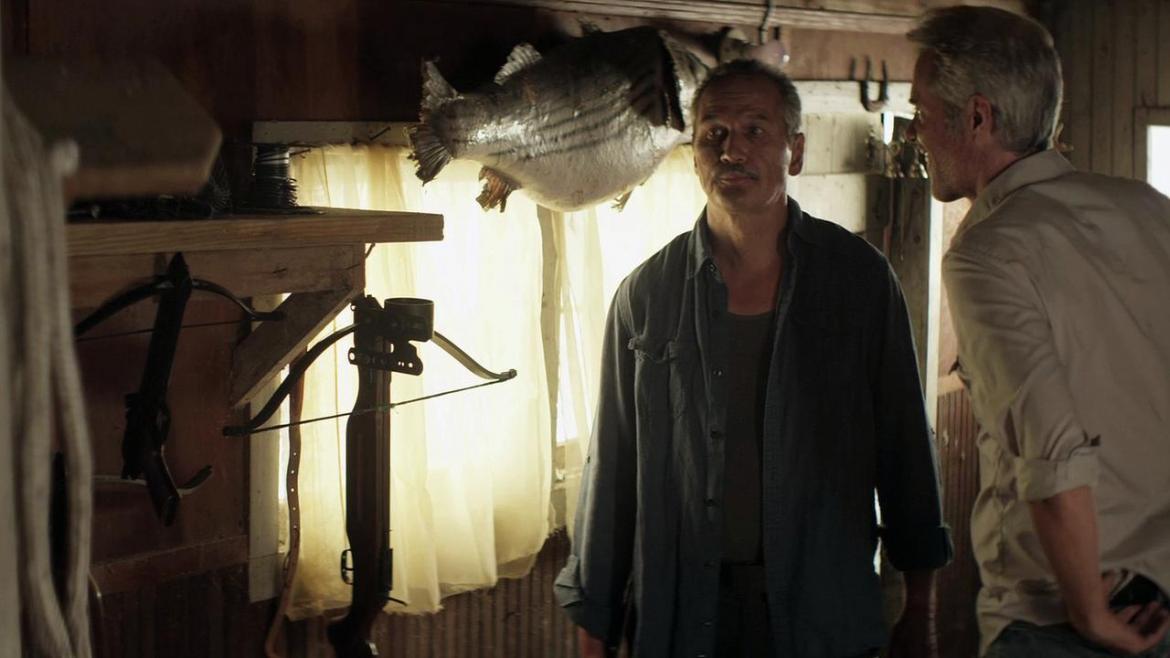 Fans of Stake Land are in for a treat. Nick Damici is back, and this time he’s taking on werewolves. Instead of the rogue vampire hunter, Mister, he plays Ambrose, a blind Vietnam veteran who has just moved into a secluded retirement community. His son, played by fan favorite Ethan Embry, drops him off at his new home and it is quickly obvious that the father-son dynamic between the two is deeply strained. On that first night, Ambrose and his dog are attacked by a huge monster that demolishes his new home and leaves his neighbor dead. When Ambrose tries to explain to doctors and police that he is sure that whatever attacked him was a dog of some kind, he discovers that strange things have been happening in this community for a long time, and takes it upon himself to get to the bottom of it.

There is no shortage of kooky characters at Crescent Bay—from the welcoming party that comes to his home with casserole dishes with the poorly hidden motive of checking up on him, to a man living in an iron lung, and the kindly priest at the local church, played by Tom Noonan. In just about every interaction, Ambrose is pretty abrasive and doesn’t seem all too concerned with making any friends, and after the police brush off the concerns about missing dogs and animal attacks within the community, Ambrose is more than happy to take care of this problem on his own.

Late Phases was directed by Adrián García Bogliano, who was a contributor to The ABC’s of Death (he is responsible for the “B is for Bigfoot segment) and directed Here Comes the Devil. The movie gets off to a good start, giving a fair amount of plot exposition without dragging on, and throws it’s first big action sequence in fairly early on. The attack on that first night is expertly done. Unlike many creature features of late, this movie is not afraid to show you the monster. Some great shadows and silhouette creep in the back of frame, and just when the audience starts to think that you may not get much in the way of the visuals, the monster jumps into frame. This is a werewolf done with good old practical effects, and done well. The actors all do a good job and the film well shot; the problems come after this great sequence.

Coming in at just over 90 minutes, Late Phases definitely struggles more than a little with its pacing. Once Ambrose is deposited back at home by his son and daughter-in-law, the movie drags quite a bit. He jumps to the conclusion of werewolf surprisingly quickly, and then, is the nature of werewolves, has to wait a month before he can really do much of anything. The entire middle third of the film is made up of his month of preparation for the next full moon and doesn’t include much in the way of genuine action of plot building. This is strange considering that, in comparison, the third act feels incredibly rushed. We discover who the werewolf is, in a reveal which was handled pretty darn flawlessly apart from its location within the story, and rush headfirst into the night of the full moon. I found myself wishing consistently throughout the climax of the film that this segment could have been stretched out and some of the training montages removed. When the film seeks to reconcile the relationship between Ambrose and Will (Embry) it also seems to happen in fast forward and doesn't carry the emotional weight that it could have.

The first and third acts of this movie are definitely fun to watch, particularly the one transformation scene we get towards the end, but you have to be willing to put up with a middle segment that quickly feels tedious. If it's the full moon and you're itching for a wolfy movie to watch you could definitely do worse.