Land of the Minotaur (Movie Review) 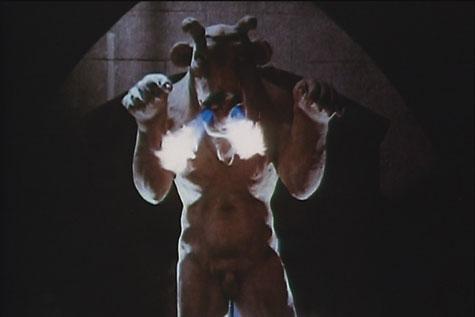 An arid Greek valley with an ancient stone fortification crowning its highest plateau gapes like a toothy maw to welcome three young explorers, Ian, Beth and Tom. They have landed here by virtue of finding a small, golden bovine talisman and ignoring the quiet wisdom of an aging priest (Donald Pleasence) who has already seen two young people go missing while chasing their fancies in “The Land of the Minotaur”. Amateur archaeology is a dangerous business on the Greek isle of Minos and the trio runs into trouble when Tom and Ian unearth a secret chamber housing a talking Minotaur statue and the corpses of the missing couple. Meanwhile,Beth returns to their campsite from a shopping trip in town to find the two men and all the camping gear have gone missing. She enlists the help of an impossibly creepy local Baron (Peter Cushing) in the search for her friends and disappears shortly there after.

The benevolent Mr. Pleasence feels somewhat responsible and calls in a swinging dick/private dick from New York named Milo Kaye. Kaye is a salty haired former resident of Minos who amazingly possesses very few instincts that would make the expensive flight from NYC seem worth the trouble. There is also a woman named Laurie Gordon who seems to be here to perform the very narrow function of being marauded while wearing tight sweaters. Despite the limitations of this three way partnership the group does manage to stir the pot enough to inspire the Baron and his cult of evil townsfolk to set them up as sacrifice fodder for the Minotaur god. By tale’s end Milo proves to be slowest semi-fit adult in screen history, Pleasence shows that he can translate his Dr. Loomis character to any culture without modification and Cushing sifts a few pearly moments of gravity from a torrent of pigshit while leading a cult that feels about as threatening as a small square of baklava.

The best thing about “Land of the Minotaur” is that it features no fewer than 3 principle players from the greatest Greek exploitation movie of all time (maybe the greatest exploitation movie period) “Island of Death" aka “Island of Perversion” aka “ Devils in Mykonos” aka go out and fucking see it if you haven’t. Devils’ has liberal doses of high depravity including incest, rape, goat humping, a lusty post-cougar taking a urine bath, Cessna lynching, paint drowning, and much, much more. ‘Minotaur has none of these things. The protagonist couple from “Devils in Mykonos” makes an appearance in ‘Minotaur as does the lusty old pee-soaked cougar. Sadly, rather than these actors dabbling in debauchery they are simply being set up for a series of tepid kills and uninspiring partial nude scenes. To be fair there is probably a censor’s editing bay somewhere with lots of little boobs and bloody cutaways littering the floor. But even provided a pristine cut, overfull with the lost nudity and gore this film still might not be worth your time.

“Land of the Minotaur” suffers from being too much like other films with out being enough like them in the right ways. From the first strains of music (By the way, the score is the best part of the film) right into the supposed insanity of the Minotaur ceremony the feel of a distant, much lesser Greek cousin to the ‘Blind Dead' films prevails. But where the 'Blind Dead' movies can provide atmosphere, campy charm and at times really fine cinematography, ‘Minotaur just offers bad pacing, a simplistic plot and a lot of telegraphed punches.

At points the film was so dull that I labored to attach some manner of contextual significance to the story of a remote village taken under Satan’s spell only to be freed from the curse by a reclusive priest and an American detective…Yeah, I got nothing. This movie is underwhelming enough to justify it vanishing into obscurity. Part of me has some small curiosity about what was trimmed but as I said before I suspect the best that restoration could provide is a little more Technicolor blood and half a dozen bare nipples. That’s not exactly a grand loss to cinematic tradition. Do me a favor, go watch “Devils in Mykonos”, just so you can say you’ve seen it. After that take a look at the 'Blind Dead' films. Once you have seen all of those if you are still jonesing for something a little more Greek with a cultish feel, watch “Dogtooth”.