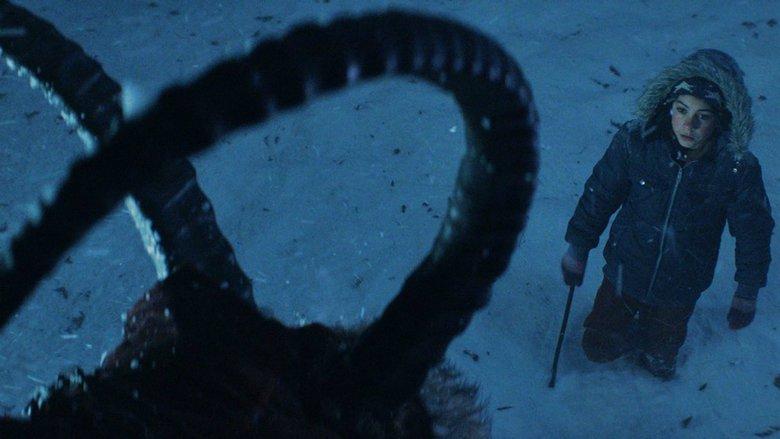 With the winter holiday's quickly approaching, it's only inevitable to find films with holiday cheer ready to invade theaters. There is a great tradition in the horror genre of subverting the iconic aspects of the Christmas experience. That's exactly what the film Krampus does with its anti-St. Nicholas plot. What gives the film an edge over other holiday horror romps is that it balances horror and humor to a degree that neither panders to horror fans or ignores them completely. While it's important to address social constructs, especially the archaic variety, there's a magic around the winter that should not be extinguished. Thankfully, Krampus has its message delivered in a package that feels like Gremlins and Nightmare on Elm Street cozied up by a fire to tell a holiday tale.

Max (Emjay Anthony) may be one of the only people in his family to truly appreciate Christmas, but his joy for the holiday stems from his grandma Omi (Krista Stadler). While his parents, Tom (Adam Scott) and Sarah (Toni Collette), are busy with their business calls and preparing for the extended family to invade the home, Max is grasping for the holiday's of old. Rituals such as watching the Charlie Brown Christmas special while wrapping presents and soaking up up the love that family should share for one another. When Sarah's sister Linda (Allison Tolman) and brother-in-law Howard (David Koechner) arrive with their band of misfit children, including Sarah's estranged gimlet loving Aunt Dorothy (Conchata Ferrell), the joy of the holiday begins to dwindle. Max's cousins steal his letter to Santa Claus and read it before the entire family, exposing Max's childlike wonder and need to believe in something greater than what the Christmas holiday has become. In his anger, Max rips up his letter and wishes for a holiday free of his family and their disdain for magical folklore. His wish is granted when a sudden storm hits the suburban town, shutting down all power and access to the outside world. WIthin this storm is something much more sinister than natural weather; the anti-Santa known as Krampus. With his minions of demented elves and Frankenstinian ginger bread cookies to get the dirty work under way, Krampus begins to fulfill Max's wish by picking off the family one by one.

It's difficult to quantify how referential this movie is scene by scene to horror and Christmas films of the past, however the overall feeling that a viewer gets from Krampus is that it knows what it's doing. With an opening scene that shows various holiday shoppers fighting tooth and nail to get the gifts they need, it sets up that the theme of the film is to address what the holiday's have become. The plot moves away from this and into the heart of how families interact when forced to gather together for a ritual such as Christmas. It's a seamless transition from one taboo to the next that effectively creates a world that is relatable. The extended family that feels far removed from normality, the lack of attention to what the kids need, and the unspoken tension pulsating through the family home all help support this subversion of the holiday. Once the horror kicks into gear, the world feels established and ready for punishment which is a testament to how well it's all set up. Max is the viewers eyes and ears into the holiday cheer and thankfully he is a likable presence as he brings out the childlike wonder that typically surrounds the holiday. In this way, he also becomes somewhat of a homage to Billy from Gremlins as the rules that are introduced are put into his hands.

Once the Krampus minions begin to appear, it's impossible for the viewer to not feel Gremlins pulsating through each scene. The onslaught of whacky little monsters and creatures attacking the characters rides the line of horror and comedy well, allowing for a fun but somewhat suspenseful ride. One monster in particuar, the snake-like Jack-in-the-Box, is terrifying and inventive which raises the flag that Krampus is truly a film to cherish. The relationships between the family members varies from strong to weak, but the inclusion of Omi as their folklore guide adds a nice touch. As she explains the tale of Krampus, the film reverts to an animated tale which not only creates a storybook feeling, but also allows for the creativity to flow. Her presence is strong and ties the emotional core of the film together and ultimately into Max in the end.

The film is great with pacing as the introduction of Krampus and his minions is gradually given to the viewer without boring them or throwing it all out at once. There is a disconnect between focusing around Max and trying to establish the other characters more, however it doesn't ruin the overall experience. This is where the line between horror and comedy is much more defined. Although it pulls from predecessors like Gremlins, the film decides to inject comedy but also rely on horror and suspense. The tale of Krampus and how to essentialy defeat him felt tied to A Nightmare on Elm Street in the imaginative sense. While Kreuger enacted his revenge, so does Krampus, but with the aid of more comedic minions to add some brevity and joy to the horror experience.

The amazing aspect to Krampus is that it fits nicely into a specific collection for horror fans. The films that shaped horror fans as children, such as Gremlins and Child's Play, are present within this film which creates a new generation of genre lovers. The line between comedy plays nicely, allowing children and adults to enjoy it, but the horror is enough to give younger viewers a taste of what the genre has to offer. This will easily fit into the collection of films to show to kids interested in the genre, while additionally offering a warm hug to the older viewers that watched a Krampus predecessor when they were younger.