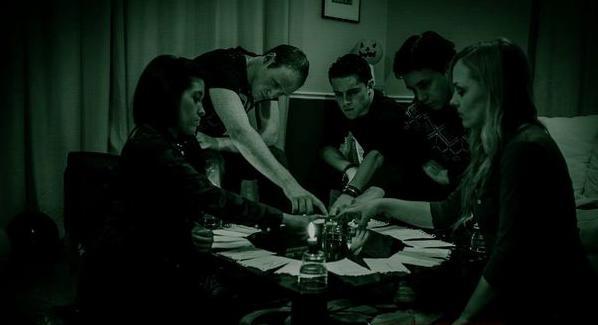 Every now again you discover a movie experience where every second that ticks away causes you serious physical harm. Ok, so not literally, but you get the idea. Ireland has delivered us some quality horror in the years passed it seemed only a matter of time they inflict unfathomable awfulness to us as well- such is the game when you spin that Netflix wheel and subject yourself to whatever it lands on. Invoked, the film in question, is so unbelievably bad the only thing that will keep you up at night is the time you lost watching it.

What happens when you combine a handful of obnoxious Irish college kids, drugs, booze and a homemade Ouija board (circle in this case) made of letters scribbled on torn spiral notebook pages? The answer should be fairly simple at this point, but you get a poorly made mish-mash of fount-footage tropes that countless other poorly conceived ripoffs managed to do better than this.

There is one thing that's truly terrifying about Invoked- that it contributes to someone's screenwriting credits on IMDb. It would be genuinely shocking to learn that there was a script for this let alone that someone even bothered. It'd be easier to stomach in believing Humberto Rosa (who has the Story By credit) simply took Aaron Gibson's script, urinated on it and just told the actors to (A) improvise everything, (B) screech uncontrollably, and (C) repeat everything at least 25 times. The script for the entire last act probably looked a little something like this with minor variations:

The drinking game for this movie could simply be, take a drink every time a character says the word 'messin' and you might end up in the hospital getting your stomach pumped before it's all said and. Outside of one cool- but terribly fleshed out- turn Invoked is woefully short on anything resembling entertainment. Not once does it venture into the "so bad it's good" territory and takes itself entirely too seriously. Obnoxious, one dimensional characters shriek, run around in dark out of focus frames and run wildly from undefined spooks and cheap jump scares which ultimately fail because of an amateurish sound design.

Unfocused, shoddily edited and grating to the ears- Invoked is a perfect example of just how terrible found-footage can be. Even liquored up it's difficult to imagine this dumpster fire passing for a desperate late night cinematic booty call.