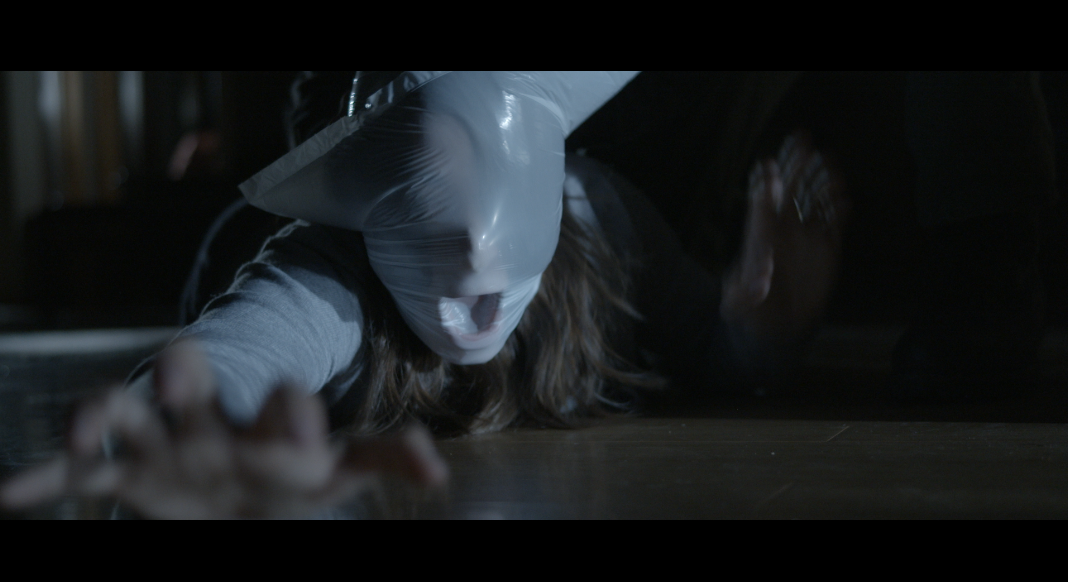 If you’re excited by the idea of lots of scenes of a woman sleeping in an apartment while a hooded figure lurks in her closet, drinks milk, and goes through her photos, then do I have a recommendation for you.

Elizabeth (Scottish actress Louise Linton, who also appeared in the Cabin Fever remake this year), is a young cellist excited over the prospect of her opportunity to continue her profession in England who decides to spend a weekend alone in her apartment. Though her life is going well professionally, her personal life is a different story. Her instructor, Vincent (Moby. Yep, that Moby) sexually harasses her - in an early scene, he creepily rubs her shoulders while she’s practicing. She and her boyfriend aren’t speaking to one another. And the one seemingly nice guy in her life is a man she occasionally sees at the laundromat and coffee shop. To top everything off, someone in a black hoodie has decided to spend the weekend with Elizabeth without letting her in on the plan.

Intruder commits the worst sin a horror/thriller film can commit: it’s boring. There’s just not much that happens during the entire runtime. Writer/director Travis Zariwny makes good use of his $1,000,000 budget from an aesthetic standpoint. Cinematography is competent and everything looks fine. Acting is better than is to be expected from most indies (though it’s never clear whether or not Elizabeth is supposed to be British or not. Linton has an accent that comes and goes, but her brother sounds like an average American). The major problem with the entire production is that very little action occurs. The first couple times we see the intruder is a little unnerving as he does things like lurk next to her towel rack as she showers. But as the film goes on, he becomes almost a part of the furniture or wallpaper as he appears in the background while she watches TV or thumbs through her music collection while she sleeps. Zariwny presumably thinks these scenes are suspenseful, but they’re not. There are also several red herrings to steer the viewer in different directions as far as guessing who the killer is, but the reveal is neither shocking nor thrilling. Perhaps the best section of the entire movie is a post-credit scene but even it proves to be lackluster.

Intruder is currently streaming on Netflix. Though not great, it’s superior to much of the dreck that passes for horror on streaming services in that it’s a real movie with decent acting and camerawork. But it’s unlikely to frighten or entertain many people who will watch it. Director Zariwny shows some promise and has the potential to create a compelling and frightening film if he can improve his editing skills and focus more on tension. Unfortunately, Intruder shows that that improvement may take a while.