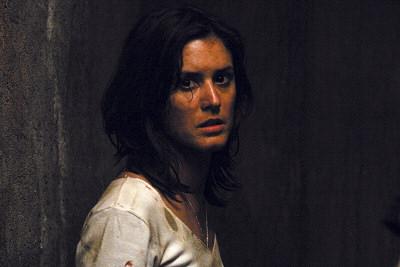 "Ils" (aka “Them” for those you who struggled through French I) is a minimalist, almost archetypal slasher film. It would be hard to strip this film down any further and still have a feature-length narrative film. In its current bare-bones state the film clocks in at under 80 minutes, which is a godsend for long-film haters in these days when movies adaptations based on cartoons or amusement park rides routinely stretch out to over two hours.

The nothing-newness of "Ils" kicks off with the opening scene. A mother and daughter have a car accident on a rainy night. The mother gets out of the car to check the damage... and doesn't come back. The girl hears a strange sound and realizes that someone or something is out there. Cue the jump scare and we move from the effective, if only tangentially-related prologue to the main story.

Lucas and Clémentine are a happy, loving French couple who have recently moved to Romania. Their new life is dandy until one night they are awakened by a bump in the night. That's the whole setup of the film, and really, what else do you need? It's a universal feeling that everyone has experienced and can relate to. From there it goes pretty much where you would expect (for a horror movie at least). Someone is in the house and we don't know who it is or what they want.

The “them” of the title is the essential mystery of the film. For most of the movie all we see of “them” is the beam of a flashlight or a shoe or a hand. The film gives a few clues that savvy viewers might pick up on but when the big reveal comes it's surprisingly effective, if a bit too late in the film. The twist opens up a lot of interesting ethical questions that are wasted by saving it for the end of the film. A better film would have had the reveal earlier and milked it for all its inherent dramatic tension.

One interesting trick the film follows is that it almost uses a first person narrative. We follow the couple when they are together, but when they are separated the camera follows one or the other and for the most part we don't really know what's happened to the other character. This adds an extra level of suspense and realism that you don't get when a film cuts back and forth between characters. It's a clever way to reconcile the immediacy of found footage films like "Cloverfield" or "[REC]" without having to deal with the unavoidable logical problem of “Why don't they drop the camera and run?”

There's nothing you haven't seen before in “Ils” (well, maybe one thing, but in the interest of being spoiler-free I'm not telling about that) but it boils the slasher film down to its essence and does it well. In fact, the whole film is pretty much what would be the climactic final chase scene of a typical slasher film. The twist at the end isn't just a cheap gimmick, but actually adds context and realism to the movie, in addition to making it more horrific. While it's far from a ground-breaking film, it is very watchable and short enough to not overstay its welcome.