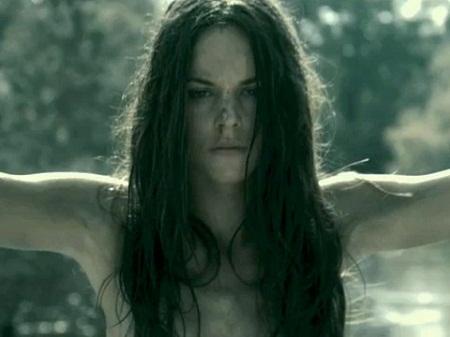 Here we go, the remake of arguably the most infamous film of the 1970’s. Meir Zarchi’s original “I Spit on Your Grave” has been held up as a manifesto on male fear of and for women in a ‘man’s world’. It has also been excoriated as an irredeemable piece of filth by those who see it simply as a salacious exploitation picture. In my small opinion the original film probably deserves all of the criticism it receives and some benefit of the doubt for having more going on than maybe evident on one pass. It seems feasible that Zarchi intended to try and weave a feminist bent within the fabric of an incendiary exploitation movie. It is also evident that he was a little out of his depth in doing so, at least as a writer. By focusing so much time on the rape and revenge and giving little weight to character, emotional immediacy and the complexities of the individuals involved he opened himself up to charges of tasteless hackery. So what should we hope for in a remake of a thinly personified, pitiless rape revenge tale? Maybe that the producers of the 2010 version would have thoroughly considered the original film and sought to add details to the story to make a more challenging portrait of the people and events.

In terms of plot this version is a pretty faithful update of the original story. Jennifer Hills is a writer who has rented a cabin in the backwoods to give her a clean, unencumbered environment in which to finish her new book. Upon arriving in the town near the cabin she has a brief encounter with a group of dim-witted rapists-in-waiting who work at the local gas station. Jennifer laughs it off but it is clear that she has wounded the pride of Johnny, the group’s leader. She finds her cabin, settles in, but soon finds that the plumbing is seriously gummed up. She makes a service call, promptly drops her cell in the toilet, and in short order a developmentally disabled young man named Matthew arrives to fix her commode.

Unbeknownst to Jennifer, Matthew is friendly with the gas station gang. He meets them for some fishing after finishing the toilet repair. Angling and beers mix poorly with Johnny’s bruised ego and later that evening the whole gang is making an unwelcome call at Jennifer’s front door. They sexually menace the young scribe but before they can rape her she escapes into the woods and happens upon the local sheriff who is hunting with a friend. The sheriff turns out to be friendly with the younger thugs and he earns Jennifer’s trust just long enough to ensure that he and his boys can finish what they started.

Jennifer is brutally gang raped by everyone in the pack and then plunges herself into a swollen river to escape a bullet. Of course she survives the ordeal and then lies in wait in the Pine Barrens. Slowly Jennifer baits her trap, ramps up the psychological torment on her attackers and awaits the opportune moment to exact her final vengeance.

Why? Why remake a flashpoint film and have virtually nothing new to say about, or add to the original concept? Sarah Butler handles what she is given well enough, but the character of Jennifer Hills seems some how less savvy and certainly less fleshed out than the one Camille Keaton portrayed in the original film. Her transformation from naïve, non-observant victim to cunning, vengeful wild woman of the woods is done entirely off-screen. This gives the audience no empathic outlet to help counter balance their visceral response to the events. It also makes it seem for all the world like the premise of the film is something along the lines of “No bad deed goes unpunished”, “Hell hath no fury…”, “Payback’s a bitch” or something equally trite. This notion is given further credence when Hills starts spouting Arnie-esque one-liners during the revenge sequences. Is this really all the payoff and food for thought that we get from a film with a narrative built around a protracted rape sequence?

Contrived, clichéd, shallow, this remake is so maladroit that it isn’t really all that disturbing. Make no mistake it is a troubling concept and unpleasant to watch but at no point do the filmmakers go beyond banal depictions to try to memorably contextualize the loss and trauma of the events. Yes, they do bring the sheriff’s family into the fray but it is done less to present us with an outwardly relatable everyman harboring a terrifying character schism than to cheaply illustrate that he is a truly evil bastard. The former choice would have taken some courage on the part of the screenwriters and producers, something that is clearly in short supply here. This filmmaking team didn’t even have the guts to give Jennifer Hills the instincts and observational skills becoming a writer; one can only presume this is because those qualities might have diminished her victim status in the eyes of the simple-minded folk they were targeting. It’s an insult to the viewer and it makes the film even more offensive than it was destined to be just on subject matter alone.

The good things at work here: very nice, bleak cinematography, inventive and arresting practical make-up FX and good value on the production design. None of that makes it worth the slog, nor does it justify the time and money they spent doing a faithful remake of film that had as it’s greatest attribute the relevance of being set and made during an era of exaggerated gender tensions , namely the 1970’s and the ERA movement. Director Steven R. Monroe and crew unimaginatively took Zarchi’s story out of that era and created a stalk and rape set-up with a tepid stalk and slash / torture-porny conclusion. If you want a thoughtful, female driven revenge flick with guts and soul go watch “Hard Candy” ,“Confessions”(“Kokuhaku”), or even “Extremities” . If on the other hand you just want to ask yourself “why?” over and again spend 110 minutes with this utterly pointless and unpleasant film.

We Are the Flesh