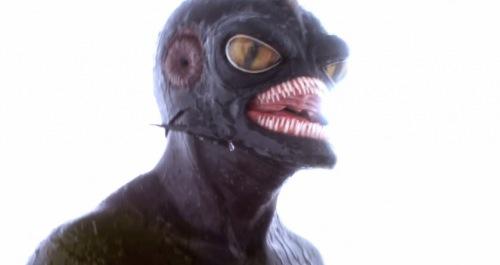 One of the most memorable moments in horror for me this year was the running joke about “mermen” in “Cabin in the Woods,” so I found the idea of an entire movie about mermen pretty amusing. Unfortunately that tiny moment of amusement was the most enjoyable part of watching "Hypothermia".

This movie tells the story of Ray Pelletier (Michael Rooker) and his family, who are ice-fishing on their annual vacation. While out on the ice they are soon joined by an overly obnoxious man and his son, who bring a ridiculous amount of expensive fishing equipment with them, and proceed to annoy the hell out of the Pelletier family. The two families notice that there is something enormous swimming beneath the ice and then join forces to try to catch it. Soon they realize that they are up against something much more dangerous than a fish, and eventually they find that they are trapped out on the ice as the mermen begin to kill them one at a time.

This movie is a failure on a lot of levels. The characters are set up to have this arrogant out-of-towners vs. the old wizened locals dynamic, but once the mermen start to attack, the Pelletier family is so annoying with incessant suggestions and unwanted advice, that I really just wanted them to die so they would all stop whining so much.

In addition, "Hypothermia" never really decides if it wants to be comical or not. The out of town family is so ridiculously over-the-top annoying that you would expect the movie to be a full-fledged horror-comedy, but there is no commitment to anything genuinely humorous, so ultimately the film ends up being neither funny or scary in any way whatsoever.

Whenever the mermen appear on screen there is a lot of shaky-cam and blurry-vision to try to hide how bad the rubber mermen suits look. The moments when the mermen are shown clearly they look so silly and awkward that it is laughably bad. The makeup effects were actually pretty good so I think that a few more on-screen kills would have done this movie a world of good. Usually I’d expect a low-budget monster movie like this to have a bunch of gory kills and Hypothermia only has one. All of the other deaths happen off-screen.

Also, did I mention Michael Rooker is in this movie? That guy has a lot of talent, and I really think he’s great in things like “Slither,” and “The Walking Dead,” but in "Hypothermia" he just doesn’t have anything interesting to do at all. The story is supposed to revolve around him, but for nearly the entire movie his character is mostly just a passive observer, and he doesn’t direct the action for more than a few moments.

On top of all that, this movie has no plot and no depth. In fact it’s so devoid of everything good that you would expect from a monster movie that it really makes it obvious that the people who make SyFy Originals actually know what they’re doing. Think about this: “Jersey Shore Shark Attack” is way better than this movie.

About the only thing this movie does right is that it is only 73 minutes long. If they’d have added more filler to get it up to a 90 minute run-time it would have probably been unwatchable. I really would love to see a good movie about killer mermen, or fish-people, or whatever... but "Hypothermia" just isn’t it.