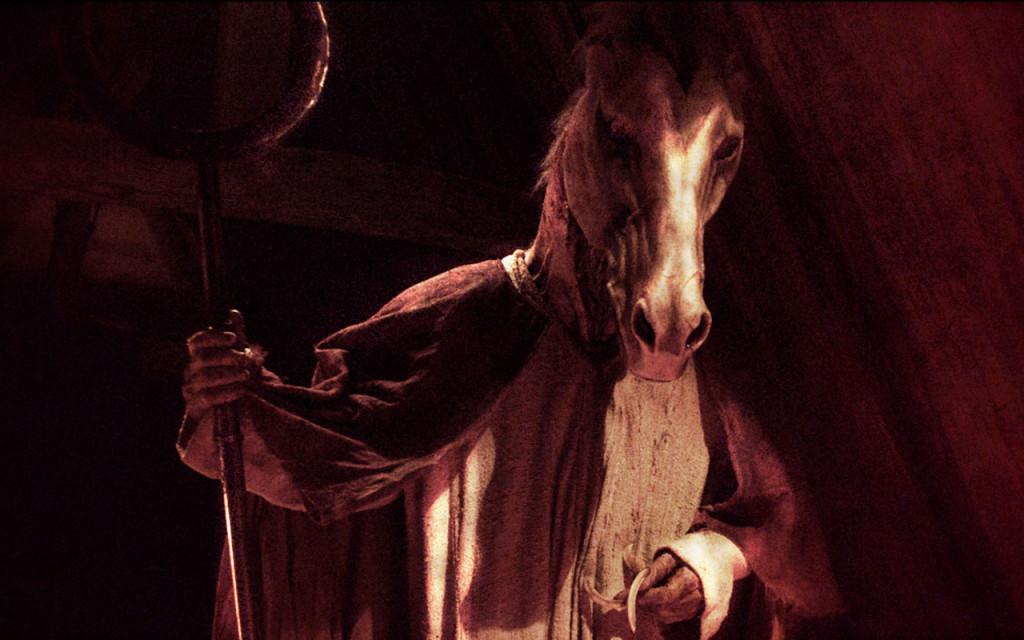 From the opening scene of Romain Basset's Horsehead its tough not to feel hypnotized. If not hypnotized, than at the very least in a dreamlike trance in which you awake unable to articulate what it was you've just experienced. Part gothic horror film and part dubstep music video Basset masks a plodding story with stellar and often horrific dreamscapes.

Jessica (Lilly-Fleur Pointeaux) is a young woman who has experienced bizarre nightmares all her life featuring a horse headed monster. Her experiences lead her to study the psychology of dreams and the possibility of "lucid dreaming." She gets a call requesting her presence back at her family's estate following the death of her grandmother. Once home Jessica's nightmares intensify and she falls ill causing her to spend most of her stay in bed giving her plenty of time to experiment with lucid dreaming in order to find meaning behind her nightmares.

Jessica's beastly tormenter has the appearance of death itself- sneaking up slowly and wielding a long scythe-like weapon in the nightmares. It's hands have long razor sharp claws and it spews smoke from its nostrils. For all intents and purposes, the creature effects of Horsehead are nothing short of terrifying. Few things are quite as unsettling as seeing a human body in a robe, but with a horses head with glowing white eyes. The detail and nuances of the apparition seem fit for the cover of a death metal band's next album cover- including the grotesque aspects of the finale. It's just a shame that Basset didn't put the creature to more use throughout.

Like many of horror's most effective icons the less-is-more approach often feeds into the mystique and the fear. Basset manages his horror aspects with a deft skill, but maybe took the less-is-more idea a little too seriously. Since the nightmares load up the majority of the film's 90 minutes and the sequences with the horseheaded monster being the highlight, the gothic feel of the set pieces, while often quite striking become a bit boring. The opening scene makes quite the first impression of the titular protagonist, but its stoic silence and menace is lacking through a lot of the middle chunk. Additionally, Basset's script and story feels a bit disjointed and would have best been suited in short form.

There are flaws aplenty to be found throughout Horsehead, but the skill at which Basset has assembled the visuals and structured the horror make for an experience that's tough to shake off when all is said and done. As a short, Basset's material would have packed a much more potent punch and yet even as the film limps off the stage it still manages to put on a hell of a show.