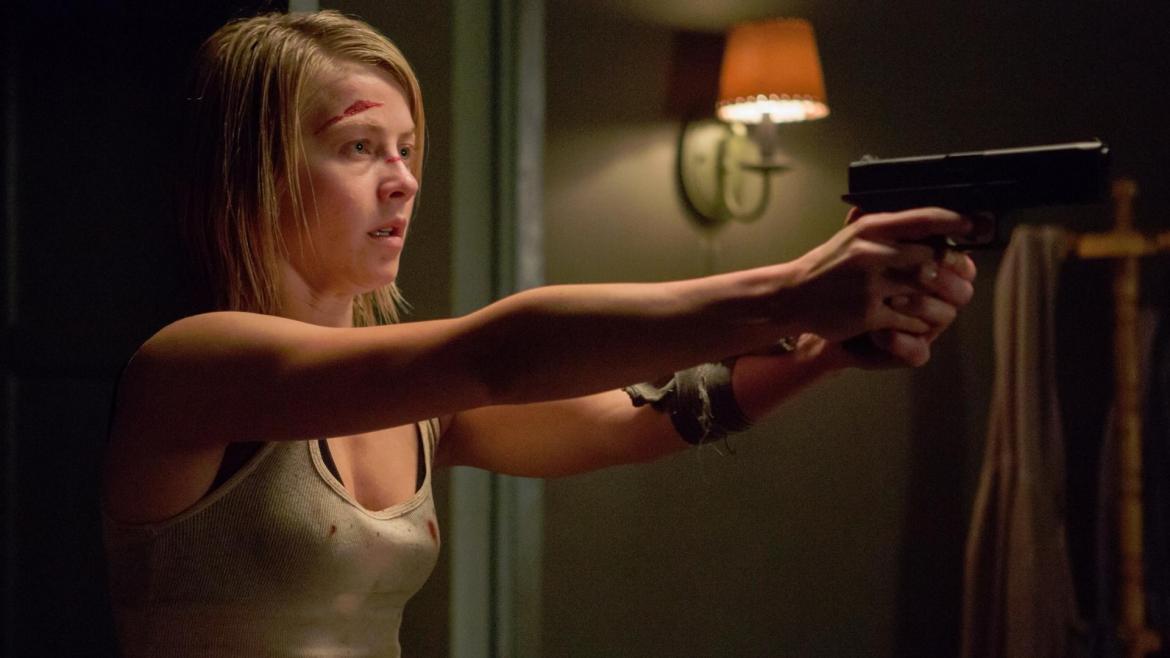 In the by-the-books thriller Curve, Julianne Hough’s character Mallory finds herself in a bit of a 127 Hours situation. She’s trapped at the bottom of a ravine, her leg ensnared in the wreckage of her SUV. She survives for a while, but it becomes clear help isn’t going to make it in time, leaving her with a choice: cut off her leg or die in the SUV. Oh, and there’s a serial killer there, too.

As a movie, Curve is very businesslike. It hits all of the expected beats, moving methodically from Point A to B to C without pausing for pesky distractions like twists or character development. Mallory picks up Christian (Teddy Sears), a hitchhiker with an aversion to shirts. Christian turns out to be a serial killer. She crashes her car in the hopes of getting rid of him, but all she does is get herself trapped. He’s fine and goes off to torment (mostly unseen) others, checking in on her to hinder her escape efforts at, predictably, the last second or to escalate her situation.

Curve never gives us a clue as to who Christian is, which is OK. A little mystery is good for a villain. We simply know he’s a maniac with a passion for uncomfortable sexual exchanges. He also has adopted a pseudo-Jigsaw philosophy about imposing consequences upon people where he deems fit. Sears is pretty bland in the role. His character gives off slight fumes of intimidation, but he seems just as likely to bore Mallory to death with his colorless philosophizing as he does to physically kill her.

The film also never gives us much of a clue into who Mallory is, which isn’t OK. We know she thinks her sister is, shall we say, loose, and we know she doesn’t really want to marry the guy she’s set to marry. Outside of that? She’s a mystery without a definable arc as a character. Survival scenarios are supposed to change characters in some meaningful way, but it’s hard to see how Mallory is changed when we don’t know anything about her in the first place. The one time we do seem to be getting some actual, albeit forced, insight into her, Mallory is revealed to be lying.

Mallory’s lack of depth creates this bizarre state of affairs where Hough is in virtually every scene in the movie, but isn’t asked to do any heavy lifting. It’s incredibly odd to say that about someone who gets as much screen time as she does – much of it solo – but somehow it’s true here. Mallory is sort of there, hanging out in her car upside down. Occasionally she cries or curses, but mostly, she exists.

Curve isn’t a terrible movie, but it is a dull movie with a highly unsatisfying conclusion. It may end up finding mild acceptance amongst movie fans who don’t love horror, but who like an occasional mild thrill or jolt. However, to even casual horror fans, Curve will feel like a car ride down an empty and very straight road. It's the kind of trip that can be made on cruise control while the brain wanders in and out.