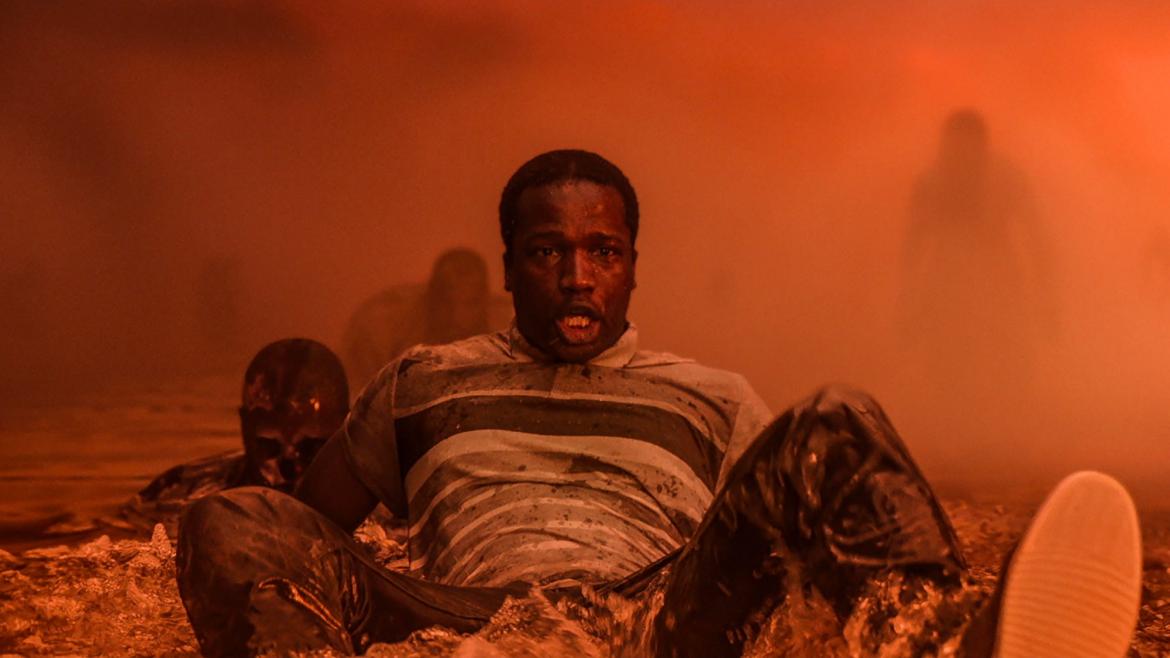 Haunted house stories are rooted in past trauma -- that’s why they call it a haunting after all. From Poltergeist to Ju-on, the ghosts that haunt our characters are manifestations of the trauma of past owners or the current residents. So it is no surprise that a story about the trauma of the refugee experience would seep into the walls of a house.

His House is the debut feature film of writer/director Remi Weekes. It tells the tale of two Sudanese refugees, played exceptionally by Sope Dirisu and Wunmi Mosaku. We begin with some emotionally charged scenes of the two asylum-seekers fleeing their home country and boarding a packed raft. We see a woman drown off the back of the boat and later find out from Rial (Mosaku) and Bol (Dirisu) that this was their daughter. A more rote horror movie would leave things at that -- haunted by the death of their daughter, two grieving parents cannot let go. But Weekes brings something special to the genre, fusing that traditional haunted house narrative with the spiritual underpinnings of the culture that they left behind.

It is both high praise and critique to say that the film is scariest not when it is following genre expectations but in depicting the daily experiences of asylum-seekers trying to integrate in the United Kingdom. Similar to Bad Hair (2020) and Get Out (2018) the film uses the trappings of horror movies (ominous music, stalking camera shots, periods of silence prior to a scare) to illustrate the horror that we do not perceive if you are an audience member that has never lived in diaspora. The film slowly descends from the joy the couple feels as they are told they can stay -- a vision of a bright new life -- to the reality of extreme legal conditions placed on asylum-seekers; having to live on government assistance, a veneer of assistance from charitable organizations like the church, and a profound isolation from one's own culture with pressure to assimilate into the dominant culture of the asylum state.

His House strikes a balance between outright prejudice (kids tell Rial to go back to Africa) and more insipid racism. A neighbour is always eyeing Bol, a store clerk follows Bol in the distance when he enters a clothing store, and every character points out that their house is bigger than theirs in a derisive tone. The ability to create fear where the audience normally sees the mundane is what kept people out of the water or from driving behind log trucks all these years, and this film handles the horror of mundanity with aplomb.

Dirisu and Mosaku are electric on screen. Later finding out that they were given leeway to improvise with long close-ups, really allowed the actors to play off each other as we see the strain on their relationship over time. The contrast of Bol trying to rapidly assimilate into the UK culture with Rial feeling more entrenched in the Dinka cultural norms is perfectly illustrated by the use of a fork and knife as literal and figurative tools. These characters are nuanced in a way that lesser films would not allow; they are shrewd people that have done what they had to do to survive and are living with the guilt of those actions.

Weekes is able to deliver some memorable, frightening moments that are evocative in their own right, while using techniques similar to films like Lights Out (2016). The ability to set the film largely in one location, while including hallucinatory memories back to the painful process of leaving their country, creates striking visual motifs. The supernatural torments pose both physical menace to the couple and the metaphorical threat of being subsumed by their remorse. The language used by the ghosts -- “I can’t breathe” -- hits pretty hard in our current socio-political climate.

His House confronts an issue common to many genre films. If you are trying to depict a reality that is scarier than genre conventions, how do you scare your audience with the fantastic? Weekes instead uses horror elements to explore the psychological turmoil of real life. That is the power of good horror. If you want a film that makes you jump in your seat then I would go to a different haunted house, but if you want a film that occupies space in your mind and leaves you with a sense of dread that won’t move out, then do I have a property to show you.