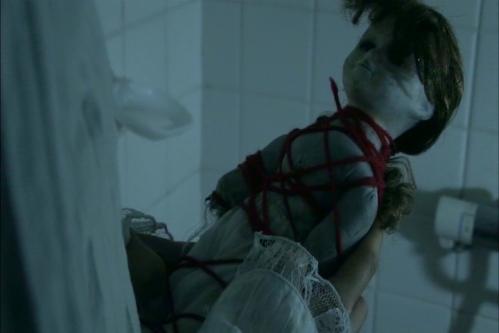 To say that I hated the first “Hide and Go Kill” would be a bit of an understatement. Not only was it a horrible movie, it was easily the worst film I’ve reviewed in my tenure here at BGH. It’s a truly awful, unredeemable film. Unfortunately, it’s also the first of a two part series. Thankfully, the second film in the series is better than the first. However, the difference is marginal and the second film is still a virtually unwatchable mess.

I had a lot of complaints with the first “Hide and Go Kill”. Principle among them was the absolutely horrible way in which the film told it’s story. By using the framing of an anthology film, the original was horrendously repetitive to the point where a solid 90% of the film was nearly identical. Thankfully, this device has been dropped this time around. The sequel focuses on one linear story, seemingly unfolding at the High School featured in the first film (though that’s ambiguous and never fully stated). After a student disappears, her friends investigates her disappearance and learn she’s been researching and playing a game called Hide and Seek Alone.

I swear, those four words are going to make me cringe the rest of my life because of these damn movies.

While focusing on one cohesive story may eliminate most of the redundancies within the film itself, a good portion of this film is a rehash of the first. Despite the fact that the rules of the game were painfully spelled out in the first film (three times if I may add), we still have to go through it again. Despite the fact that we had to sit through no less than three painful online chat scenes in the first film, there’s more in this film (though they’re filmed in a slightly more interesting way). Of course, if I were to somehow purge every memory of the first film from my mind (if you know how to do this, please let me know), this might not have been such a big deal. While the multiple chat scenes would have still been annoying to sit through, the details about how to play the game would have still be required for an unacquainted audience.

However, this is really the only place where this film has improved over the original. The original is quite possibly one of the most derivative and generic films I’ve seen. This time around, more is added, but it’s all just as cliched and generic. We have some more characters added, but they’re all stock tropes. There’s the angsty teenager, the concerned teacher and the wise urban legend expert. All characters we’ve seen a million times before. We’re given more backstory into who this ghost girl is, but again, it’s a story you’ve heard a million times before. “Oh wow, the ghost is a girl who was accidentally killed during a game of hide and go seek? Totally don’t see that one coming!”

Oh wait, no I totally did.

The introduction of all these new character also introduces new problems into the equation. In the original film, since we never spent more than 20 minutes with any given character before switching stories, the lack of character development or personality wasn’t a major issue. However, this film follows the same characters for an hour and forty minutes, and they are just as one dimensional and flat. No one here feels like a real person. There’s no flourish to any performance or anything unique about any of them to distinguish them from each other. As a result, I couldn’t identify with anyone in this film and was never able to fully get into it.

While the second “Hide and Go Kill” is an improvement over the first, it’s still an awful movie. Watching this film is almost like listening to a child’s retelling of a movie they once watched. Everything feels flat and dull and there’s no driving force behind anything you’re seeing other than the fact that the script calls for something to happen. Saying that this film is better than the original really isn’t saying much as it’s till a horrendously boring, unwatchable disaster.

And with that, let’s never talk about these movies again. Please.

Movies Like Hide and Go Kill 2 (Creepy Hide and Seek)