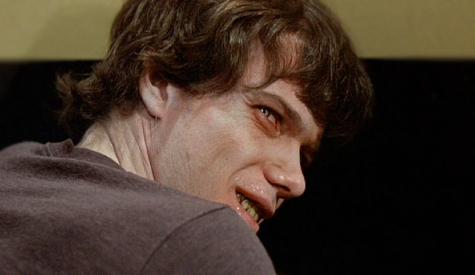 Has there ever been a horror franchise more willing to throw anything at the wall and see what drips down than “The Amityville Horror”? It all started with a pair of remorseful homebuyers who lived for 28 days in a house where a teenager had murdered his family the year before. The house’s sordid past, the early 70’s “Exorcist”-fueled fascination with religious-themed horror, and maybe most importantly, the fact that 112 Ocean Avenue resembles a creepy face, all combined to inspire the homeowners and the killer’s defense attorney to dream up the story over a few bottles of wine that gave birth a branching multimedia franchise that is still viable three decades later.

The story was turned into a book, which in turn was made into a movie which became a runaway hit. The book and the movie each spawned separate franchises, with the books initially clinging to the “based on a true story” gimmick and following the original couple, who through a remarkable stroke of luck that continued their newfound fame as characters in a book series, were followed by the evil after they left the house. The film series, on the other hand, dropped any claim to reality and went through every possible iteration of a horror franchise including a prequel, a 3-D film, a made-for-TV movie, and a few tangentially related direct-to-video sequels that dropped the haunted house in favor of haunted home furnishings before finishing up in the place old horror movies go to die: a reboot. We can only assume that the producers couldn’t figure out a way to shoot the house into outer space.

The films also attracted a bizarrely diverse collection of actors. Richard Roundtree, Patty Duke, Meg Ryan, Terry O’Quinn, Rod Steiger, and Philip Baker Hall are just a few of the actors who have made an appearance in an Amityville movie. To think, all this because a few decades back somebody decided to go with the quarter-circle windows in their new house instead of the square ones.

The first sequel, “Amityville II: The Possession”, showed signs of desperation right out of the gate. It was a prequel to a 70s movie that was clearly set in the 80s. The first two thirds of the movie run through the same tired haunted house standards as its predecessor and then in the last third it shifts gears and becomes an even more blatant “Exorcist” knock-off. Perhaps the most telling sign of the Amityville franchise’s willingness to try anything is the fact that Burt Young, best known for playing Paulie in the Rocky movies, appears here as an abusive father. If you play this movie backwards you can hear the disembodied voice of a coked-up producer saying “Oh, why the hell not?”.

The good news for “Amityville II” is that while it might not have a place among the classics, for sheer camp value it definitely has a place among the best of the bad sequels like “Troll 2”, “Nightmare on Elm Street 2” and “Exorcist II”. It’s fun to watch “Amityville II” as a movie about a family being terrorized not by ghosts or demons but by a malevolent film crew who like to knock things off the wall and make anything in the house that isn’t tied down float around unconvincingly.

There are numerous scenes of family members reacting to or being chased by something we can’t see because it’s shot from the entity’s POV. It’s a pretty shoddy trick and I had a hard time imagining the monster as anything other than a disembodied camera, floating through the air suspended by some fishing line. Part of the same scene is even inexplicably shot upside down – because upside down is scary, right?

The dialogue and acting is even more lifeless than whatever haunts the house. With exchanges like “Somebody touched me!”. “Who touched you?”, “Somebody!”, and gems like “What happened?”, “Brushes.”, “Brushes?.”, it’s no wonder that Rutanya Alda, the actor who played the mother, earned her second consecutive Golden Raspberry nomination for her performance. Her death scene is so over-the-top it must have taken a lot of restraint for her not to jump up at the end, throw her arms in the air, yell “Death scene!”, and take a bow. Much wiser was Jack Magner, who retired from acting with only the lead role of the possessed teen in this movie and the role of “Young Serviceman” in “Firestarter” under his belt.

Bad acting, bad writing, bad directing, bad effects – what else could you possible put in this movie to push it over the edge into pure absurdity? There’s always incest. Yeah, they went there. With shockingly little work on his part Magner manages to persuade his teenage sister into playing “photographer” with him, which involves her taking off her nightgown and striking poses on his bed for his invisible camera. He’s possessed by the combined vengeful spirits of an Indian burial ground. I’m not sure what her excuse is.

After all the haunted house hijinx and incest, Magner finally gets around to killing his family and instead of doing the sensible thing and ending the movie there, we then make an abrupt switch in perspective for an additional half hour of the local priest gearing up to go mano-a-demono against the forces of darkness.

Magner is then arrested and the film becomes a courtroom drama just long enough for us to see acclaimed Tony award winning actor Ted Ross deliver the line “Demonic possession, your honor: possession by demons.”. Then strings are pulled and contrivances are made to get the priest and the possessed boy back in the house for the full Linda Blair finale which includes perhaps the best barrel-roll crucifix evasive maneuver ever captured on film. After a few rounds of the power of Christ compelling him, the boy’s head falls apart, he turns into an alien and the house blows up. The evil is averted for now, but as we all know, it will be back and next time, it will be in 3D.

This review was written as part of The Final Girl Film Club.