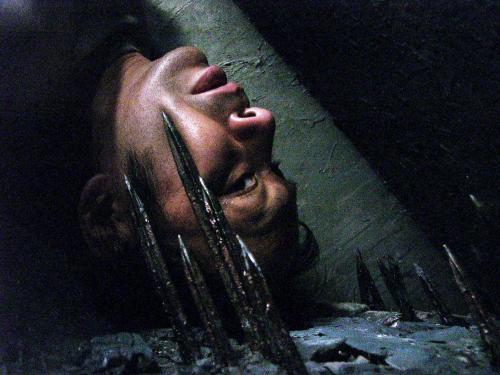 In this day and age, it's very rare for a horror movie to scare me. Having spent nearly two decades consuming just about every genre-related motion picture I could get my pathetic little hands on, I've become almost completely desensitized to the things that go bump in the night. Jump scares are still occasionally effective, though I don't necessarily believe this particular gimmick to be a true measure of a scary movie's effectiveness. It's the films that burrow beneath your skin and lay their twisted seeds inside your bones that send chills down my spine, a sensation I experience less and less with each passing year.

Cult Japanese director Shinya Tsukamoto, the man best known for his industrial horror short "Tetsuo: The Iron Man", has the ability to freak me out in ways few working directors can. Even his "Nightmare Detective" series, a wholly mainstream affair when compared to his previous accomplishments, are downright eerie. However, it was the man's 2005 short film "Haze" that left me thoroughly impressed and, believe it or not, seriously freaked out. If you're at all claustrophobic, you should probably turn back now. Oxygen masks, I've been told, will not be included with your DVD purchase.

Story-wise, there isn't much to discuss. A nameless man (Tsukamoto) finds himself trapped in a very narrow passageway with no visible means of escape. To make matters worse, the guy has a particularly nasty stomach wound that causes him a considerable amount of discomfort. As he shuffles his way down through this interconnected series of corridors, our hero occasionally stumbles across a window that allows him to view the countless atrocities taking place on the other side of the wall. Just when he's about to throw in the proverbial towel, the poor bastard encounters a woman trapped in the exact same situation. Together, they attempt to find an exit to this dark, neverending prison.

"Haze" operates on one simple element: Atmosphere. Since there's no clearly-defined characters and no real story to speak of, Tsukamoto relies on his ability to generate palpable suspense to carry the audience through this bleak cinematic nightmare. Watching our hero push his body through such narrow passages frequently forced me to confront my own deep-rooted fears of confined spaces, which only served to intensify the experience. It's enough to push even the mildest claustrophobics to the proverbial breaking point.

Tsukamoto's direction, not to mention his Aphex Twin-like cinematography and his gut-wrenching performance, also factor greatly into the film's overall success. Although the entire movie essentially takes place in one setting, the audience never feels limited by the lack of scenery. Watching the guy maneuver through these ultra-tight openings is captivating in and of itself, especially once the film races towards its extremely surreal conclusion. I’d love for him to explore this intriguing concept a little further, though I’m not going to hold my breath for that to happen anytime soon.

“Haze” isn’t a traditionally scary motion picture, but for someone who’s completely burned out by what the mainstream has to offer in terms of terror, the film provides enough eeriness to last the whole night through. Locating a copy is rather difficult unless you own an all-region DVD player and don’t have any problems dropping over twenty bones for a 50-minute feature. That having been said, Tsukamoto purists, as well as anyone who has lost their bearings in the world of horror, may want to take a gamble on this one. When I want to accurately express my own personal definition of horror, I show them "Haze".