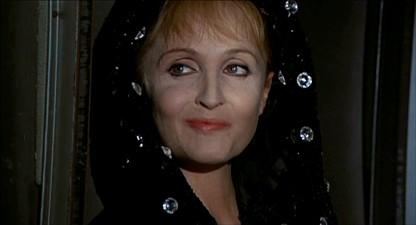 Hatchet for the Honeymoon (Movie Review)

“A woman should live only until her wedding night, love once, and then die.” So says the unerringly evil inner voice of John Harrington, the lead character and bride-to-be-murdering madman of Mario Bava’s “Hatchet for the Honeymoon”. Needless to say, Johnny is a twisted cat. But his murderous bent has a mysterious root; a root that John is convinced becomes a little more exposed each time he kills.

John’s mother was a wedding fashion designer who was murdered in front of him when he was a young boy. John inherited the ruined business as an adult and married a wealthy widow so that he could restore his mother’s empire to its former glory. His wife Mildred is a miserable hag who takes every opportunity to browbeat John and remind him that despite his hard work their fortune is actually just her fortune. John is able to stomach his hate filled marriage because his real passion lies in finding young women on the verge of matrimony and plunging a meat cleaver into them repeatedly.

John views it as a labor of therapy. This is because every time he kills he remembers a little more detail of the night he saw his mother slain. He believes that very soon he will be able to remember the killer’s true identity.
Mildred’s nastiness and suspicion seem to be limited to jealousy around John sleeping with the models he employs, but her watchful eye isn’t the only obstacle John has to negotiate. Inspector Russell is convinced of John’s guilt and drops by after every murder to toss out veiled accusations. Things get even more complex for John when Helen begins modeling for him. John feels that Helen is different from all the other women he’s met and killed. He fights his own devious impulses to keep from killing her but as they grow closer his compulsion to cleave her grows as well.

"Hatchet for the Honeymoon" has long been mentioned as essential Giallo viewing. A big part of the reason is undoubtedly the atypical approach of the narrative. The film stands out because the mystery is not who is killing in the present. Right out of the gate we are handed John, the serial killer as our narrator and central focus. The big mystery, of course, is who killed John’s beloved mommy?
This film feels less Hitchcockian than “The Girl Who Knew Too Much.” Released in 1970 it also has a lot more of the swingin’ flare that is synonymous with the Giallo cycle. The visuals are more hallucinatory, the Jazz score is more in the ‘What the Fuck?’ vain of a Jess Franco film, and the violence is more pronounced. That’s where the good news ends, I’m afraid.

A good number of Giallo films don’t age very well. If you’re a viewer that can’t relish the styles of that era (cinematic and fashion) then most of cycle may be lost on you. "Hatchet for the Honeymoon" suffers heavily on this level. If you have the right spirit the look of the film is actually fun (John’s eye liner and assorted patterned pajamas are something to behold). The big problem here is that the film is a two act drag with a reasonably good but unsurprising third act. A good deal of the drag is created because John is not likable enough to make us care whether or not he solves the mystery. In fact the film features almost no one that really compels us to care one way or the other about the outcome.This combined with its downbeat vibe make "Hatchet" a good candidate for both a "Most overrated Giallo" and a "Most overrated Bava" discussion.

I suppose there is a something to be gained by viewing "Hatchet for the Honeymoon", perhaps to see the representations of John’s oedipal torment and how the story reflects Bava’s own mommy issues and attitudes towards women. But you could just as easily reread the first line in this review and save yourself an hour and a half.