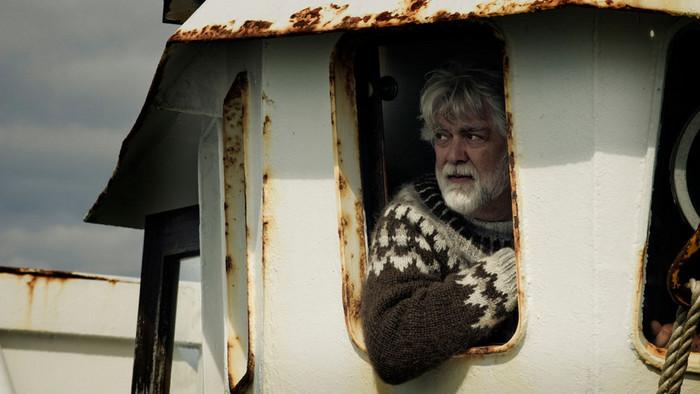 When I first got notice that I was going to be reviewing a film entitled “Harpoon: Whale-Watching Massacre”, my initial response started with “You’ve got to be” and ended with “kidding me.” There might have been an adjective in there somewhere, too. Going through the press materials it just got weirder. It’s Icelandic. It refers to its antagonists as “fishbillies.” Gunnar Hansen’s in it. It was written by one of Iceland’s most well-regarded poets who also happens to be an Oscar nominee who writes lyrics for Bjork. By the end of the press release I was convinced that I was in for a tongue-in-cheek, avant garde satire of American slasher movies. Turns out, nope. Just another crappy horror flick.

If you can’t get the basic premise of “Harpoon” from its title then you clearly aren’t paying attention and should probably go back to doing something more productive than reading reviews of Scandinavian horror movies. “Harpoon” follows a ragtag bunch of broad stereotypes (misogynistic Japanese tourist with his submissive wife, drunken obnoxious Frenchman, sexually frustrated middle-aged women) and plops them on a rickety old bucket skippered by Gunnar “Oh yeah, he is from Iceland, wow, I forgot about that” Hansen. After a freak accident (or was it?... No, seriously, was it? I’m a little confused. Some parts of the movie don’t really make sense.), the would-be whale-watchers find themselves stranded at sea with their rescue coming in the form of a psychotic family of whale-hunters and hippie-haters.

So, yeah, it pretty much wants to be “Texas Chainsaw Massacre” on a boat in Iceland, a fact which is directly referenced by the film’s original name “Rejkjavic Whale-Watching Massacre”, a title that had to be changed for the US DVD release due to America’s deep and abiding hatred of geography. The problem is, in the 36 years since Gunnar Hansen first donned the leatherface there has been no shortage of creepy, inbred, tourist-terrorizing families. Sure, the fact that it takes place on a boat and stars a bunch of Icelandic rednecks gives it a certain novelty factor but these minor tweaks hardly justify the film’s existence.

“Harpoon” could have been saved if the inherent ridiculousness of the story had landed a little better. The movie flirts with being a send-up but is so clumsily executed that the intentional humor falls flat and the unintentional humor is too weird and awkward to elicit laughs. In fact, the funny stuff is so undercooked that the film’s Icelandic marketing campaign had to be changed after its release to tell people that the movie was supposed to be funny.

The story also could be best described as “a hot mess.” Early in the film there’s a character who pretends to be mentally handicapped and seems to be leading the characters into a trap, but this ultimately is a red herring that goes unexplained. Then there’s the matter of one of the Japanese tourists who concocts the most unbelievable escape plan ever and later is revealed as… I don’t know. A psychopath? Yakuza? A robot? She’s some kind of cold-hearted badass with limitless funds but it’s never explained who she is or why she was on a whale-watching ship in Iceland with a couple of middle-aged tourists in the first place. Unless there’s some kind of uber-clever meta-narrative that’s flying over my head here, there are some astonishingly big plot holes in this rust bucket. Only adding to the confusion is the fact that though the majority of the movie is in English, most of the characters aren’t native speakers so it’s not easy to understand what they’re saying all of the time. I even tried to turn on the subtitles at one point after rewinding a few times to hear what I thought might be an important and undecipherable line of dialogue before I realized that there weren’t any subtitles on the DVD.

Despite all my misgivings, I have to admit that I didn’t totally hate the movie. Sure, it has some serious head-scratching moments and the film seems to change its mind about who is going to be the main character every couple of scenes, but “Harpoon” is still the kind of comfortable mediocrity that you can watch and be reasonably entertained before shrugging your shoulders and promptly forgetting about the movie. I’ll even go as far as to say if you only watch one Icelandic whale-watching massacre movie this year, this should be the one. Then again, there’s probably a reality show on Discovery about the same topic so you might want to check that out first and then if you want more you can give “Harpoon” a shot.