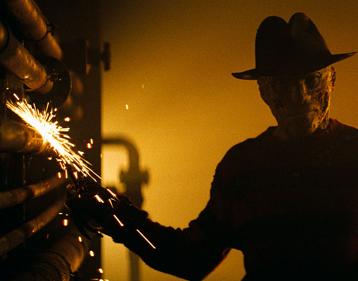 Following in the footsteps of fellow horror icons Jason Vorhees and Michael Myers, Freddy Kreuger has finally received his own remake. Under the banner of Platinum Dunes -- who have made something of a cottage industry out of slasher remakes -- rookie director Samuel Bayer has returned to Elm Street not to pillage fans' memories, but instead to refresh a film whose legacy has in many ways out shined its quality. Wes Craven's first "Nightmare" has many virtues, but it is far from perfect. Bayer, in revisiting the now-classic film, finds measured success by hewing closely to "Nightmare's" legend. But while his filmmaking often surpasses Craven's, there is a tradeoff in vitality and vivacity, such that even as the new "A Nightmare on Elm Street" soars, it feels flat and somehow empty.

Almost everything one remembers from the original film survives in the remake. Freddy -- a pre-school janitor who is killed by local parents in a fit of mob justice -- hunts high school students in their dreams. The students meanwhile attempt to figure out who he is and what he wants. Nancy, the film's protagonist, first fights to stay awake so as to avoid Freddy, only to realize that with the help of burgeoning love interest Quentin she can enter her dreams and face their tormenter.

Bayer, who's career prior to "Nightmare" consisted of commercials and music videos, is to be commended for playing to the film's narrative strengths. That is to say that "Nightmare's" most interesting and successful moments come from the trappings that have always made the series so compelling: the dreams and nightmares infected by Kreuger. A burned out classroom, a snow-covered bedroom, and a gooey birth-like sequence are just some of the strong visuals that thread through the dreams of the film. Much of the backstory is also revealed in this way, with characters encountering more and more of Freddy's story -- and learning how it crosses with their own lives -- just before they are killed off.

It's very clear from the outset that Bayer and the producers at Platinum Dunes intended to make this "Nightmare" a much more serious affair. The visuals -- heavy on darkness and shadow, with muted colors throughout -- only serves to reenforce this. The character of Freddy has undergone a similar darkening. Gone is Englund's almost joyful menacing, replaced instead with a much more foreboding and hard-lined version of the character as portrayed by Jackie Earle Haley. Whereas the Freddy of old was perhaps closer to Batman's nemesis the Joker, Haley's Kreuger is a straight-up Hannibal Lecter-style monster. He exhibits no sense of fun or playfulness beyond a sadistic interest in toying with his victims just before or even after they are dead.

Here, we are given much more in the way of Freddy's backstory than was ever deployed in Craven's original, and this does serve to flesh out Kreuger a bit. But the tradeoff is a monster who is impossible to ever really identify with. In the series's original run, Freddy at times became an anti-hero. Sick and twisted, but also subversive and funny. This previous version of Kreuger reached his fullest incarnation in the crossover "Freddy vs. Jason." As rebooted here, Freddy is no longer someone viewers will want to spend any more time with than necessary. It's fair to say that Haley and Bayer have made the character scarier, but at the loss of a dimension of fun that served to animate many of the films in the earlier run.

While the new Freddy is certainly less fun, he may as well be a clown when compared to Nancy, Quentin and the rest of the gang he stalks throughout the film. For reasons beyond fathoming, Bayer and the producers here have populated the high school of Elm Street with the most earnest, prudish, and downright boring students perhaps ever put to film. There is nary a mention of drugs or alcohol, and the romantic relationships center, from what we can tell, on chaste kisses and professions of heartfelt emotion. The most transgressive of the bunch, Quentin, takes a couple of extra Adderall in his attempts to avoid sleep, and even -- GASP -- steals some medicine from a nurses station at the hospital.

This bizarre choice -- the exact opposite of the choices made by Platinum Dunes in the "Friday the 13th" remake, where nearly everyone was either having illicit sex or taking illicit drugs -- lends the film a moral quality that feels strangely out of place in a film where the dream-dwelling ghost of a pedophile stalks his former victims. It's as if it wasn't enough to denounce and destroy the monstrosity, but the entire film had to be scrubbed of non-essential romance or sexuality so as to make sure no one could accuse producers of using titillation in a film that so centrally features a child molester.

"A Nightmare on Elm Street" walks a strange path -- one that builds on the history of the series to great improvements, but at the same time manages to denude the story of an essential je ne sais quoi. The resulting film shares more in tone with some of the "Saw" films than say the recent "Friday" or "My Bloody Valentine" remakes. Perhaps that's not a bad thing, but it certainly feels like a significant loss. What's clear is that as the inevitable sequels roll forward, the new Freddy will offer little in the way of a sense of humor -- this time around "Nightmares" will be deadly serious.