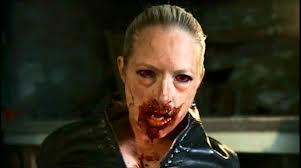 Stop me if you’ve heard this one before. A laboratory gets broken into and an experimental virus is stolen. It gets ingested and turns its victims into animalistic zombies who crave human flesh…

Oh, you’ve seen that movie before? Several times, you say? That’s probably why, unless you have a burning desire to see it all over again, you can skip “Ground Zero.” Directed by Channing Lowe, this is a movie that offers no originality or new ideas on the “zombie outbreak” concept, instead relying on clichés and tired concepts.

“Ground Zero” begins with two political activists breaking into the aforementioned secret lab. One of them finds a serum and decides to drink it, so he can show the world what will happen to him and all the evil these scientists have created. He probably could have proven this just as well by giving the serum to an independent lab (and not had to worry about any of the nasty side effects), but that’s just one example of the logic problems inherent in this movie.

The political activists are quickly killed by a shadow organization, led by the mysterious “Mr. Johnson” (played by David Candland who seems to be channeling Hugo Weaving’s Agent Smith character from “The Matrix”). Mr. Johnson then hires two contractors, Jairus and Greer (played by Mike Langer and Sahna Foley, respectively), to go to the site and clean up all the evidence.

You can probably see where this is headed. One of the dead bodies rises and proceeds to attack them, someone gets infected, and so on. But one of the real failures of “Ground Zero” is that all this set up takes far too long. Before we see any zombies we’re subjected to a lot of scenes of Jairus having phone conversations with his girlfriend (although I’m not sure we can call them “conversations” if they’re just her screaming at him), trite dialogue between the clean up specialists, and discussions where Mr. Johnson tells them how important this job is.

Another real failure of “Ground Zero” comes when Jairus and Greer get to the cleanup site and are met by two other cleaners hired by Mr. Johnson to help with the effort. Played by D.L. Walker and Chris Harvey, they are two of the more irritating film characters I’ve seen in a long time. Nothing against the actors--they do a passable job--but their dialogue consists of quoting movie lines to each other and making bad jokes. Their characters feel forced and don’t fit the tone the rest of the movie was trying to achieve; as a result whatever atmosphere there was in “Ground Zero” grinds to a halt as soon as these two start cracking wise.

Is there anything I can recommend about “Ground Zero?” I will say the performances are all pretty good for a low budget film. The actors take the roles seriously, and no one appears to be cashing in their role. The one exception may be Jairus’s girlfriend, who we only hear on his phone conversations. She’s played by Oksana Georgiu, and her voice made me cringe like metal scraping on metal. But decent performances are not enough to spend time on “Ground Zero” when there are so many other choices out there.