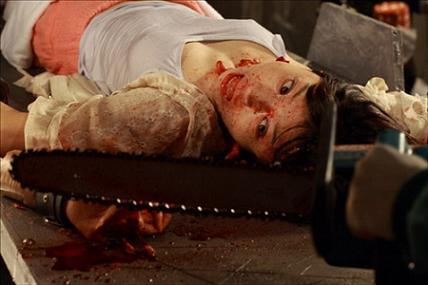 More often than not, people tend to think I'm a bit touched in the head because I shamelessly enjoy what many refer to as "splatter films." Since horror movies stopped giving me the proverbial willies years ago, I satisfy my thirst for the genre by diving face first into pictures that rely heavily on gore, grue, and wanton bloodshed. My favorites are always light-hearted and incredibly silly, delicately balancing gallows humor with an insane level of on-screen violence. I blame both Peter Jackson's "Dead Alive" and "Monty Python and the Holy Grail" for my obsession with this over-the-top brand of physical comedy.

Why I bothered to investigate Koji Shiraishi's notorious 2009 torture epic "Grotesque" (aka "Gurotesuku") can be explained in one simple word: hype. Recently, the British Board of Film Certification (BBFC) rejected the picture, due in part to the film's penchant for unruly levels of sexually-driven depravity. Truthfully, no amount of editing could secure the film a decent rating, as the picture's inherent nature is both cruel and unusual. Strip away all of the nudity and gore and you still have a movie about a guy who hacks away at complete strangers in order to achieve sexual gratification.

In terms of depth and content, there’s really not much to speak of: A severely unstable physician snatches a young Japanese couple off the streets of Tokyo and subjects them to a series of increasingly sadistic humiliations. To elicit the response he desires, the psychopath bounces back and forth between his victims, making one watch while he jabs and pokes and mutilates the other. The only means of escape for this couple, he claims, is for them to help him achieve sexual stimulation. Unfortunately, his arousal generally requires the removal of various body parts. Perversion is putting it nicely.

The one area where Shiraishi manages to excell is the special effects. For such an obviously low-budget production, not a single penny was spared in bringing these horrific situations to life. Even the worst of the gags are well-executed, effectively increasing the level of nausea by several unholy notches. Does this make up for the overall lack of substance? Not quite. Had more attention been given to such elements as characterization, scripting, and direction, the film’s abundance of filth would have effortlessly smashed your tender psyche to mush. As it sits, its just empty gore without much to cling to.