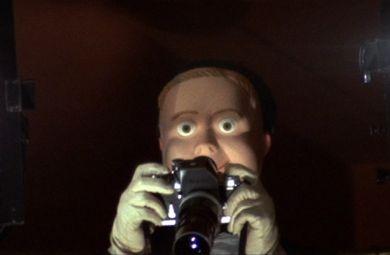 Even though I have made a point to familiarize myself with Dario Argento’s entire catalog it wasn’t until last night that I managed to sit and watch “Four Flies on Grey Velvet”. A couple of outstanding reasons for this being its (until recently) relative unavailability on DVD and the inflated reputation it achieved because of that scarcity. For the longest time it seemed like every conversation I had with the Maestro’s fanboys would have the same structure. Share the personal Argento discovery story, lay out why “Mother of Tears” IS a worthy Argento film, reveal that I haven’t seen “Four Flies on Grey Velvet”…tune out for 15 minutes while my fan status is indirectly downgraded in a category 4 whirlwind of sycophantic geek jizz. There is no joy on Earth so pure in its dangling disdain as that of a nerd who realizes he has gotten there before someone else.

Don’t get me wrong I am only above such pedantic parades by benefit of being on the other end of them one too many times. In every other way I am a Dario Argento dork, loyalist, lover, and occasionally apologist. I relish the opportunity to herald the man’s contributions to horror as visionary phantasms possessed of a splashy, aggressive color of storytelling that is unlike any other raconteur in the genre. In a way his style is actually minimized by his, meant to be flattering label, “The Italian Hitchcock.” This is because Hitch may have cast the template for tension but Dario is the lone master of painting death and mayhem in bold primary colors with odd cinematic time signatures.

“Four Flies on Grey Velvet” follows rock/jazz fusion drummer Roberto Tobias as he tries to outwit a masked killer. Tobias is swept into the killer’s path after he accidentally murders a stalker during a confrontation. Blackmailing Roberto into silence with photographs of the accident, the killer begins to pick-off all of the important people around Tobias. The besieged skins player hires a gay private detective to catch the killer and also enlists the help of his friend and river transient Godfrey. Despite the best efforts of this trio people keep dying. Roberto sends his wife away from the house for safety sake and promptly sleeps with another woman who dies shortly thereafter. The seemingly lightly affected Tobias then sets a trap for the killer only to find he has backed himself into a corner.

“Four Flies on Grey Velvet” has a good deal of Argento flare woven into its 102 minutes. It also has a languid pace that may be unexpected to anyone who has watched the director’s other films prior to viewing this one. Perhaps this was Dario’s attempt to see how far he could stretch the tension without creating slack but it is a choice that does nothing to build on the helmer’s deftly suspenseful work in “Bird with the Crystal Plumage” and “Cat O’Nine Tails”. The red herrings are not as plentiful as the average giallo and Stones-chic though he may be, Michael Brandon as Roberto is a little too pouty and morose to breathe life into the scenes where his character needs to reflect internal torment.

In many ways “Four Flies on Grey Velvet” feels like the logical midpoint between Bird’ and “Profondo Rosso”. This is because while this film has some big shortcomings you get the idea that Dario is trying to figure out how far he can push things. His handling of the sexual politics at the core of the story is alternately nuanced and clichéd, and in many ways more daring than what he did in subsequent films. Likewise with his trademark use of quirky characters as comic relief. The private eye, The Professor, and the mailman are the absurdist missing links between “Bird with the Crystal Plumage” funnyman ‘So Long’ and Daria Nicolodi’s impossibly goofy turn as Gianna Brezzi in “Profondo Rosso”. Argento did imagine this to be his last giallo, so the boundary testing was probably meant to be a balls out final salvo, thankfully it served as more of a trial run for how far he could go.

There is a lot that works to great effect here. The Morricone score lands in a fun place between classic Dario/Ennio collaboration and Jess Franco freakout. The camera work is predictably brilliant with more than a few flashes of the Maestro’s playful sadism. This brutal frivolity is highlighted by a bludgeoning and a staircase fall with unexpected angles and perspective shifts adding a couple more delightful deathly displays to the filmmaker’s already bulging resume. Additionally the film’s editing style promotes traceable disorientation through a nice conflux of dream logic and chronological shifts. Argento dresses his lonely Roman nights in the garb of a fizzling party, throws in a parrot named “Jerk-off” and an homage to “Once Upon a Time in the West” and out of this elemental heterogeny produces a worthy tester film if never an out and out classic.