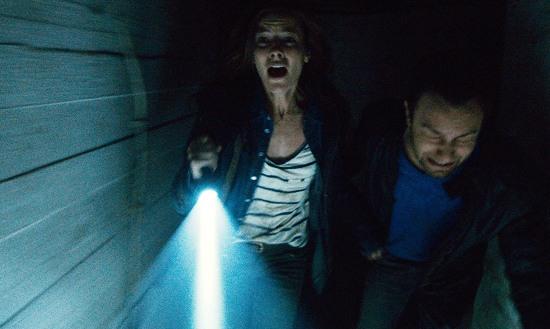 Oren Peli -- writer, director, producer -- rocketed out of obscurity and onto the horror scene in 2007 with the release of the first "Paranormal Activity" film. Capturing, or perhaps recapturing, an exciting and genuine feeling in a genre scene that needed some sprucing up, Peli has become the nom du jour in horror. He's seemed to capitalize on his chance at success more quickly (and commercially) than have previous wunderkinds like Eli Roth or Alexandre Aja -- which may of course have been easier given the ridiculous financial success of "Paranormal Activity."

That being said, 2012 marks something of an important transition point for Peli. His initial foray into television, with ABC's "The River," has not fared well. This places even more relevance on his latest feature film "Chernobyl Diaries" -- only written and produced by Peli, while directed by first-timer Bradley Parker.

If nothing else, what "Diaries" proves is that Peli has a penchant for not necessarily recreating genre tropes, but instead cleverly redeploying and combining existing ideas such that they feel fresher than they should. "Paranormal Activity" was simply haunted house + found footage. Or cinematically, "Poltergeist" + "Blair Witch." The brilliance of that film lies in execution, particularly on its microscopic budget. Peli has since proved he's no one trick pony by adjusting and toying with the simple formula for two new "Activity" sequels.

"Diaries" poses an even simpler equation in many respects: what if "Wrong Turn" unfolded at the site of a town abandoned because of a nuclear reactor meltdown. The thoughtful genre commentary of "Cabin in the Woods" this is not. What "Diaries" is instead is a well-crafted, decently frightening confection.

Discussing "Diaries" flaws -- of which there are several -- is almost immaterial, as the film never really asks the viewer to look beyond its simple set up. The "characters," a term I use purely for ease in this case, are as flat as any Jason Vorhees victim. European tourists Chris, Natalie, and Amanda meet up with Chris''s brother in Kiev. Paul convinces them to take a chance on an "extreme tour" of the village that housed the families of Chernobyl's workers before the facilities calamitous meltdown. We are never asked to care about these people in any way, which makes connecting with the film on any level beyond the surface nearly impossible. We learn just enough about each character to believe their motivations later in the film (e.g. "I have to go into that dark tunnel, my brother is in there!"), but certainly no more.

What allows "Chernobyl Diaries" to rise above the level of random horror movie X is the setting -- the former closed city of Prypiat. Herein we are exposed to Peli's true talents. While any schmoe producer can invent a scary premise, what separates the gory wheat from the bland chafe is execution that animates the horror for audiences. In this case, the town of Prypiat becomes the film's most compelling --indeed, only compelling --character. It has a personality, a terrifying personality. Its various inhabitants move through the space but (almost) always just beyond the camera's view. Director Bradley Parker toys with shot selection, some of which is clearly inspired by his co-creator Peli, but whether its in odd-angled establishing shots or in the eerie snap-zooms, every selection serves to further enliven the atmosphere of Prypiat.

"Chernobyl Diaries" makes a half-hearted attempt to up-level the narrative toward the end of the third act: a moment that is among the film's weakest. The reality though is that Peli and Parker have created something that is perhaps closer to a cinematic amusement park ride than it is to a true film. They effectively lean on horror grammar to craft an experience that while rather thin overall should provide a decent jaunt for horror fans. Even if we're seeing the bleeding edge of what Peli is capable of, he should be recognized as a welcome voice in the lineage of scary movies. If not for his ability to create compelling characters and plots, at least for his clear nose for crafting creepy and creative settings.

War of the Gargantuas