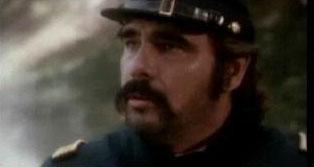 From a story-telling perspective, the Civil War is one of the richest periods of American history. No other era can provide such dramatic stories of romance and betrayal, courage and cowardice and brother pitted against brother. It’s odd, then, that there has never been a great Civil War horror movie, especially since it seems like most ghost stories from American folklore are related to the time period. If you trace American Horror back to its earliest days you’ll even run across a Civil War story, Ambrose Bierce’s “An Occurrence at Owl Creek Bridge.” Why is it that the closest thing we have to a classic Civil War horror movie is “2000 Maniacs?”

That’s why I went into “Grey Knight” really wanting to like it. On paper it looked like it had promise. The cast was a bizarro mix of slumming A-listers and genre favs like Martin Sheen, Billy Bob Thornton, Ray Wise, Adrian Pasdar, Corbin Bernsen, Dean Cameron and two Arquettes (not the good two, unfortunately). The director, George Hickenlooper, helmed a highly acclaimed documentary about the making of “Apocalypse Now” as well as the short film “Sling Blade” was based on. There’s even a bona fide cult legend in the credits, “Vanishing Point” director Monte Hellman, who edited the movie. With all that talent assembled for a movie about African voodoo vampire zombie Civil War soldiers, even if it’s not a slam dunk it must be a hell of a good time, right?

Absolutely not. The only correct context to use this film and the phrase “a hell of a good time” together would be in the sentence “Now would be a hell of a good time to turn off this movie and find anything else to do because no matter what it is, it’s guaranteed to be more entertaining than watching 'Grey Knight' .” It’s hard to imagine what kind of person would enjoy this film. The supernatural elements are so underdeveloped that it doesn’t work as a horror film, but all the vampire mumbo jumbo guarantees that it won't play well with Civil War aficionados.

The biggest offense of the movie is that it’s just boring. I doubt it would even hold the attention of someone with severe brain damage who is attracted to bright lights and sudden movements because it just looks like a murky blue mess and most of the big action fight scenes consist of “hit swords left, hit swords right, stab and die.” You are better off just putting on the old “Mystify” screen saver for 90 minutes. The screen saver at least holds more surprises than “Grey Knight.”

The movie starts promisingly enough. A brigade of union soldiers find Matt LeBlanc crucified upside down with a belt buckle from the Alabama 51st Brigade shoved in his mouth. As awesome as that sounds, it’s not worth getting excited about. A team of Union soldiers led by Ray Wise and Adrian Pasdar are sent out to find out what happened to the Union soldiers and the Alabama 51st with the help of Confederate P.O.W. Corbin Bernsen, who is the only surviving member of the brigade as well as Pasdar’s former colleague at West Point. They are also accompanied by a mute runaway slave girl who has the psychic power of feeding Corbin Bernsen large amounts of exposition whenever necessary.

These exposition dumps reveal that an ancient evil that lived in a hole in Africa was released and brought to the new world by slave traders and it’s this evil that has now infected a group of soldiers influencing them to kill, drink blood and paint their faces with streaks of florescent make-up like members of an Adam Ant cover band. Luckily, they can be stopped by two completely random bits of vampire lore, let’s say, oh, silver and running water.

From his past work as director of "Hearts of Darkness," it’s no surprise that Hickenlooper admires “Apocalypse Now.” What is surprising is how blatantly he rips it off in “Grey Knight,” even down to Adrian Pasdar doing a full-on Martin Sheen impression in the voice-over narration. The difference is that “Apocalypse Now” is a journey into the darkness that lies within a man’s soul. This movie is just a bunch of guys walking and whistling (a good quarter of the film’s runtime is devoted entirely to whistling various renditions of Yankee Doodle) until they eventually find the monsters and have a half-assed battle so everybody can go home.

If Ambien is just not doing it for you and you still want to see “Grey Knight,” you might have to do some old fashioned movie fan detective work. “Grey Knight” is the recently released director’s cut, but the film has also been released as “The Killing Box” and “Ghost Brigade.” Multiple titles is part of the fun in 70’s Eurosleaze, but it’s a major red flag when you’re dealing with relatively recent, American movies. “Grey Knight” is proof positive that a talented cast and crew working on a movie with a cool premise can turn out a turkey worthy of the worst no-budget direct-to-video shlockfest. Frankly, my dear, this movie sucks.