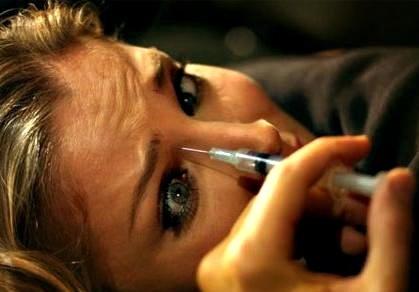 Dario Argento has taken a lot of flack from fans who are awaiting the filmmakers’ return to the form that made him a defining force in the evolution of the horror film during the latter half of the 20th century. But has the form really ever changed or is Argento just taking his style into new technical and aesthetic realms in an effort to keep himself interested in the craft? His early works are hardly uniform even if similarities exist. The gialli at the beginning of his career show a filmmaker trying to sort out perspective and style, conquer themes and transmit a collision of horror and beauty. That collision is Argento’s bailiwick and with it he has generated a bewildering tension; one that is born of the average viewer’s inability to easily compartmentalize seemingly disparate aspects of the human experience. During the most critically acclaimed passage of his career Argento began to add heavy experimentation with colors and architectural mis-en-scene ; the yield of which “Deep Red”, “Suspiria” and “Tenebre” represent his most widely known works to date. But if these films prove anything it is that Argento is not always an easy get for more linear horror fans. Even within his classics there are moments of awkwardness for movie goers who are in search of predictable narrative and realism.

Over the last decade Argento’s tinkering has been influenced by increasing awareness of his reputation, the emergence of digital media and cultural influences beyond the sphere of the Italian and global-American chic that seemed to be staples of his early work. 2001’s “Sleepless” was a veritable glossary of his beloved tropes, 2004’s “The “Card Player” was lensed by Gaspar Noe cinematographer Benoit Debie and centered the plot on tech savvy killer and 2007’s “Mother of Tears” featured something approaching latter day neo-realism during it’s (shoddily executed) riot scenes. Though a conscious thread of autobiographical and allegorical reflections on the filmmakers’ psyche runs through most of Argento’s films his willingness to place himself, or specifically his emotional truths, within his work seems to be at the fore of late. This is certainly the case with his latest film “Giallo”.

“Giallo” is a thriller set in Italy involving a killer who is hunting, disfiguring and killing innocent beauties. Linda (Emmanuelle Seigner) arrives in Turin to see her fashion model sister Celine (Elsa Pataky). Linda falls right into the killer’s world after Celine is abducted by the taxi-driving fiend. She seeks out and enlists the help of Italian repatriate (by way of New York) detective Enzo Avolfi (Adrien Brody). Enzo isn’t convinced right away that Celine has been taken by the Taxi-Killer he’s been tracking. Linda eventually manages to sell him on the idea and tags along as a partner in his investigations. When the killer dumps another victim, this one still alive enough to utter a clue, Linda and Enzo find the key they need to break the case open and perhaps return Celine home alive.

“Giallo” is a perplexing film; one that is bound to lose or infuriate all but the most ardent Argento acolytes. This film plays like a partial parody or quasi- satire of Dario’s giallo film cycle. One reason for this impression is that the film features few of the accepted gialli mainstays. Red Herrings, the reliable/unreliable eye , paranoia, sexual trauma, and playfully unnerving music all seem conspicuously lacking in the film. This gives the viewer the feeling that Dario did not set out to make a giallo at all. Additionally there is enough bad punnery mixed in with personal turmoil material to make this seem a less than earnest effort at scaring the audience.

SPOILERS AHEAD: Argento, is not afraid of occasional cartoony splashes, and he includes many within the action of “Giallo" , but he does so without a clear cut comedic strategy, specifically one that aims to contrast with and augment the violent set-pieces. This makes it even more difficult to regard the film as a serious entry into his horror canon. Case in point: the director gives us a killer, who is dubbed ‘Giallo’ because he has a liver disease that turns his skin yellow ( 'giallo', for those not already aware, is the Italian word for yellow); additionally our jaundiced,sclerodermic looking killer huffs chemicals and takes pictures of beautiful women as he disfigures them (‘makes them ugly’) which he insists is an expression of beauty. The film dips further into the genre and director self -parody by having Brody play both Detective and Killer (under heavy prosthetic) with no admission of, or narrative justifications for the choice. Thematically the director makes it clear that we are looking at two sides of the same coin but considering the performance issues (by both Brody and Seigner) and semi-preposterous story twists that must be endured to reach that revelation, an audience could be forgiven the view that it isn’t worth the trip.

The good news for fans of Argento, particularly those who like the artists’ willingness to portray his own demonic impulses through wild flights of celluloid fancy, is that “Giallo” represents somewhat of a spiritual and technical return to form. Granted it feels like he is teasing us all at points by championing the weird and the gruesome over the ethereal and replacing character with caricature, but the unmistakably Italian soul of Dario Argento seems to resurface in “Giallo”. Whispers of the elaborate crane shots, and architectural flourishes that helped to texturize dread his early work echo through the film, as does the strong sense of place that was lost in his recent American projects “Pelts” and Jennifer”. Are these allusions enough to make this worth your time? Not if you don’t love Dario. On the other hand if you can view his career as a continuum of experimentation and this film as representative of just another thing he’s trying out, you’ll probably not see it as a waste of time.