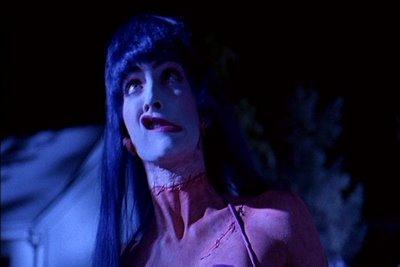 Frank Henenlotter is a different breed of horror filmmaker. He definitely gyrates wildly to his own unique rhythm, instilling a sense of fun-loving absurdity into what would otherwise pass for watered-down psychodramas featuring a bevy of pathetic individuals not unlike myself. And while many proclaim "Brain Damage" to be the man's ultimate masterpiece, I'd have to say that "Frankenhooker" is truly my favorite Henenlotter film. Of course, that could very possible change at any given moment. In fact, I regret having written that. I wish I were kidding.

In case you're not familiar with the material, "Frankenhooker" tells the intimate tale of Jeffrey Franken, a "bio-electric technician" who loses the love of his life beneath the sinister blades of a sadistic remote-controlled lawnmower of his own design. Although his sympathetic mother tries her best to bring her old son out of his deep, dark depression, there's really nothing she can do to ease his aching heart. What's a bio-electric engineer to do when his lovely little lady is cut to ribbons? You guessed it: bring her kicking and screaming back to life.

As it generally goes with situations such as this, things go horribly wrong during the resurrection process. Instead of restoring the girl he once knew, the experiment transforms our hero's dismembered lover into an unholy amalgamation of all the hookers he used for parts. Understandably freaked out, the city's most deranged call girl escapes onto the streets of New York, leaving the her former lover unconscious on the floor of his suburban garage. Can this nerdy engineer rescue his patchwork partner before she turns New York's underbelly into a veritable bloodbath?

Every inch of "Frankenhooker" is coated in deep-fried sleaze, its humor dripping like yellow infection from a pair of soiled underwear. Although the story is simple and the performances from the supporting case leave much to be desired, the film still has the ability to charm those who don't mind laughing at a loser drilling holes in his skull to help kick-start his creativity. As outlandish as they are, these sicko gags never feel gratuitous, never feel as though they're included for the sake of shock. That's the brilliance of a Henenlotter picture; despite the increasing number of outrageous gags and gore, they never feel out-of-place. There's a natural ease to the comedy, making one-eyed brains and mutant body parts seem like an everyday occurrence

The opening scene, which finds our hero working diligently on a bizarre science experiment in his soon-to-be-deceased fiancee's kitchen, perfectly sets the tone for things to come. It gives you the impression that all of the craziness that takes place over the span of these deranged 90 minutes is as natural as a severed head crashing through a plate glass window. I have an affinity for films that effortlessly give you the feeling that you've turned the corner into an alternate universe filled with twisted abominations and madcap characters. It also helps matters considerably that Patty Mullen has the uncanny ability to twist her face into an array of interesting expressions. Yes, "Frankenhooker's" brilliance is hard to match.

Thanks to the fine individuals working their magic at Unearthed Films, Henenlotter's classic horror/comedy is now readily available to the people who would appreciate it the most. In my humble opinion, it's easily the brightest jewel in this underrated director's warped crown, a strangely personal film that still bears the man's penchant for unchecked weirdness. If you have the chance to experience "Frankenhooker" for yourself, by all means, do so immediately. Not only is it a great genre-bending hybrid, it's also a damn fine movie in general. Granted, the picture isn't for everyone; if you can't laugh at a crack-addicted hooker exploding into pieces, chances are you won't be impressed. As strange as it may sound, not all of us can be morally bankrupt.