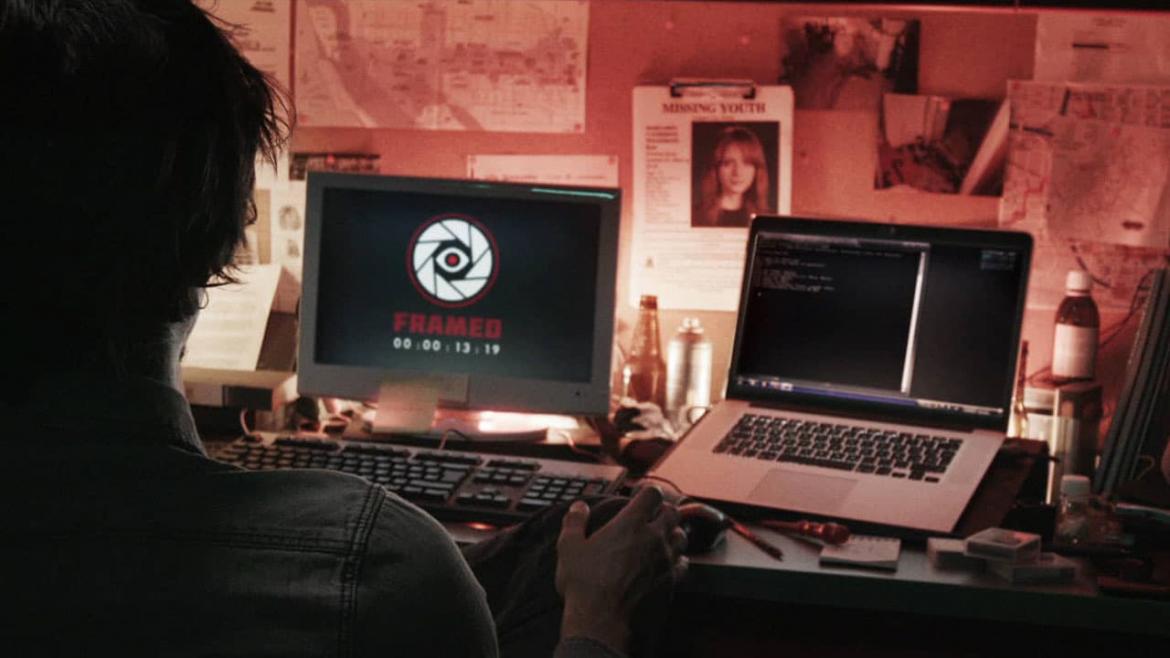 At first glance Framed, a film adequately polished for its low budget, is deceptive in that it is largely entertaining given how frenetically paced it is combined with a vicious crescendo of shocking imagery. Upon deeper inspection, its social media commentary and take-down on the ever increasing public curiosity of sensationalized violence is merely a facade.

Framed presents the titular social media app which allows users to stream whatever the hell they want to whoever stumbles upon the content. The system of checks and balances however seems to have been woefully unchecked, bringing a rise of documented bloodshed which ranks among the highest levels of viewership. A group of friends gathering for a going away shindig find themselves trapped in a house that's become the target of a particularly deranged Framed super user who proclaims to hear the voice of the entire internet and is here to deliver what the people really want. And what do the people want? Various forms of escalating carnage.

Director Marc Martínez Jordán seems to want to his cake and eat it too in his first solo run as a feature director. The film simultaneously offers a satirical comment on the disgusting depravity that the fictitious social media app has wrought upon the world while reveling in the depravity on screen. The film never quite finds a way to justify the means of its message. Eventually, the events happening in the house become part of a news story in which the news outlet airs the events unfolding on live TV, the same news channel that's trying to create a moral outcry about the social media. Again, perhaps a commentary on what news stations do to boost their ratings by exploiting tragedy through shocking events.

All the while, the performances are fine, some of which have a winking quality to them and the events though its Alex Maruny's performance as the unnamed leader of the home invading Framed streamers that is particularly unhinged. He's a zealot dedicated to his "art" seemingly channeling the bloodthirsty social commentary of the public at large that the flmmakers believe we've all become. His lunacy is no doubt entertaining, but it all also makes you feel a bit regretful for having laughed at something he reacts to based on the gratuitous nature of the actions being portrayed.

Framed certainly has something of a mean streak too it. The unflinching enjoyment characters get from inflicting horrific violence for the sake of viewers is a true embodiment of human evil. The effectiveness of the script's social media stance is up for debate, but Marc Martínez Jordán's film is certainly a love it or hate it candidate due to how deceptively entertaining it is when compared to how unnecessary the violence feels.

Screened as part of the Buried Alive Film Festival 2018.

Underworld: Rise of the Lycans