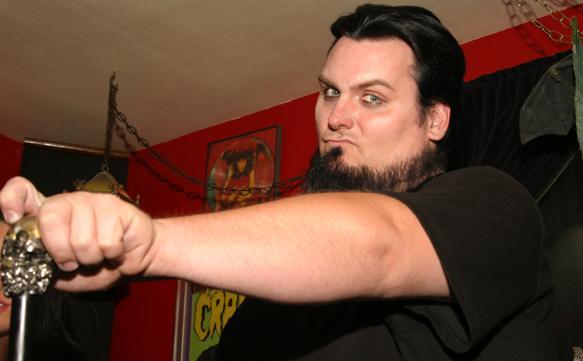 Fist Of The Vampire (Movie Review)

Whenever I sit down to review low-budget independent horror movies, especially those released by cult distributor Brain Damage Films, I make an honest, concentrated effort not to hold them to the same standards as their Hollywood-generated brethren. Less-than-stellar acting, wonky direction, and cheap special effects are almost always par for the course, and for the most part, they're relatively easy to overlook. Assuming, of course, that the project in question comes packaged with a decent story and a director who understands the limitations of his budget. If those two key elements are missing, then we're going to have issues.

On that note, "Swamp Zombies" director Len Kabasinski's blood-sucking martial arts epic "Fist of the Vampire" straddles that extremely fine line between genius and idiocy. Sandwiched in-between some fairly decent fight sequences and several over-the-top shoot-outs lies an abundance of lousy performances, pathetically weak CGI, and some of the murkiest photography I've seen since the last Brain Damage-released horror flick I watched. To be perfectly honest, if someone told me that the entire movie was filmed through a hideous pair of soiled panty hose, I honestly wouldn't be that surprised. I think may vision may be irreversibly damaged.

Brian Anthony stars as Lee Southward, a tough-as-nails, take-no-prisoners DEA agent who is sent deep undercover to investigate an illegal gambling ring teeming with drugs, violence, and, of course, a legion of hardcore vampires masquerading as urban gangsters. In order to get as close to the action as humanly possible, Lee signs up as a street fighter, a decision which pits him against the roughest underworld brawlers the city has to offer. In true badass fashion, our hero quickly lays waste to club's harshest champions, causing the blood-suckers in-charge to suspect that their newest attraction isn't quite who he claims to be. Trying to piece together the rest of film's muddle plot may result in crossed eyes and pounding headaches.

As a fan Kabasinski's earlier effort "Swamp Zombies" -- a terribly flawed but strangely entertaining slice of B-grade cheese -- I figured "Fist of the Vampire" would be an enjoyably campy way to burn through 90 minutes of my life without expending too much brain power on my part. Sadly, this slightly rancid vampiric variation of "Fight Club" suffers from a debilitating number of problems, including a handful of undeniably foul performances, a complete lack of proper lighting, and some truly awful green screen work. Why microbudget filmmakers frequently incorporate extensive CGI into their productions is beyond me, especially when the process is utilized for the most mundane of shots.

However, anyone with the uncanny ability to look past the film's numerous shortcomings will find more than enough bloody gunplay and bone-crunching kung fu to fill fourteen big-budget Hollywood productions. Kabasinski, a skilled martial artist, infuses the picture with countless action set pieces, some of which actually manage to look incredibly cool despite the obvious budgetary limitations. The majority of these fights, though obviously choreographed, are surprisingly tense and sufficiently brutal. I've a feeling that, given a decent budget and a suitable script, Kabasinski could deliver something truly remarkable.

I've got a very strange love/hate relationship going with "Fist of the Vampire." A large section of my brain appreciates Kabasinski's dedication to his craft, as I honestly believe that he's capable of delivering the goods if given the right set of cinematic tools. On the other hand, the picture's overall lack of polish, in addition to its lackluster cast and the questionable use of green screen, tip the scales towards the negative end of the spectrum. Fans of bootstrap cinema, as well as those who frequently delve into Brain Damage's deep catalogue, will probably love the flick, oozing pustules and all. Good for them.