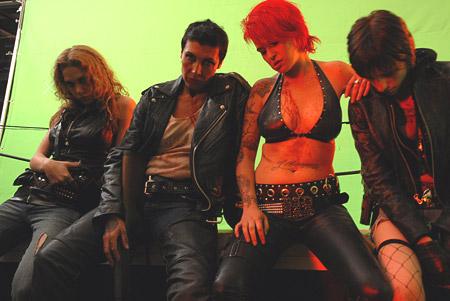 In 2005 we saw the birth of the Project Greenlight produced film “Feast”, and it was pretty damn good. Now three years later the studios have opted to tackle the story of mutant monsters once again, carrying on right where the first left off; actually, exactly where the first one left off! It’s the next day and the monsters have moved on to a nearby small town. We gather together once again as small group of people band together to protect themselves from the fearsome beasts.

“Feast 2” sets out to accomplish one thing and that’s to disgust. They do that and they do it well. There is so much bodily fluids floating about in this picture you may need a shower by the time you’re done! Bile, pus, puke and blood... and shitloads of it. Really, that should probably be the tagline because that gives us the gist of the movie! Once again though, the makeup work and gore are great, however they rely a bit too much on the CGI blood which takes away from the overall effect. It’s not too bad, but it’s bad enough to be noticeable.

A nice touch this time around too was an up close and personal (literally) look at the monsters. Deciding to disesct a dead creature to see what makes it tick, we’re shown literally everything inside the belly of the beast. Where most filmmakers would leave the star of the show as the ‘same schtick, extra numeral’, the makers of “Feast 2” take it another step forward and change things up. A nice touch, especially in a franchise film! It didn’t necessarily make sense; it was good for a laugh and some shock and awe though.

The characters have mostly been changed up as well this time around. The manly biker chick makes a return in the form of her twin sister out for revenge; she doesn’t do much but walk around and look butch. In fact, there are only two returning characters; Clu Gulager as the Bartender and Honey Pie, the hot chick that ran off in the escape truck in “Feast”. As I mentioned, the sequel takes place the very next day and Honey Pie’s return is handled logically. The rest of the characters consist of a jive talking used car salseman named Slasher, a pair of little people luchadores named Thunder & Lightning as well as a couple of others. These guys were truly the only interesting ones of the bunch however.

There are some great moments in “Feast 2”, much as there were in “Feast”. Unfortunately, the writers just forgot to add a plot to the movie. There’s a hint of a plot with the biker gang searching for ‘somebody’ from the first movie to get revenge on the leader’s sister’s death. They never do anything with it though. Instead, they concentrate on nothing but splatter, splatter, and more splatter which in the end, becomes boring. The splatter is done quite well, but much like the “Transformers” movie; too much of a good thing becomes repetitive. By the end of the “Feast 2” I was able to look away and do other things until I heard somebody scream. That’s your clue that something wasn't quite right here.

“Feast 2” is merely okay. There are some great filmmaking moments here and there, and some great effects work. With a great story this one could have been something more, but it appears they forgot to focus on that part enough. With a lack of focus on narrative, this one becomes forgettable for most, while remaining a decent watch for those gore aficionados out there.