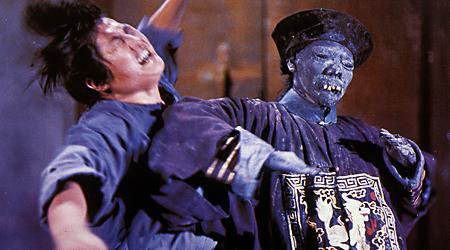 The Chinese Hopping Vampire has to be one of the weirdest monsters ever to terrorize the screen that didn’t spring from Lloyd Kaufman’s imagination. Properly known as Jiang Shi, they arguably have more in common with Western zombies than they do vampires. The Jiang Shi are dead bodies reanimated by Taoist priests that suck the life force out of the living. They hop around stiffly with arms outstretched, tongues hanging out of their mouths, tracking down humans by listening for their breath. The preferred way to kill them isn’t with a stake to the heart but rather by attaching a piece of yellow paper with a prayer written on it to their forehead. Like I said, weird.

Sammo Hung’s 1980 genre-bending Kung fu-Horror-Comedy “Encounters of the Spooky Kind” is the movie that can be credited with taking the Jiang Shi out of Chinese legend and turning them into midnight movie icons. Hung directs and stars as “Courageous” Cheung, the village braggart who claims to not be afraid of anything, which naturally enough leads his buddies down at the local grass jelly stand to constantly play pranks on him to test his bravery.

Unbeknownst to Cheung, his wife is having an affair with a local government official who decides to get rid of his rival once and for all. The official consults with a Taoist priest who is supposedly familiar with witchcraft and doesn’t mind bending the rules a bit. Because not killing is one of the central tenants of their sect, the priest’s younger colleague refuses to help him and runs off to warn Cheung.

Cheung accepts a dare to spend the night in a temple filled with corpses, and just before he enters, the good priest finds him and advises him that he faces great danger inside. During the night, the evil priest resurrects a vampire which Cheung hides from in the rafters until the rising sun forces it back into its coffin. The following night Cheung is again tricked into staying in the temple but this time the good priest tells him to arm himself with 50 chicken eggs and the legs and blood of a dog. Cheung does so and keeps the vampire in its coffin by chucking eggs at it every time it tries to get out. This works well, but it turns out that the dishonest shopkeeper didn’t have enough chicken eggs and slipped a few duck eggs into the basket... this is a problem you see, because only chicken eggs work on Jiang Shi. You can see the dilemma.

At this point the vampire comes to life and we’re finally treated to the first real Kung Fu sequence of the film. Sammo Hung was trained in the same Peking Opera troupe that spawned Jackie Chan, director of “The Transporter” Corey Yuen and many other Hong Kong cinema notables. Like Chan, Hung walks the line between kung-fu and humor, but has a comedic ace up his sleeve in the fact that he’s a husky dude that has considerable kung-fu skills. After surviving a night in the haunted temple yet again, he finds himself being framed for murdering his wife. There are a few more entertaining fight sequences, including one very “Evil Dead 2”-ish scene where the evil priest possesses Cheung’s fist and forces him to beat himself up.

The grand finale is a showdown between the two priests with their altars on scaffolding high up in the air (because in Taoism, size does matter), while they use magic to possess their minions with the spirits of various Gods and demons in a kind of weird precursor to Pokemon. It’s basically an excuse to let Sammo Hung show off his Monkey Style and his spear-fighting skills, all while jabbering away in a high pitched “possessed” voice.

“Encounters of the Spooky Kind” is a simple movie. It doesn’t demand much out of its audience and in turn we shouldn’t expect much out of it other than some cool fights and a few laughs. It’s pretty successful on both counts. The fight scenes might be few and far between in the first half of the movie but the pace picks up considerably at the end.

The comedy manages to be silly without ever crossing that line into annoying that so many Asian comedies find themselves on the wrong side of. I only find people falling down and making funny faces amusing to a point, but Sammo Hung, like his friend and compatriot Jackie Chan, is a gifted physical comedian and he can take what would be a lame gag for most actors and turn it into an inspired comedy bit. He has the kind of charisma and self-deprecating charm that makes any scene with him in it a joy to watch.

Looking at “Encounters of the Spooky Kind” from the perspective of a horror movie works surprisingly well. Although it’s typically classified as a Kung Fu movie, a significant portion of its running time plays down the fighting in order to build up the horror elements of the story. The film almost has a Hammer feel to it, which is probably due to the fact that the obvious forebearer to this film would be the Hammer/Shaw Brothers co-production “The Legend of the 7 Golden Vampires”, which featured Peter Cushing in China fighting Dracula’s kung-fu vampire army. The special effects and make-up are cheesy, but endearing , and while the movie isn’t scary by modern definitions, it’s probably capable of giving nightmares to an unsuspecting nine-year-old, and really, isn’t that what horror movies are all about?

“Encounters of the Spooky Kind” tries to be at once a kung fu movie, a comedy and a horror film and does a good job on all three fronts. It also marks an important footnote in Asian horror movies that set off a mini craze for Jiang Shi. Not only did the movie spawn a sequel and the long-running and oft-imitated “Mr. Vampire” series, but also perhaps the most bizarre movie cross-over ever, when hopping vampires where somehow incorporated into later installments of the “The Gods Must Be Crazy” franchise. Probably the biggest thing “Encounters of the Spooky Kind” has going for it is that for sheer entertainment value, it’s hard to beat a movie that involves a fat guy kung-fu fighting hopping vampires in crappy monster make-up.