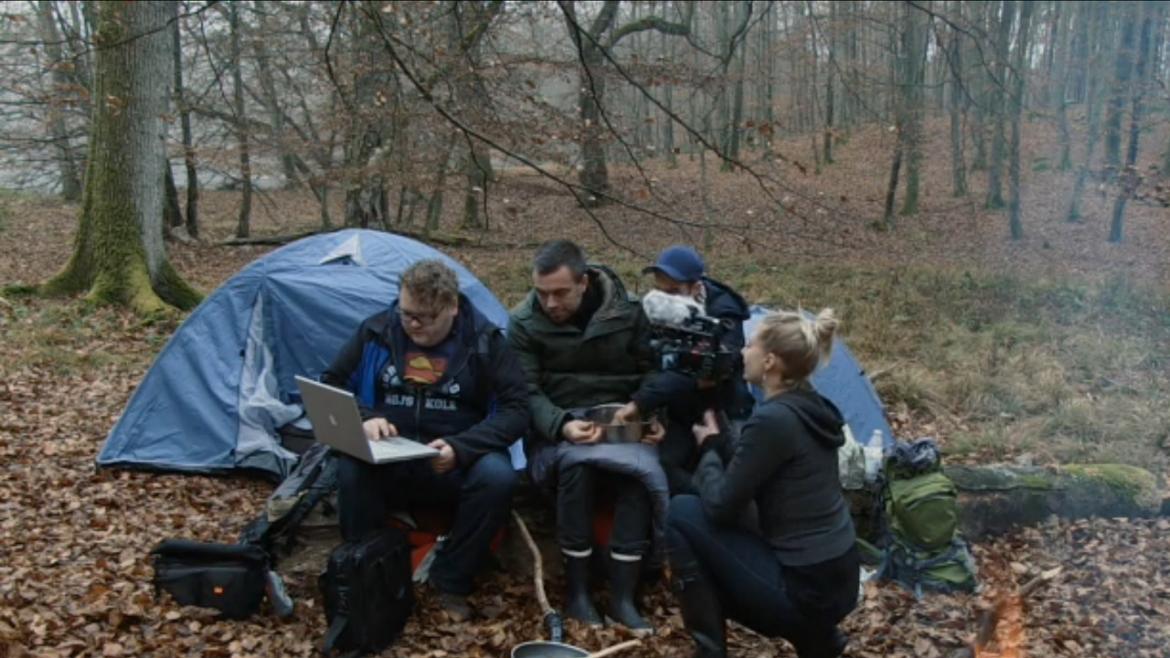 I don't know what it is, but foreigners seem to have a much better grasp as to what makes found-footage work than anyone making movies stateside. The tropes that make us roll our eyes with each new shaky cam flick getting dumped into theaters in the United States just don't seem to be as groan inducing when there are subtitles on the screen. The latest under-the-radar Danish flick, Encounters, is an example of what I'm talking about. It's the kind of alien flick that makes Oren Peli's Area 51 look as though it was filmed by an adolescent child- even while it suffers from its own brand of generic flaws.

Encounters finds a filmmaking crew out on the road looking to shoot some on location footage for their upcoming alien fantasy flick of the same name. Along the way one of the crew members, Fjord (Kristian Fjord) hears the director and another crew member plotting to include moments that the actors and crew are not prepared for in order to illicit real fear emotions. Before long, some strange happenings begin to unfold and the crew are at odds if what is happening is real, or an attempt to manipulate the actors to have more genuine reactions.

The Blair Witch Project is a clear and present source for inspiration running rampant in Encounters. The actors are constantly referencing and joking about the methods used by the filmmakers in that film, all the while there's a clear respect and attempt to mimic that film's magic. There's a great sense of humor at the heart hear, including a self referential streak that comes in from time to time to acknowledge tropes of the genre that are then used within the film itself. This in and of itself does not give the film a free pass to commit the sins that they are making fun of, but it keeps it from being able to be taken too seriously.

The most impressive aspect of Encounters though is that for a film with a shoestring budget the special effects are at times dazzling. There are some incredibly staged set pieces and shots that are so epic in scale it's almost a shame that the film didn't have a shot at some kind of theatrical release- though there are some pretty distinct reasons it might have been good it didn't have one as well. The amount of time the effects are on screen are brief to be sure, but they are amazingly effective at setting the tone of the scenes and at creating tension. The sound design works in harmony with much of the visuals to create a sense of dread and expand the scope of the footage. The most disappointing thing to come out of all the fantastic aspects the film had going for it are that it settles for the easy, cliched found-footage ending. The finale is marred in the typical trappings that make many of the American found-footage flicks as uninspired and unmemorable as they often end up being.

Encounters joins the likes of Troll Hunter or the even lesser known Evidence as films that flew well under the radar to completely miss their shot at an expanded audience. Certainly the film is not set up for the type of mainstream success as the cookie cutter found-footage movies we're so used to seeing in theaters. Encounters, while not without it's own shortcomings manages to dazzle with some perfectly shot set pieces and enough mystery to give it a reason to be encountered.