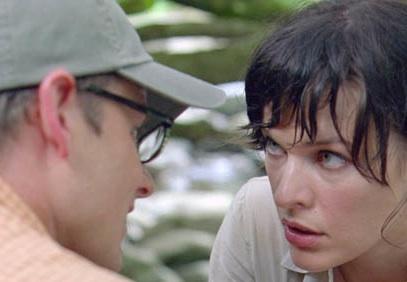 "A Perfect Getaway" arrives in theaters at a fortuitous time. Summer has transitioned from effervescent delight to overheated slog, and as the temperature (and the humidity) have risen, so too has our desire for a snappy and refreshing cinematic experience. In many ways -- "Getaway," a product of veteran Hollywood filmmaker David Twohy -- provides that experience. It's breezy and exciting, not to mention brisk, at just a hair over 90 minutes. The only trouble is that in the interest of crafting a summer movie-going experience that could meld into the dog-days like so many lazy barbecues and six-packs, Twohy also brewed up a film that's as satisfying as a melted margarita: sure it will get you drunk, but it's just not cold or sweet enough to be worth your time.

As "Getaway" opens we see camcorder footage from a wedding of two newlyweds, Cliff and Cydney (Steve Zahn and Milla Jovovich). Cliff, a burgeoning screenwriter, and his adventurous bride are heading off on a dream honeymoon in Hawaii. We catch up with them as they zip through the low hanging canopy in a rented Jeep, before arriving at a way-station that will be the start of a long hike to undeveloped beaches. Their adventure is only slightly jarred by the appearance of a raggedy drifter couple, but they persevere and are soon on their way into the wilderness.

The news of a grisly double homicide on mainland Hawaii makes its way to the newlyweds just as they are about to set off, and it tinges their hike as they travel forth. It's into this anxious situation that a third couple insinuates itself -- Nick and Gina (Tim Olyphant and Kiele Sanchez) are on a romantic getaway all their own, and the two couples become reluctant but quasi-friendly trail partners.

The interaction between these two couples -- rife with one-upsmanship and female bonding -- drives the majority of the plot of "Perfect Getaway" forward, and quality performances by each cast member keep the film interesting even as the tension builds at what can often feel like a glacial pace. Twohy also had the good sense to set his thriller in some of the most scenic environs on Earth, so just when your mind starts to wander he can slap you back to attention with a helicopter shot of soaring cliffs and crystal clear oceans.

Executed with a high standard of professionalism, all these distractions succeed in masking what eventually becomes "Perfect Getaway's" undoing. After a handful of misdirections, the film boils down to a very traditional whodunit. In itself, this is not a problem, but with only so many potential suspects, much of the tension feels overheated, and once the plot finally does unravel, the answers are not nearly as shocking or interesting as they might have been. The film's temperature, which had been on a low simmer for most of its duration, jumps to inferno in the blink of an eye, and just as the fire is really starting to get cooking, it's burned itself out. None of this makes "Perfect Getaway" upsetting or insulting -- it's so impeccably crafted that you may really want to like it -- but ultimately it feels hollow and deceitful.

Early on in the film Cliff and Nick perform a little verbal dance with one another over the nature of plotting out a movie, something Cliff has had success with and Nick hopes might one day make him rich. It's an obvious and, at first cute, wink by an experienced filmmaker to an audience he knows is trying to guess his next step. It serves the purpose of making his film feel like a parlor game; he's waving the cards in front of our faces, announcing that he'll make the one we choose disappear.

Only we don't necessarily want our movies to feel like parlor games, even when we're expecting the sleight of hand. And in the rare occasions where this type of approach works -- "The Prestige" being the best example -- it's because the moral and narrative implications justify the artifice of the trick. "Getaway" sadly succeeds at its first goal of being a light, summer treat, but that means that it couldn't possibly have succeeded in its larger, and ultimately, more important goal of having us care about the cinematic gymnastics that it has just performed.