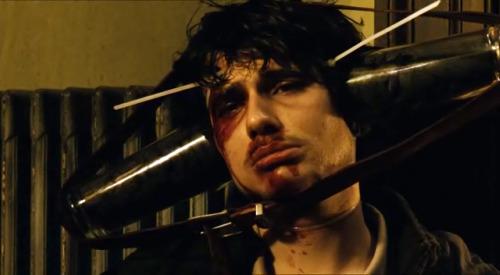 Over the past few years, I've noticed a sharp decline in the quality of movies based on the works of genre legend Clive Barker. "Hellraiser", "Candyman", and "Lord of Illusions" are still the strongest of the bunch, though the Barker-directed guilty pleasure "Nightbreed" certainly deserves an honorable mention. It's not that "The Plague", "Midnight Meat Train" and "Book of Blood" are unwatchable, mind you, but they don't adequately capture the power and visceral nature of their literary cousins. To be fair, bringing Barker's vivid imagination to life on the big screen is no easy task, so I'm usually pretty forgiving of an adaptation's shortcomings.

"Dread" was never one of my favorite Clive Barker stories, so it's no surprise that Anthony DiBlasi's cinematic version of the tale is somewhat lacking in entertainment value. It's hard to execute a character piece when there isn't an interesting, well-developed character anywhere in sight. What you're left with, unfortunately, is a pseudo-intellectual torture horror movie that desperately want to be something different, something much more high-brow and sophisticated than its brethren. Just because you overload your script with endless streams of long-winded dialogue doesn't mean your production is smart, thought-provoking, or, more importantly, enjoyable.

The setup is fairly rudimentary: Three edgy college students, eager to finish their college theses, agree to work together on a project that explores the nature of dread. Several individuals are routinely interviewed, their deepest, darkest fears are brought to light, and the results are incorporated into a documentary spearheaded by sensitive filmmaker Stephen Grace (Jackson Rathbone). Although our hero is quite happy with the end result of their collaboration, his partner, the deeply disturbed Quaid (Shaun Evans), isn't nearly as satisfied. In fact, he doesn't feel they've accomplished anything remotely interesting with the project. As such, Quaid begins to steer the assignment into darker territory, a decision which will put their friendship to the ultimate test.

The first hour of "Dread" consists mostly of dialogue. Lots and lots of pointless, meandering dialogue. Which is fine, of course, when the picture actually has something important or relevant to say. Unfortunately for us, writer/director Anthony DiBlasi -- who also produced “Midnight Meat Train” -- uses the initial 60 minutes of the film to fruitlessly mine the depths an extremely tired subject. The exploration of fear and its effect on the human psyche is a well-worn path within the genre, but DiBlasi treats the subject matter as if it were a fresh concept, a wholly original idea. Guess what? We already know that people tend to get frightened when forced to confront their respective fears. Besides, doesn't the "Saw" franchise have this concept copyrighted by now?

Interestingly enough, the most effective scene in “Dread” appears to have been lifted directly from Barker’s own “Nightbreed”: A quaint suburban family is struck down by a gruesome killer in their suburban home, an event which is observed by a small boy from the upstairs landing. Upon noticing the child, the murderer slowly makes his way up the stairs, much to the silent horror of his pint-sized victim. Considering the film’s overall lack of original ideas, this really comes as no surprise. And while strong performances from Rathbone, Evans, and Hanne Steen make for an interesting watch, there’s nothing about “Dread” that will linger after it’s over. Well, aside from disappointment, of course.