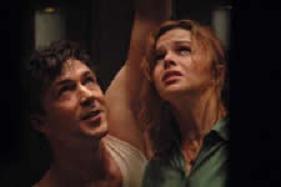 If anyone on the planet expects their gimmicky one-location motion picture to work properly, they'd better make sure it comes equipped with solid direction, great writing, and a smart, likeable cast. Otherwise, you're just going to irritate everyone, and that's never a good thing. Rigoberto Castaneda's watered-down 2007 thriller "Blackout" -- a film which just recently arrived on DVD courtesy of Thinkfilm -- has the distinct honor of containing none of these three crucial elements, guaranteeing that anyone with more than a passing interest in cinema will begin to violently wretch after the first fifteen minutes. Again, this sort of reaction is never good.

Perhaps my disdain for "Blackout" has more to do with my intolerance for lazy filmmaking than it does the movie itself. In this day and age, when every original idea has been recycled beyond the point of recognition, there's simply no excuse for this sort of half-assed endeavor, especially when directors working on remarkably smaller budgets are capable of achieving so much more. However, as visually unpleasant as it may be, it's not the picture's murky aesthetic that completely ruins the experience -- it's rookie writer Ed Dougherty's brutally comatose screenplay. Figuring out where this simplistic mystery is headed isn't exceptionally hard to do, even if thinking really isn't your forte.

Three vastly different individuals from the same snappy apartment complex-- in this case, Claudia (Amber Tamblyn), (Karl) Aiden Gillen, and Tommy (Armie Hammer) -- find themselves inconveniently trapped inside a malfunctioning elevator while everyone else in the building is out enjoying their holiday. During a particularly clumsy and pathetically desperate escape attempt by Tommy, the elevator's cable snaps, leaving the sweaty compartment suspended solely by its emergency brakes, which could, of course, fail at any given moment. As tensions run high and personalities begin to clash, these three wholly uninteresting losers must find a way to break free before they find themselves smashed to pieces at the bottom of the shaft.

Each character's respective back story is presented through a series of painfully uninteresting flashbacks. Claudia, we learn, is socially awkward and a bit of a stick-in-the-mud, while Tommy is looking to run away with his saucy girlfriend Francesca. Karl, on the other hand, isn't nearly as well adjusted. Apparently he's a bit of a cruel prick with a penchant for picking up sexy girls at night clubs, drugging them, and engaging in some truly twisted sexual perversions. I'll give you a hint: open wounds, salt, and rape. If that's not a recipe for fun on a Friday night, then you should really consider spending more time in Kentucky.

Problem is, none of this supposedly engaging material, from the characters to the film's central premise, is the least bit entertaining. Karl's increasingly unraveling sanity, Tommy's broken leg, and Claudia's dying grandmother should help create a bit of tension, but all it really manages to generate is a long string of yawns, heavy eyelids, and a sudden, inexplicable need to void your bladder every fifteen minutes. The ending has half-a-surprise in store for those who make it through to the end, but I seriously doubt few will complete this admittedly impossible mission. I, too, would have willingly abandoned my quest were it not for my dedication to this review. It's been a long time since I've been this miserable watching a movie.

“Blackout,” like “Mission to Mars” and “You’ve Got Mail” before it, actually caused me great physical discomfort, and this is coming from a guy who has watched Mark Pirro’s curious monster flick “Rectuma” on three separate occasions. This isn’t just another bad horror movie, people -- it’s a bad movie, plain and simple. The film’s only redeeming quality is Amber Tamblyn, who looks as if she’d been forced to participate in this dodgy production by the Russian mob. Unfortunately, when someone considers Amber Tamblyn to be your movie’s only saving grace, chances are they’re just trying to be nice. Besides, "nice try" just sounds so condescending.

A Horrible Way to Die