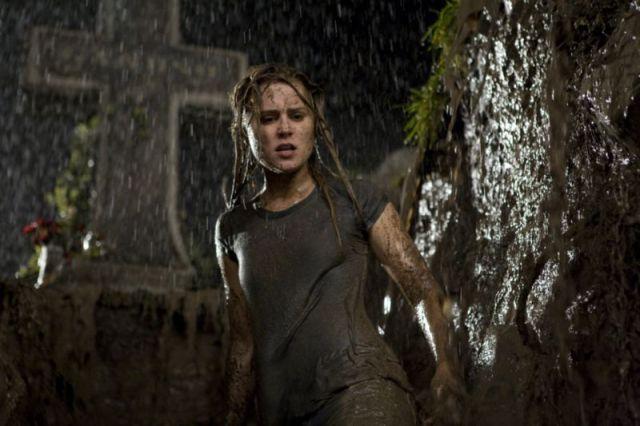 Drag Me To Hell (Movie Review)

There used to be two Sam Raimi's roaming this world. The first one, known to horror fans the world over, is the creator of the "Evil Dead" series, perhaps one of the most beloved trilogies in all of horror. It's a series of films that started out as dark, straight up scary, and through two sequels merged into full on Three Stooges inspired lunacy.

Throughout the years we've watched him grow and mature, wading back and forth from the serious to the macabrely funny. Films such as "The Gift", "A Simple Plan", "The Quick and the Dead"... all were part of a larger learning process for Sam. It's a process that saw its natural maturation when he was hired to direct the big budget remake of "Spiderman", and its two sequels. That's what I'll call the second Sam. The Sam that commanded big budgets and even bigger summer movie grosses. We're always proud of our directors when they go on to mainstream success, and conversely, always dream that they'll take that new found power and one day return to the genre. Now with "Drag Me To Hell", it's safe to say that Sam is back in a major way.

If you've seen the trailer for "Drag Me To Hell", you pretty much have all of the information about the plot that you need. Christine Brown is a former country bumpkin trying to make her way in the big city. She tries desperately to shrug her simple roots, even going so far as listening to tapes to try and help her hide her down-home accent. Her boyfriend Clay Dalton (Justin Long) loves her just the way she is, but his blue-blood parents are not helping Christine's insecurities. They look down on her and wish that he would get serious with someone in their own social strata, and their wishes do not escape Christine.

She works at a bank as a loan officer, a situation which comes with its own difficulties. Fighting for her rightful place in a male dominated business, Christine finds herself constantly at odds between her deeply ingrained values and her will to succeed. She's desperately gunning for a promotion at work, and is in the middle of a heated battle with Stu Rubin, a brown-nosing colleague who has a leg up on her simply by having a penis between his legs.

It's at this point that Mrs Ganush comes into her life. A disgusting, disfigured old hag of a woman, Mrs Ganush comes into the office and begs Christine to help her save her house that is being foreclosed on. Problem is, Christine just finished getting a lecture from her boss about how she needs to "make the tough decisions" if she wants to move ahead in her job, and so Mrs. Ganush proceeds to get the business end of security's foot as she's kicked off the premises for grabbing onto Christine's dress while groveling. Christine has picked the wrong day to try and act tough at work, and her reward is a big fat curse, placed on her by the old gypsy woman. She spends the rest of the film being tormented by an evil spirit that has been unleashed on her, and through the help of Rham Jas, a psychic and spiritual seer, tries everything in her power to stop the attack on her soul.

"Drag Me To Hell" is a loud, boisterous film. It also makes a lot of sense in the broader picture of Raimi's filmography. If you take the cartoonishly gooey, slapstick aesthetic of "Evil Dead 2", and mix it with the big budget summer-movie gloss of the "Spiderman" series, you would land smack dab in "Drag Me To Hell" territory. It's being called "classic" by many reviewers, which is something I agree with, but perhaps not in the way you're thinking.

It's is definitely an event film, a movie that's made to get your significant other sitting next to you to latch onto your arm like grim death. In reality, "Drag Me To Hell" is all style over substance. The jump scares are so over the top and so consistent, they're almost reminiscent of a William Castle-style gimmick like "The Tingler". After about the 4th or 5th time that you're assaulted by the loudest sound you've ever heard in your life, you start to picture Raimi sitting up in the projection booth with a jump-scare button, just waiting for his next chance to make his audience scream. I'm not sure if this makes any sense, but that's at the same time my biggest compliment and my biggest complaint about this film. Yes it IS style over substance, but when the style you're referring to is vintage Sam Raimi, it's hard to really hate on that.

Much was made of the film's rating being PG-13. With the exception of causing me to have to deal with throngs of tweens on opening night, it's hard to say that the rating change could have made a huge difference in the overall experience. As those familiar with Raimi's work know, the man has a talent for creating gore in such a manner that it is more disgusting than scary or offensive. The tone is so humorous here, it's hard to believe that the MPAA was offended by anything enough to give it an R rating on the first pass, but needless to say I will be very curious to see the inevitable "unrated" cut.

As far as the on-screen talent goes, I think that Raimi made a lot of great decisions. Alison Lohman is adorable, and proves herself as a competent actress, even if I'm still not sure where I'm supposed to know her from. Her character is really the only one in the film that is given much depth, and the script manages to sufficiently tug at your heartstrings when it comes to her plight. Those with an aversion to Justin Long will probably hate him here, but I've always thought of him as a decent actor with great comic timing. Being a Sam/Ivan Raimi scripted film, he gets plenty of chances to show off his comedic chops here. No one else in the film really gets to display a whole lot of range, but I will give Dileep Rao a shoutout as the spiritual leader Rham Jas. Finally, Lorna Raver is not scary as Mrs Ganush, but she certainly has gross nailed down, which was pretty much all the role called for.

"Drag Me To Hell" is a spectacle of a horror film. It's not really scary, or at least it won't be to hardened horror fans. It's meant to be fun, wacky, over the top and full of energy. On all of those counts it succeeds. The story and characters are frankly pretty pedestrian, so let's be honest with ourselves, it would be silly to try and claim that this film by any other director would be half as watchable.

The undeniable fact though is that this is truly a Sam Raimi film in all the ways we had hoped for. And in a summer/fall season that's faced with nothing but remakes and sequels, I will always support an A-list director deciding to bring an original horror property to big screens across the country. Some are hailing this as a true horror classic. I'm not sure I'm ready to go that far. In fact, I was getting pretty antsy by the time it was all ready to wrap up. I'll be damned if old Sam didn't pull me back in with that ending though. It's an ending that's so deviously, hilariously awesome that I can't really hate on the film too much. Looking for a final verdict? Don't let anyone tell you that it's the greatest horror film ever made. On the other hand, don't let anyone tell you that it isn't fun as hell... because they'd be lying.