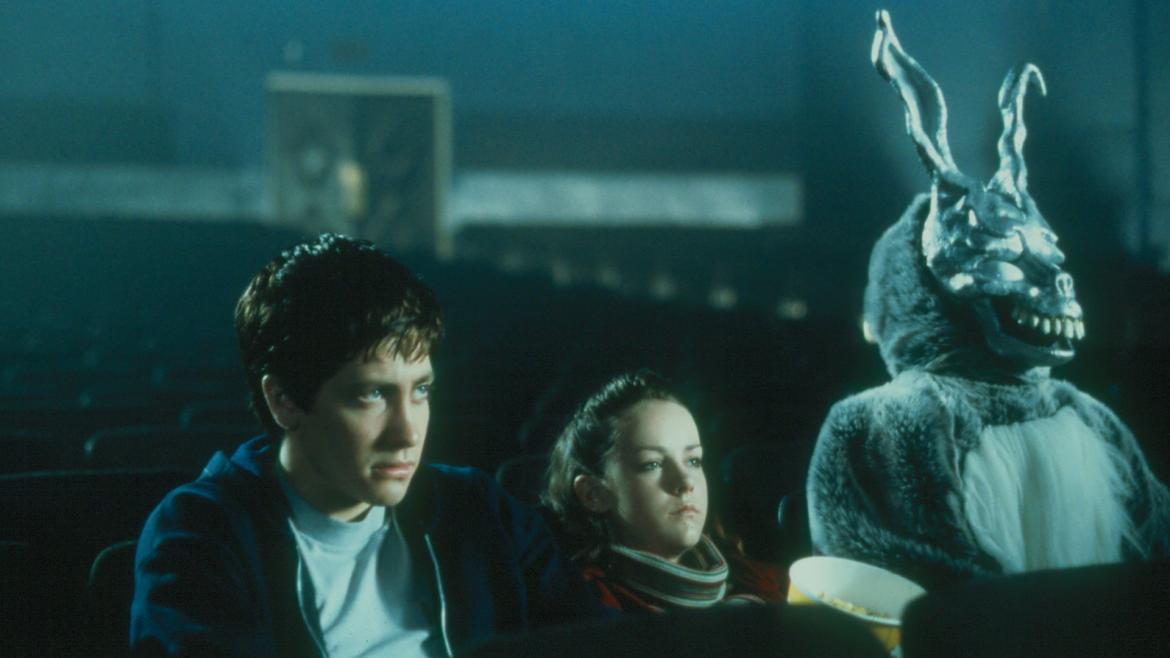 Perhaps one of the most important things a film should be is compelling. It’s a word that film critics love to throw around and at first glance could easily be dismissed as hollow, gobbledygook jargon. After all, it’s easy to view it as simply an overly complicated synonym for “watchable”, after all there’s plenty of terrible films that fill that mold. However, when you really drill down what makes a film compelling is more than that. Does it leave you with a feeling of mystery, visual panache and wonder? Does it hit those marks while getting the mechanics of an enjoyable film right like dialogue and acting? Does it make you want to come back to it, explore the potential mysteries both in your mind and the screen? 15 years later, the answer to those questions for Donnie Darko are yes.

If you haven’t seen the film, or simply need a refresher, Donnie Darko is the story of the titular character (Jake Gyllenhal) an emotionally troubled and discontent boy living in a suburban neighborhood plagued with the domesticities of his politically correct world as well as a nightmarish giant rabbit Frank who seemingly plagues him and encourages him to places he might not go otherwise. He lives his mother (the always wonderful Mary McDonnell) his father (Holmes Osbourne) and his two sisters (Maggie Gyllenhal and Daveigh Chase).

For all its musing on the purpose of life, time travel and reality which all go unanswered Donnie Darko really works best when it spends its time focused on the false veneer of immaculate suburbia brilliantly portrayed by the young Jake Gyllenhal. After all, Donnie’s real hang up in life is that the world presented to him day to day is really just an inescapable con job. Which is one of the reasons this film works so well as an introductory lesson for a young cinephile to the sort of dreamlike, Lynchian surrealism esthetic and why it resonates so long in the minds of certain individuals who saw it at the right stage in their life.

For those wanting answers or coherent narrative, Donnie Darko will still remain a frustrating experience which is only compounded by the additional 20 minutes the director’s cut brings to the table. Some will cite information online or elsewhere for those answers, but in reality what would have best served the film is to not try so hard and to allow that frustration to drive and captivate the audience. There are no answers for Mullholland Drive on the internet.

Donnie Darko is back in theatres on March 31st for its 15th anniversary and still remains and enjoyable, dark, surrealistic journey.